A symbol of romance

CAF president Ahmad Ahmad has paid the ultimate compliment to Warriors’ super fan, Alvin ‘‘Aluvha’’ Zhakata, describing him as a true heart of football whose extraordinary passion is providing the fuel that is helping to keep the game alive on the continent. 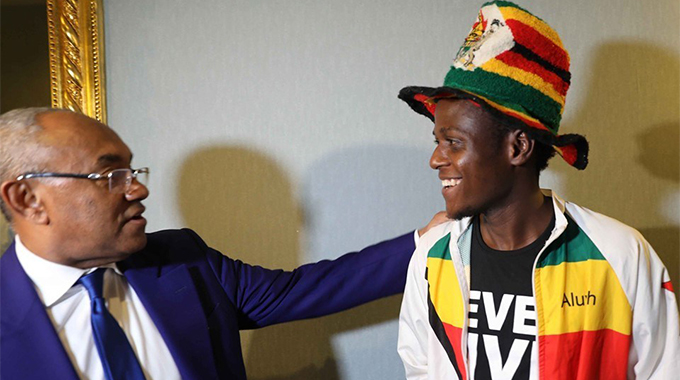 The daredevil supporter, who completed a Cape to Cairo road trip to be part of the AFCON finals, was yesterday honoured by Ahmad, who handed him a VVIP ticket to watch tomorrow’s AFCON final, as a special guest of the leader of the continent’s football controlling body.

‘‘Today, I met @AlvinZhakata, a young man (who) came from Zimbabwe to Cairo by foot to see the AFCON2019,’’ Ahmad tweeted. He’s the proof of passion that Africa gives to football.

‘‘What courage, I offered him, in the name of CAF a ticket for the final game. He’s a true heart of our football.’’

‘Cancellation of games a blessing in disguise’ . . . Fans…

StarFM sports editor, Steve Vickers, who is part of the television commentary crew of the 2019 AFCON finals, was a witness to the occasion.

He said Aluvha also had more interviews yesterday with Benin Sports, Egyptian, South Africa, Kenyan and Tanzanian media as his story continues to fascinate the world.

Vickers said Aluvha whispered to Ahmad for the continent’s leaders, like the CAF boss, to push for easy movement of Africans across the continent without visa hassles many usually confront.

Aluvha’s trip was almost prematurely ended after he ran into serious visa challenges at the Kenya-Ethiopia border and his compatriot, South African celebrity fan, Botha Msila, was forced to abandon the adventure and return to Nairobi where he caught a flight to Cairo.

But he will now be flown back home, courtesy of CAF, after the intervention by top Nigerian journalist Osasu Obayiuwana, who has been fighting for him to be accorded special status by the continent’s football leaders.

Today, Aluvha and millions of his compatriots back home, will be glued to the draw for the 2023 AFCON qualifiers where the football gods could reopen the wounds inflicted by the Warriors’ disastrous 2019 Nations Cup finals campaign, by throwing them into the same qualifying group with two of the three teams they faced in Egypt.

The next AFCON finals will be in Cameroon in two years’ time.

While, the Warriors cannot face all the three teams they battled in Egypt – the Pharaohs, the Cranes of Uganda and the Leopards of DRC – they can be placed in a group that features two of those sides when the draw for the 2021 AFCON finals is held in Cairo today.

They could avoid all of the three sides, but take on either Algeria or Senegal, who battle for the AFCON trophy in Cairo tomorrow, or take on Nigeria or Tunisia, who clashed in the tournament’s third-place play-off match yesterday.

Or, they could face either Zambia or South Africa, in their group, although they cannot meet both teams – in the 2021 Nations Cup qualifiers.

According to the format of the draw, if the Warriors are drawn in a group that, for example, has hosts Cameroon they cannot face any of the rest of the heavyweight teams – Senegal, Tunisia, Morocco, DRC, Nigeria, Ghana, Egypt, Burkina Faso, Mali, Cote d’Ivoire and Algeria who are all in Pot 1.

And, in the event they get regular opponents like Guinea, for example, in their group, they cannot face any of the following teams – South Africa, Cape Verde, Uganda, Zambia, Benin, Gabon, Congo, Mauritania, Niger, Kenya and Libya, who are all from Pot 2.

Of course, the Warriors will have to take on one of these teams, in their group – Madagascar, who wrote the fairytale of the 2019 AFCON finals, Central Africa Republic, Namibia, Sierra Leone, Mozambique, Guinea Bissau, Angola, Malawi, Togo, Sudan and Tanzania.

Incredibly, the Warriors could also find themselves in exactly the same group they had during the 2019 Nations Cup qualifiers – the DRC, Congo-Brazzaville and Liberia – in their quest to, for the first time in their history, book a place at the AFCON finals for the third straight tournament.

There will be four teams in each group with the two top teams qualifying for the 2019 AFCON finals but, for the group that features hosts Cameroon – who have an automatic place at the tournament – only one of the teams will accompany the Indomitable Lions to their party.

The teams in Pot 5 – Liberia, Mauritius, Gambia, South Sudan, Chad, Sao Tome and Principe, Seychelles and Djibouti – will have to play preliminary round elimination games, on a home and away knockout basis, with the remaining four then joining Pot 4 to be drawn with the rest for the group games.

CAF announced last week that the draw for the 2021 Nations Cup will be held in Cairo today, the same day the organisation will also be holding its 32nd Ordinary General Assembly meeting.

The continent’s football governing body used the FIFA world rankings, as per last month, for the draw and Senegal were the top African side, Tunisia in second place, Nigeria in third place, Morocco in fourth place, the DRC in fifth place, Ghana in sixth place, Cameroon in seventh place, Egypt in eighth place, Burkina Faso in ninth place and Mali in 10th place.

Zambia, who failed to qualify for the last two AFCON finals, were thrust into Pot 2 for the 2021 qualifying draw because, at 81st place on the FIFA world rankings last week, Chipolopolo were one of the highest placed African sides.

And, they will have the likes of South Africa, Cape Verde and Uganda in that pot.

Madagascar, who reached the quarter-finals of the current AFCON finals, are in Pot 3, because they were ranked 108th in the world last month, and are the top team in that pot, followed by the Warriors, who were ranked 109th, and only three slots separated them from Libya and Kenya who made Pot 2 ranked 105 in the world.

Although the Warriors topped a qualifying group that had the DRC and Congo-Brazzaville with a three-point cushion, and taking eight out of a possible 12 points from the two Congolese sides, they still had to settle for Pot 3 while the two neighbours, separated by the Congo River, made Pot 1 and Pot 2.

‘Cancellation of games a blessing in disguise’ . . . Fans urge local authorities to…