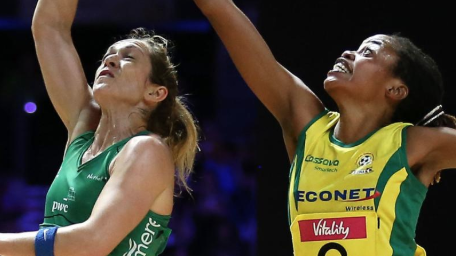 Zimbabwe Gems beat Northern Ireland 51-49 at Netball World Cup. Zimbabwe shot at 96% scoring 51 of their 53 attempts. While Northern Ireland’s shooting (79%) once again let them down a little.

They just didn’t seem as coherent as usual. They’ll need to brush off and go again on Monday.

As for Zimbabwe, they believe they can win the whole, thing, and I’m not going to be arguing with them (and their fans).

In tears, Zimbabwe captain Perpetua Siachitema said: “We really wanted to win this so badly. Thank you to our fans and sorry for almost giving them a heart attack.”

Zimbabwe player of the match Felisitus Kwangwa speaking to Sky Sports: “It was really tough for us. They made it difficult. We couldn’t lose, we wanted to make our nation proud. We needed this so much.

“It is living the dream. I really needed this moment and I am so happy about it. We are fighting to finish in the top eight.”

Northern Ireland Dan Ryan speaking to Sky Sports: “A gutting way to finish the game but in terms of the spectacle and quality of netball it was a great game to be a part of.

“There’s a lesson to learn in trust. It’s what the World Cup is all about. Our players stopped trusting in each other. You lose faith in your teammate and that’s so important.”

They huffed and puffed but just couldn’t push ahead enough to put daylight between themselves and Zimbabwe, who kept on coming back.

“It was built on teamwork and team work really prevailed today.

“We are ready to take on anyone and we will get as far as we possibly can.” BBC Sport