A man who stabbed a passenger to death in a row on a train has been found guilty of murder and jailed for life. 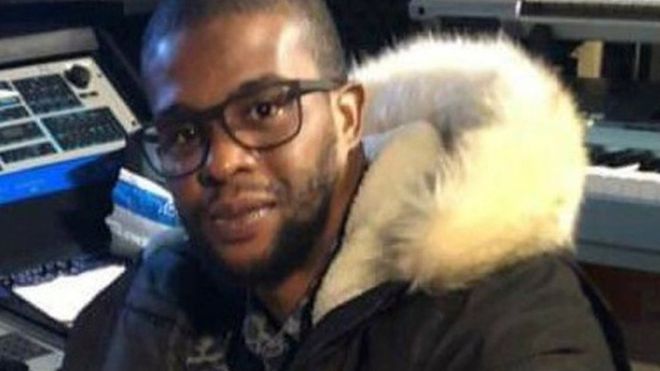 Lee Pomeroy was travelling with his 14-year-old son when he was “savagely” stabbed 18 times by Darren Pencille on the Guildford to London service.

Mr Pomeroy died with his son next to him at Horsley station on 4 January, the day before his 52nd birthday.

Old Bailey jurors rejected Pencille’s claim he acted in self defence and he was ordered to serve at least 28 years.

Mrs Justice Cheema-Grubb said anyone who watched the “breathtakingly shocking” CCTV footage shown during the trial would struggle to see how Pencille could claim to have been acting in self-defence.

“I am satisfied you were the aggressor throughout,” she told him.

The judge told Pencille “you picked on the wrong man – he stood up for himself”, but she also said Mr Pomeroy had not known about Pencille’s paranoid schizophrenia.

Sentencing, she said: “Truly this was a senseless loss of life.”

Pencille killed the father-of-one when a “chance encounter” escalated into a frenzied and fatal attack, the court heard.

He first stabbed the IT consultant in the neck, then inflicted 17 more injuries in the 20 seconds that followed.

Pencille’s girlfriend Chelsea Mitchell, of Farnham, Surrey, was found guilty by a majority of 11-1 of assisting him.

She was sentenced to 28 months in prison.

Charles Falk, representing Mitchell, said in mitigation she had showed a “misguided sense of loyalty driven by her dependence.”

The judge said to her: “I am sure you were acting under misguided loyalty”, but then added it was not any sort of excuse.

Jurors had heard how Mitchell picked Pencille up after the killing.

She took him to her Farnham flat, where they lived together. There he shaved off his beard and had a shower before she drove him to a Surrey beauty spot and then on to visit his flat in Bognor Regis, West Sussex.

They returned to her flat later that night and were both arrested there in the early hours after a manhunt by police.

The court heard a victim impact statement from Mr Pomeroy’s widow, Svetlana, who described his murder as a “senseless loss of life” which had been made worse because it happened in front of their son.

She said: “I miss my husband every day and to compound the situation [his son] was with his father when he died.

“I have lost my friend, my soul mate and my guide. Lee loved life and it’s been cruelly cut short.

“On Friday January 4 my life and that of my son changed forever. My husband of 18 years died in a sudden, violent and distressing way.”

She said her husband was a vibrant, highly intelligent perfectionist, a loving father and her “guiding light”.

With regards to their son, who cannot be named for legal reasons, Mrs Pomeroy wrote: “He’s frightened to be alone at night. He is terrified of loss and of losing me. He’s returned to school but seems to have lost perspective.”

Mr Pomeroy and his son got into the same carriage as Pencille at London Road, Guildford, and made their way down the aisle before the row started.

Jurors heard they may have been blocking Pencille’s way, prompting him to make the remark: “Ignorance is bliss.”

The row escalated into swearing as Mr Pomeroy demanded an apology, but then Pencille produced a knife and stabbed him in the neck, cutting through the jugular vein.

The court heard Pencille, who declined to give evidence during his trial, had 14 previous convictions for 19 difference offences over a 19-year period, including possession of offensive weapons, violence and dishonesty.

In 2010, he had stabbed a flatmate in the neck over a minor disagreement.

He said: “Although he claimed innocence, Pencille did not give evidence in court. His claims to be acting in self-defence were proved to be false.”

Mr Cordon-Bowen said: “This was a brutal and senseless killing of an innocent father who has been taken away from his family.”

He said: “Quite clearly with his previous convictions, where he also stabbed another man in the neck, and his propensity for carrying knives, he showed his dangerous, aggressive nature and that he wasn’t afraid to use that knife on that train.”

Mr Blackburn said a brief argument resulted in a moment of “shocking violence” that ended with the death of an adored father, husband, brother and son.

He said: “No argument, however heated, should result in the violence seen that day and no family members should ever bear witnesses to the violent death of a loved one.” BBC News