A University of Zimbabwe student was grisly murdered and thrown into Mazowe Dam by yet-unknown assailants. 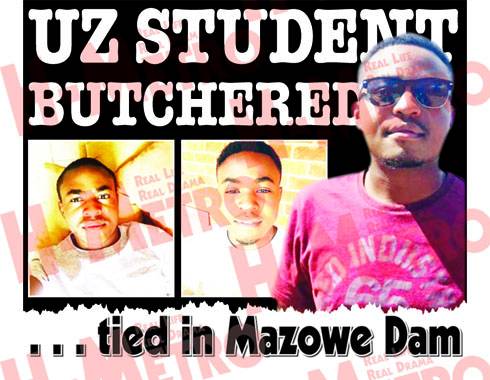 Tinotenda Zveguta’s (23), lifeless body was found floating in the dam on Sunday with hands tied to his legs by cable ties.

The deceased was also found with lacerations and wounds on his body which could point to being attacked before being thrown into the water.

“We cannot rule out foul play and we are still investigating.

“Further investigations will provide pointers from the time he went missing, people he was with up to the time he was found dead,” Ass Comm Nyathi said.

The family yesterday could not be drawn into commenting on the issue with the elder brother saying he was busy attending to some issues.

“We are very saddened by the untimely death of Tinotenda Zveguta a part 3 student from the faculty of Vet Science.

“As the University of Zimbabwe students’ union we extend our heartfelt condolences to the family and friends. May they find solace and comfort in the Lord.

“We will organise a bus for students to attend the burial in Hurungwe,” he said.