Bafana crash out of Cosafa Cup 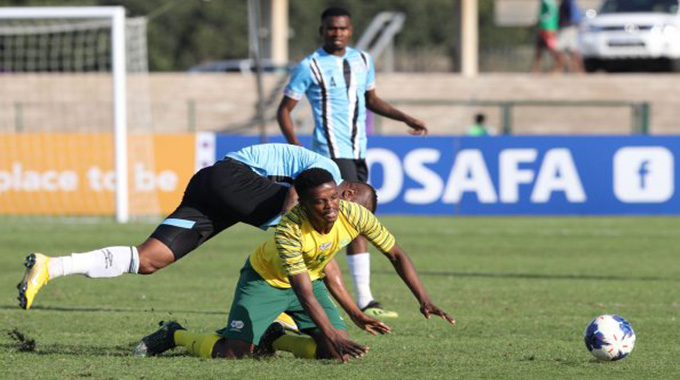 Bafana Bafana have crashed out of the Cosafa Cup, losing to Botswana on penalties at the Princess Magogo Stadium in Durban yesterday.

The game started well for South Africa as Stuart Baxter’s men cruised into a comfortable 2-0 lead after Luther Singh opened the scoring in the 19th minute. Grant Margeman doubled the advantage in the 28th minute after some brilliant build-up play.

But it wasn’t all one way traffic, with Joel Mogorosi and Gilbert Baruti testing South African goalkeeper Reyaad Pieterse with chances of their own, as the teams went into half-time with the score still 2-0 in favour of the hosts.

Botswana pulled a goal back early in the second half thanks to Lebogang Ditsele before the visitors equalised in stoppage time to send the game into penalties where they prevailed 5-4 after a Teboho Mokoena spot kick was saved by the Botswana keeper.

Although South Africa were nowhere near full strength for this fixture, the loss will be a blow to their morale before the African Cup of Nations in Egypt. – Sport24.co.za

Court battle against cancellation of ZEP in SA postponed…

Fourth Zimbabwean dies in SA after mob attacks in Limpopo…

Zimbabwean immigrants in SA live in fear of the unknown…

South Africa will bid to stage the 2027 Fifa Women’s…

Foreign prophets and pastors will no longer get permits in…

R75m worth of cocaine hidden in oranges, shipped to the UK from South Africa

Court battle against cancellation of ZEP in SA postponed indefinitely