The backing from Barcelona’s club president Josep Maria Bartomeu came but it was not as convincing as before. 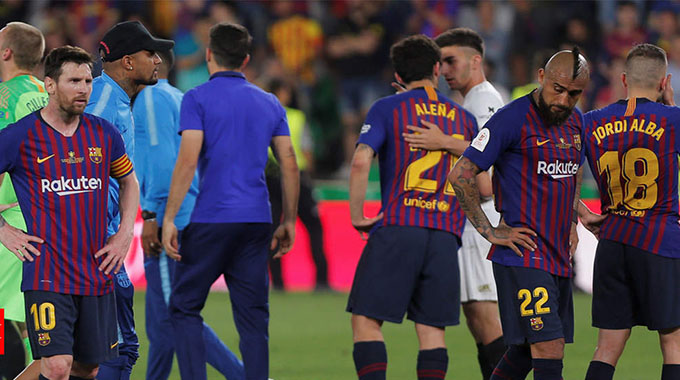 Last week he said coach Ernesto Valverde was “trusted completely” but as Valencia’s players danced on the pitch at the Estadio Benito Villamarin, tossing the Copa del Rey between them, his support felt more reserved.

“Ernesto has a contract for next season,” Bartomeu said. “He’s the coach. I don’t think this defeat is his fault.”

When asked about Valverde’s future on Friday, Lionel Messi indicated he wanted him to stay, the captain’s approval perhaps even more significant than that of the president.

“I honestly believe the boss has done an impressive job during his time in charge,” said Messi. “I would like him to continue.”

But that was before the 2-1 final defeat to Valencia on Saturday, which, despite a second-half surge, inspired by Messi and his goal 17 minutes before the end, leaves a title-winning season swamped in disappointment.

Valverde has never been loved at Camp Nou, the question marks hanging over him to do with issues less tangible than results.

After all, in La Liga, they finished this season 19 points ahead of Real Madrid, whom they beat by an aggregate score of 10-2 over four matches, and 11 clear of Atletico.

Instead, his sceptics complain about style, seen as overly-rigid, and suitability, a 55-year-old in charge of his sixth club, sensible and statesmanlike, but lacking the fizz for a coach of Barcelona.

The two arguments are linked and, until now, lacked evidence to give them weight. But perhaps doubts can be self-fulfilling and when Rodrigo headed in Valencia’s second on Saturday night, the players may have begun to believe them too.

“It has been a good year,” said Gerard Pique. “But we expected to do a much better year. The taste is bitter-sweet.”

Bartomeu must now decide if Valverde can take Barcelona where they desperately want to go, to victory in the Champions League, and if not, who could.

There is a summer sale on super-coaches but none of Massimiliano Allegri, Jose Mourinho or Antonio Conte are proponents of the Barca DNA.

At the other end of the spectrum is Quique Setien, a football purist regularly linked in the past, except he has just parted ways with Real Betis for failing to match style with results.

Or former midfielder Xavi, with a sense of destiny and very real adoration of the fans. He has the trophies too but fewer days, let alone clubs, as a fully-fledged coach.

Any successor to Valverde would be charged with improvement, which could only mean winning the Champions League, a reassertion of identity and, now, rejuvenation.

It would be unfair on Valencia’s determined, gutsy performance to say this final was a game Barcelona never wanted to play.

But for 30 minutes before halftime, they were flat, disheartened by Kevin Gameiro’s opener and, in the end, defeated by Rodrigo heading in again 13 minutes later.

Each time, Valverde’s players looked beaten, drained of the conviction that made them champions, instead gazing into space and wallowing in self-pity.

When Barcelona won the league with three games to spare last month, Bartomeu felt confident enough to declare: “We want the treble”.

If it looked like he was putting pressure on his players, it was because they believed too. They took a 3-0 lead over Liverpool, with a potential final to come against either Ajax or Tottenham.

Beat a Valencia side still struggling even to make La Liga’s top four and all three major trophies would be theirs. It seemed within touching distance.

Instead, 41 almost faultless weeks have been undone in less than three.

When the final whistle blew, Valencia’s staff and substitutes rushed on, past Barcelona’s players, some of whom sank to their knees. Others just trudged off, eager for it all to be over. —SuperSport