Zimbabwe Achievers Awards UK has released the full list of the Chairman’s Honorary Awards recipients who will be honoured at the upcoming 9th Anniversary ZAA UK awards ceremony which will be held on the 25th of May in London.

The Chairman’s Honorary Awards are given annually at the awards ceremony in recognition of various individuals and organisations who have contributed positively to fields of business, arts, leadership, media, sport and many more.

The honorary awards are handed out after considering the lifetime impact, influence and contributions to a cause by the recipient.

Business mogul and innovative entrepreneur Sir Richard Heygate will get an honorary Award as a Friend of Zimbabwe due to his part in endorsing Zimbabwe as an investment destination and his investments in solar power, agriculture and new business innovation.

He is also international agent and advisor for the world’s largest construction company; China Railway Group and is popularly known for his business innovations, having been part of the team that created the world’s first online Automated Teller Machine (ATM).

The Honorary Award for Services to Community Development is going to be given to Zimbabwe International Women’s Awards founder Juliana Jonathan who has been instrumental in the recognition and empowerment of inspirational women who are making moves within and beyond their communities.

The award will be conferred on her in acknowledgement of her efforts in bringing the unsung heroines of communities to the public consciousness and writing a new narrative for Zimbabwean women. 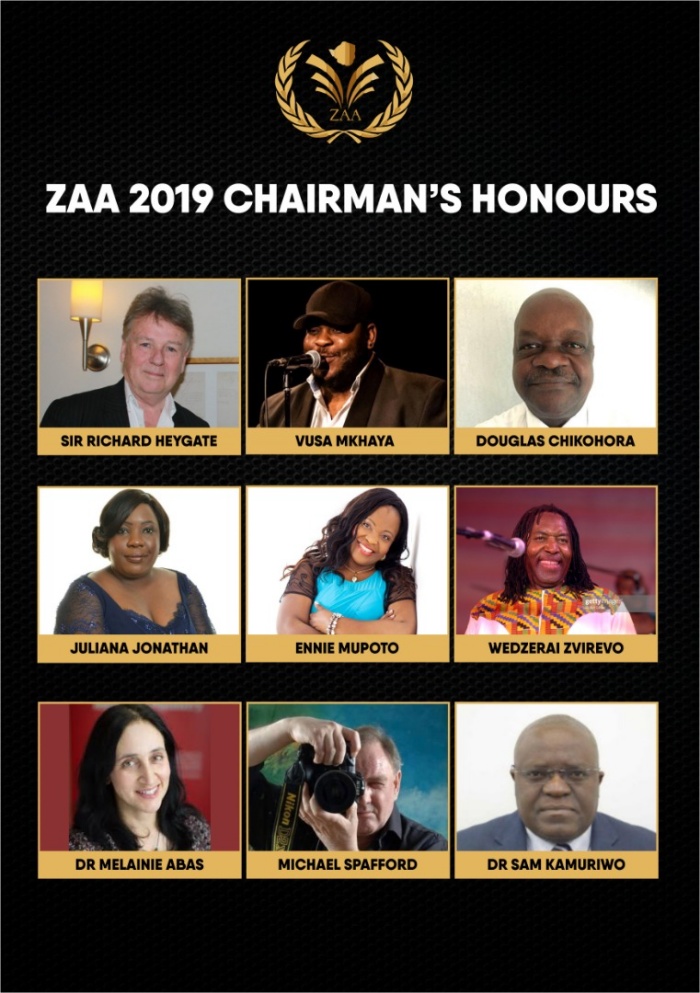 Vusa Mkhaya will be honoured with the Honorary Award for Services to Music and Cultural Promotion in recognition of his exporting of Zimbabwean art and through his music and initiatives abroad in a way that has cast the spotlight on the country’s rich heritage and diverse art culture.

Music and performance guru Wedzerai Zvirevo will also be honoured for his achievements. The Batanai Marimba group frontman is also a music instructor and has worked with various groups and organisations.

Dr Melanie Abas will be honoured with the Friend of Zimbabwe Award mainly in recognition of her extensive work in raising awareness and solutions for mental health matters and improving the quality of life in Zimbabwe through the Friendship Bench and various other partners.

Friendship Bench assists many people battling anxiety, depression and other mental health challenges. She has also researched, published and mentored widely on depression issues especially in low and middle income countries and the Friendship Bench initiative in Zimbabwe is the largest depression program in any low income African country and has developed models for integrating depression care in primary care.

Dr Sam Kamuriwo will receive the Honorary Award for Services to Academics and Leadership for his contributions to the world of academic and business leadership. The CASS Business School Associate Professor has also inspired many through his extensive research works and award winning contributions to academia.

Douglas Chikohora will also be honoured with an Award for Services to Business and has over 30 years’ worth of experience in business and creating opportunities and development of businesses in the country and is the co-founder of CLUFF Associates Africa (CAA Ltd) together with Algy Cluff.

The company mainly focuses on mining, in particular non-gold explorations in Africa focusing on energy minerals like coal, uranium and industrial minerals. His work is recognized all around Africa and beyond. Entrepreneur Ennie Mupoto will be honoured for Services to Business at the event.

The More Care Energy Services(MECS) founder and owner will join an illustrious list of past recipients that include jeweller Patrick Mavros, Dr Ian Chikanza, Lettie Chimbi and Filekephi Jackson among others.

The ZAA UK Awards Dinner Gala will be held on Saturday 25th May 2019 at the Millennium Gloucester Hotel in London and tickets are purchased online on http://www.zimachievers.com/uk/buy-tickets/