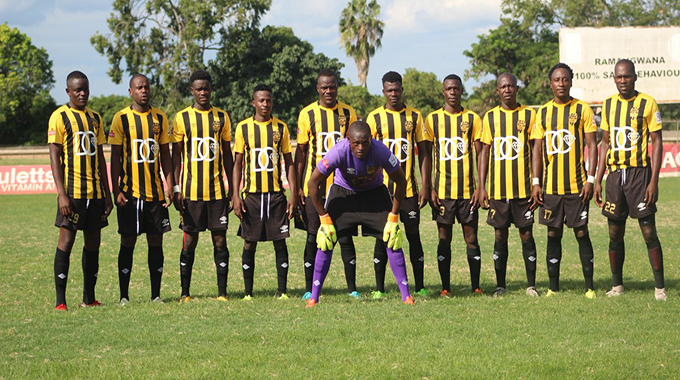 The expensively assembled Manica Diamonds came into the match under pressure after losing 2-0 against Caps United in their first league match last weekend.

Manica Diamonds had to come from a goal behind after conceding a second penalty in as many games.

Harare City took the lead on the 24th minute through Moses Muchenje who converted from the spot.

Probably, it would have been a different story altogether…

Manica Diamonds restored parity from the spot in the 44th minute through Tendai Kachambere.

The Gem Boys, as they are affectionately by their legions of fans, sealed the match with second half goals from the impressive Marshall Mudehwe in the 78th minute before Timire Mamvura put the final nail on Harare City’s coffin two minutes later.

Manica Diamonds gaffer Luke Masomere was ecstatic after the win.

‘’We were more organised than what we did against Caps United. We are now looking forward to our next match against Triangle at this stadium (Gibbo) and it is going to be an interesting match, it motivates us to play good teams,” he said.

His counterpart Mark Harrison said Manica Diamonds deservedly won the match and was not happy with his players’ character in the opening two games.

‘’They deservedly won the match, the players were disappointing today (yesterday), we are going back to the drawing board so that we can correct our mistakes, we have a good squad and players,’’ Harrison said.

Manica Diamonds had a slow start to the match and they were almost punished just three minutes into the match after goalkeeper Jorum Muchambo made a suicidal error but thanks to Charlton Munzwamba who cleared the ball off the line after Ishmael Wadi’s effort at goal.

Manica Diamonds had their first real chance in the 11th minute when they won a free-kick on the edge of the box and Mudehwe’s shot was tipped over the bar for a corner by Maxwell Nyamupanedengu.

Harare City, who were pressing harder for the opener, were finally awarded a penalty in the 27th minute after Mpelele handled inside the box and referee Jimmy Makwanda correctly pointed to the spot.

And upstepped Moses Muchenje who sent Muchambo the wrong way for the game’s opener.

Harare City went to concede a penalty with just two minutes before the breather.

Tendai Kachembere did not hesitate to take the spot and scored his side’s first goal in the Premiership.

Manica Diamonds created more chances than their counterparts after the breather and were duly awarded with a nicely taken shot from Mudehwe outside the box in the 78th minute.

Probably, it would have been a different story altogether for CAPS United