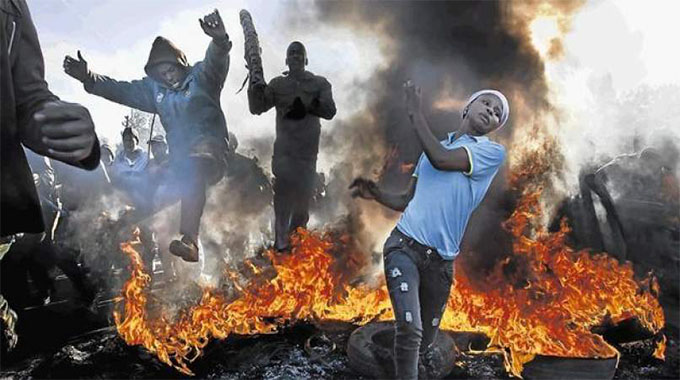 Human rights activists have condemned xenophobic attacks in South Africa, calling on the South African government to act before the violence spirals out of control.

Thousands of foreigners, including Zimbabweans, have been displaced in the neighbouring country following sporadic attacks mainly in Polokwane and Durban.

The locals are reportedly accusing the foreigners of taking their jobs and occupying their economic space.

South Africa keeps the largest number of Zimbabweans, estimated at over three million, who have been running away from the economic challenges in their motherland.

During his recent election campaign, South African president Cyril Ramaphosa also complained about the influx of foreigners who were setting up business in the country without following due processes.

“Everybody just arrives in our townships and rural areas and set up businesses without licences and permits, we are going to bring this to an end. And those who are operating illegally wherever they come from must now know…,” Ramaphosa was quoted saying.

Reports from South Africa say foreigners are being raided, attacked and pushed out of their homes with their properties being destroyed.

This is not the first time that the country has experienced such attacks.

South Africa is now dogged with a history of discrimination and violence, with most recent incidences happening in 2015.

Human Rights Watch southern Africa director Dewa Mavhinga, writing on the organisation’s website, said South Africa must work towards implementing its plan against xenophobia and stem the dangerous tides of intolerance for good.

He said virtually no one has been convicted for past outbreaks of xenophobic violence, including the Durban violence of April 2015 that displaced thousands of foreign nationals, and the 2008 attacks on foreigners, which resulted in the deaths of more than 60 people across the country.

“To effectively combat xenophobia, the government and police need to publicly acknowledge attacks on foreign nationals and their property as xenophobic and take decisive action.

This should include ensuring proper police investigations of xenophobic crimes and holding those responsible to account,” said Mavhinga.

“Inflammatory public statements — such as those made by Johannesburg mayor Herman Mashaba in December 2016, blaming illegal immigrants for crimes and calling on them to leave the city — should be strongly condemned. As South Africa prepares for national elections on May 8, 2019, political leaders should not incite xenophobic violence or promote discrimination,” Mavhinga said.

War veteran and politician Margaret Dongo said politicians must watch their statements that have the potential of inciting violence, especially the leaders.

“South Africa must know that it is not an island, today they are chasing away foreigners but they do not know what tomorrow holds for them. We housed many South Africans in Zimbabwe during apartheid and our houses were bombed but we never let them down. We are long friends in arms and there is no reason they should butcher our people like that.

“They are part of Sadc and need to be a good example and have to play an important role in the issue of violence. How can they be able to deal with violence in Zimbabwe when they are being violent on our people? They are not even considering that we are grieving after the devastating Cyclone Idai. I think Ramaphosa must withdraw his statements. I am calling upon all Sadc and the continent to call an emergency meeting to stop this before many lives are lost,” Dongo said.

Commenting on the same issue, the country’s biggest opposition political party the MDC, said there was an urgent need to address the xenophobia issue.

MDC leader Nelson Chamisa’s spokesperson Jacob Mafume, said the South African politicians need to be measured in terms of their speech as they campaign ahead of the elections.

“Our party, however, appeals to the conscience of South Africans particularly those in positions of authority considering our country is still mourning deaths of citizens who perished in the recent cyclone. Our nation cannot bear the pain of losing more lives in xenophobic attacks. We specifically urge those on the campaign trail to be careful when dealing with the issues that can raise emotions and tension.

“At least three people have been killed and property destroyed. This is why the MDC has consistently encouraged the South African government to take ownership of the Zimbabwean crisis particularly facilitating dialogue to end the ongoing political and socio-economic crisis. Finally, the MDC urges the Zimbabwean Embassy in South Africa to be proactive in ensuring the safety of Zimbabweans in South Africa,” Mafume said. DailyNews

Zanu PF in vote buying ahead of by-election