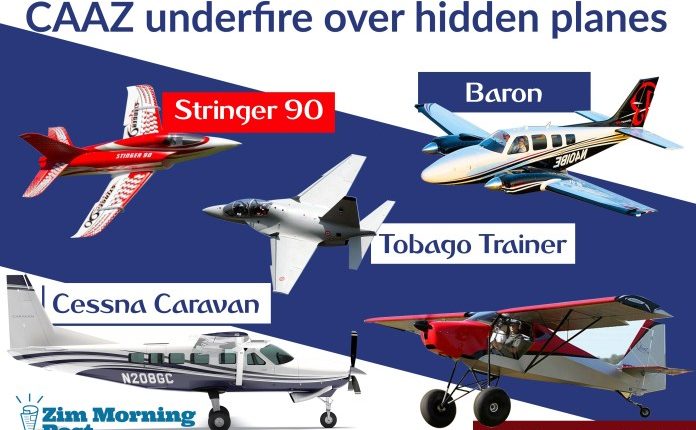 The scandal-ridden- Civil Aviation Authority of Zimbabwe (CAAZ) has come under fire for allegedly ‘hiding’ 12 planes that were donated to the country by France to help the country start a flight school 20 years ago, the Zim Morning Post can reveal.

Investigations by this publication established that the planes were donated by France after two African countries turned the French offers down.

The 12 planes have, for close to 20 years, been kept at the government hanger at Charles Prince airport in Mt Hampden.

“Two planes, the 406 Cessna Caravan 2, are parked at the District Development Fund (DDF) hanger at Charles Prince,” said the source.

Govt to install new radar as dozens of planes sneaked in…

Sources said the “beneficial ownership certificates for the planes are said to be missing,” in a development that makes one to ‘smell a rat’.

Inside sources said some top CAAZ officials (names withheld) had ulterior motives and wanted to ‘steal’ the planes and start an aviation academy.

“The guys had plans to start an aviation academy so they kept the planes idle so that they will be forgotten and struck off the CAAZ inventory list.

“Recently, they tried to take advantage of the confusion surrounding the change over of administrations (Operation Restore legacy) and take over the planes,” revealed our source.

The planes in question include Cessna 406 Caravan,Tobago Trainer, Stringer 90 and Barons.

The small aircrafts are widely used for military training and touring .

“The planes are depreciating and losing value by the day yet CAAZ is refusing to dispose them.”

Insiders also told this publication that businessman and legislator Kenneth Musanhi once offered to buy the planes but the CAAZ management turned down the offer.

“Musanhi approached CAAZ with two offers… First he wanted to service all the 12 planes and let CAAZ retain two of the birds and second offer was that he buys all of the planes and service them but the management refused,” narrated our source.

Contacted for a comment Musanhi confirmed that during the former president Robert Mugabe’s era he tried to buy the planes.

“I wanted to refurbish the planes for local commercial use but CAAZ simply refused to release them,” said Musanhi.