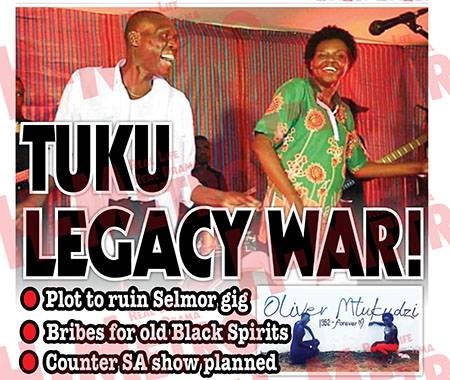 There were reports last night of a plot to sabotage Selmor Mtukudzi’s gig scheduled for Andy Miller hall on March 29 in what sources believe is a bitter war over the late national hero, Oliver “Tuku” Mtukudzi’s legacy.

Selmor’s gig is running under the theme “Tuku’s music lives on” and she has enlisted the services of former Black Spirits members like Eric “Piki” Kasamba for the performance.

The show is being held in memory of the late national hero Oliver “Tuku” Mtukudzi.

For Selmor, it’s a “Thank You” gig to Zimbabweans who gave her father a befitting send-off as well as a launch pad for her to keep the legacy alive.

Businessman Josh Hozheri is behind the show being held in memory of the late crooner.

Now it was claimed last night that visits are being made to the former Black Spirits members who had expressed willingness to share the stage with Selmor on March 29 with cash offers.

There were unconfirmed reports that there are efforts to stage a counter gig in Cape Town, South Africa on March 29 with those old Black Spirits members being part of the show.

Unconfirmed reports say prolific guitarist Mono Mukundu and drummer Sam Mataure have pledged to assist Selmor as she starts a new page in her career.

“The Selmor Mtukudzi & Friends Concert has earned her more foes than friends,” said the mole.

“A syndicate is targeting ex-Black Spirits members who are sympathising with Selmor and they are willing to pay money to them so that they sabotage the show.

“As it stands, Selmor should have a strong line-up with substitutes in case she gets deserted on her special day.

“We also hear that Piki Kasamba was targeted by the same syndicate so that he snubs Selmor’s show.”

Although Piki could not be reached for comment at the time of going to print, it emerged that he was one of the artistes targeted and had been paid a visit.

In an interview with H-Metro, show organiser Hozheri remained defiant that the show would go ahead.

“Nothing will stop the show event though there are plans by rivals to sabotage it.

“I have been cleared by the National Arts council of Zimbabwe, police and all the relevant authorities and the show is definitely going on.

“If there are people trying to sabotage Selmor, I just say ‘shame on you’ because she has done nothing wrong,” said Josh.

Selmor, who is busy with rehearsals, has vowed to keep her father’s legacy alive and will not dwell on the politics surrounding her new path. H-Metro

Save Our Hospitals Zimbabwe initiative sets into motion