An entrepreneurial cancer survivor has created the first false lashes for chemotherapy patients – after receiving her own diagnosis just hours before attending an interview for a place at university.

Mother-of-two Codilia Gapare, now 41, from Cheshire had always dreamed of becoming a lawyer and started studying as soon as she came to the UK from Zimbabwe at the age of 26.

In July 2014, at the age of 36, she finally had the qualifications she needed to apply for university, but just hours before her interview she was diagnosed with breast cancer.

Tragedy as Zim family lose sister and dad from coronavirus…

Zimbabwean mum in the UK finds her business inspiration…

Although she was offered a place, she was forced to drop out due to her illness, but she’s now completing the final year of her Masters in Business Admin after winning a scholarship.

She’s also about to launch her first false eyelash collection in Boots, inspired by her experience of losing her hair, eyebrows and lashes during chemo.

‘I hope my story inspires someone out there,’ Codilia told Femail. ‘I realise that life comes without guarantees. Sometimes we win and sometimes we lose. But whatever the situation, we always, always have a choice.’

‘I found a lump in my right breast in July 2014 and immediately made an appointment to have tests,’ Codilia told Femail.

‘The day of my results was the 11th August 2014 – the same day I was due to have my final interview for a place studying law at Manchester Metropolitan University.

Just three hours before I was due to have my interview at the uni, I returned to Leighton Hospital to find out I had breast cancer. My world went into slow motion. I had somehow persuaded myself, over the past ten days, that I could not possibly have cancer.

‘I thought I was too young, too black, too skinny and too active to have cancer, but I was wrong. I was now part of a statistic that no one wanted to be part of.

‘It is hard to imagine how one would deal with such news. I suppose I would have been forgiven for crying or going home and bury my head under the covers or even go to the pub and drown my pain. I did none of these things.

Straight after her heartbreaking diagnosis, she drove from Crewe to Manchester for her interview.

‘I don’t think at this point I knew why I had decided to make this choice. The interview went really well until the interviewer asked me if I knew of anything that might interfere with my study,’ she recalled.

‘Had I anticipated the question I am sure I would have lied. I was caught off guard and I decided to come clean and tell the truth.

‘I told the interviewer that I had been informed I had breast cancer only three hours before.

‘It was only when she asked me why I still made the decision to come that I understood my actions. I said: “For as long as I can remember I have wanted to be a lawyer. Today I received news that could potentially derail my dream, but I have worked too hard to get to this point”.

She added: ‘Cancer is just a chapter in my book and is never going to define me, but this moment will. So if it’s all the same with you, I would be grateful if you could give me a chance to follow my dream.’

Codilia was subsequently offered a place on her dream course but was forced to stop once her cancer treatment started. ‘I was so upset as I had put so much effort into getting to that point. But all was not lost – in 2016, I won a scholarship through Women in Business to study a Masters in Business Admin at the same university.

‘I am currently in my final year of study which goes to show that everything happens for a reason!’ explains Codilia who had her most recent check-up in December 2018 and everything came back clear.

Now she’s also preparing for her lashes to hit the shelves, after she approached Boots with her idea last year. 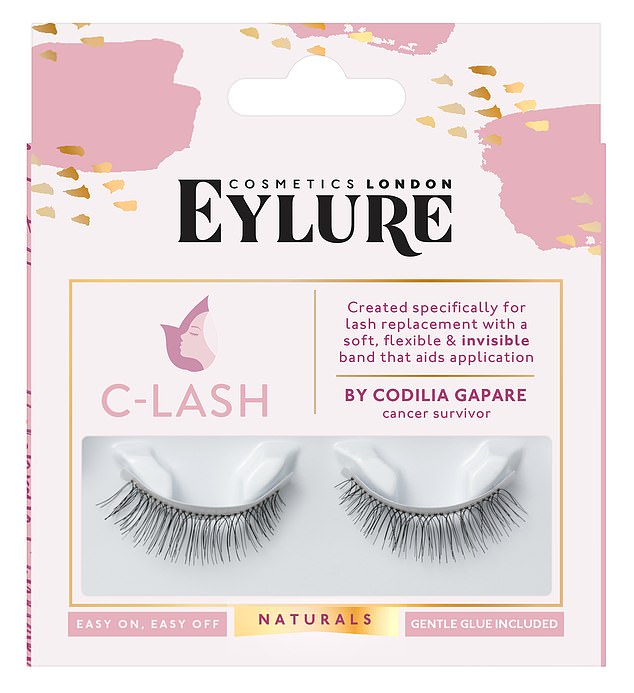 After creating a prototype, she entered ‘C-Lash’ – that Codilia says stands for ‘compassion’ and ‘confidence’ – into several competitions, including Richard Branson’s Pitch to Rich. But it wasn’t until she approached the high street giant in 2018, that her product started to take shape.

‘Boots loved my pitch but as a start-up business, I didn’t have the necessary resources to supply such a big order. They put me in touch with Eylure – one of their trusted partners that they’d worked with for years,’ she explained.

The introduction was a success and she collaborated with Eylure to create C-Lash by Codilia Gapare that’s set to land in Boots stores in March and online from 26th February.

With a choice of ‘natural,’ ‘lengthening’ or ‘volumising’ styles, the lashes, at £5.25 a pair, come with a clear adhesive band that’s larger than average. While remaining invisible, it creates a more solid foundation for the lashes to stick to the eyelid.

There’s also a temporary glue – that uses a gentler formula than usual – included for those wanting extra lasting power.

‘Life never works out quite the way you expect it to. In fact someone once told me that “life” is what happens to you while you are busy making plans,’ she said.

‘This does not always have to be a bad thing, because if you open yourself to possibilities, life can take you to places beyond your wildest dreams.

‘I’ll always remember 11th August 2014 as a turning point in my life because of the choices I made. It was the day I chose to dance in the rain instead of waiting for the storm to pass,’ says Codilia.

Codilia Gapare: From Masvingo to surviving Cancer in the UK… then striking…

Zimbabwean mum in the UK finds her business inspiration through illness