Zimbabwe’s representatives in the CAF Champions League, FC Platinum refused to be cowed into submission, restricting former African champions Orlando Pirates to a goalless draw in a sold out Barbourfields stadium yesterday.

Pure Platinum Play were making their first appearance in the competition’s group stages but the big difference in experience never showed against the mighty Sea Robbers.

FC Platinum are in a tough group which includes reigning African champions Esperance of Tunisia and Horoya AC of Guinea.

Yesterday’s result means the group is evenly poised after Horoya and Esperance also played a one all stalemate in Guinea last Friday. 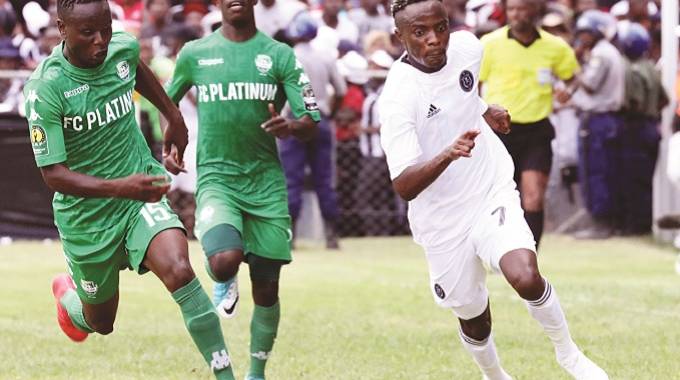 The match was played in a packed Barbourfields, arguably the biggest crowd at the venue since the turn of the millennium when Highlanders used to rule the local football scene.

Disappointingly though, the huge crowd was behind the visiting team which won several Zimbabwean hearts with their penchant for local talent and Highlanders supporters just love to be associated with the Happy People.

Coach Norman Mapeza said the brief for his men in this competition was to enjoy the ride after reaching the group stages.

The astute gaffer is happy with the way his charges have fared so far and was satisfied with the point Pure Platinum Play gained ahead of Friday’s match against Esperance in Tunis.

“It was a good game of football, the guys really worked very hard and for me as a coach this is really a positive result.

“Of course we wanted to win the match but this is a positive result I am more than happy with a point.

FC Platinum looked comfortable on the ball in the early exchanges but it was the visitors who created better goal scoring opportunities from the onset.

Mhari was nonetheless having none of it, producing a brilliant shift between the goal posts, denying the irresistible Soweto giants’ attacking threat on numerous occasions.

Tembinkosi Lorch was the first to be set free by the Buccaneers, followed by Innocent Maela but captain Mhari stood tall to deny the duo on both occasions.

Warriors forward Kuda Mahachi came into this duel on the back of a brilliant form and was also menacing in the final third but was restricted from taking shots at goal by his compatriots.

To their credit, the miners were refusing to be cowed into submission and had genuine chances to break the deadlock when midfield sentinel Kelvin Madzongwe tried from range but his effort was pushed wide for a corner by Pirates keeper Jackson Mabokgwane.

The Zimbabweans also had a penalty appeal waved away by the officials midway through the first half.

After the breather, the visitors came a better side and demonstrated the difference in class and experience between the two sides.

Moments later Mahachi received the ball in the box but failed to hit the target after striking the ball with his weaker foot.

The evergreen Farai Madhanaga had a good game in central midfield and could have done enough to charm South African scouts.

Midway through the second stanza he also tried to break the deadlock but his strike was wide.

Orlando Pirates coach Milutin Sredojevic was happy with the support they received from their legion of supporters in Zimbabwe.

“It was a nice and very competitive match, firstly I would like to say it is very nice to come to a country you are very welcome.

“Our team is very much loved here and we want to thank the supporters for coming in their numbers and supporting us.

“We played against a very competitive side and we needed to get every detail like a game of chess, they came up with a setup we did not expect.

“We came here needing to tighten the back so that we do not concede and secondly to go forward and get that all important goal,” he said.

Dzvukamanja ready to unleash the ‘beast’ in him at Pirates