Barbourfields sold out, thousands turned away

They came, they saw but they did not conquer.That would be the tale of South Africa’s Orlando Pirates visit to play FC Platinum at Barbourfields Stadium yesterday as they lit up Bulawayo, drawing a bumper crowd and getting a bigger chunk of the support from the fans that thronged the city’s ceremonial home of football.

The moment it was announced FC Platinum would be playing their Caf Champions’ League group stage first match against the Sea Robbers at Emagumeni, an air of excitement, anticipation and anxiety filled the City of Kings. Bulawayo being a hotbed of Orlando Pirates fans saw several people talk up the need to be “patriotic” and support FC Platinum for the “national cause”. The debate raged on social media with supporters standing their ground on which team they are going to back.

In the week leading to the game yesterday, black, white and red shirt and track suits seemed to have been thrown around like confetti as Pirates fans took out their regalia showing love for their team.

And cometh match day, the fans did not disappoint as they thronged BF, making it the largest crowd in living memory akin to numbers that Highlanders used to attract at the turn of the millennium when they went on a four year streak of winning the league championship.

This soccer supporter watches the CAF FC Platinum match against Orlando Pirates while perching by the fence after Barbourfields Stadium was filled up to capacity.(Picture by Eliah Saushoma)

Fans began arriving at the stadium as early as 11am as they were eager to watch their favourite team and it was not long before Barbourfields proved too small a venue for the match. Long winding queues started forming at around midday and one hour 20 minutes before kick off the stadium was full, but more people were still making their way into the venue. 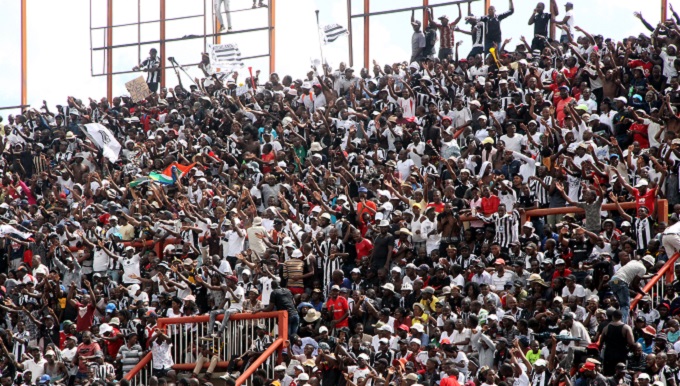 When the match started people were still streaming into the stadium and a sea of black and white was formed at the iconic Soweto stand and eMpankweni that was packed with Pirates supporters, most wearing Highlanders’ famous black and white stripe as they took advantage of the similarity of the two clubs’ colours.

The Mpilo End was turned blue and green as FC Platinum fans teamed up with a host of Dynamos fans to back the home team. There was no room left to move in the stands as it was packed to the rafters with some fans being forced to watch the match standing next to the perimeter fence.

Zifa officials revealed the 23 000 tickets they printed for the match ran out with only a handful of VVIP tickets said to have been left. At half-time, most entrances had run out of tickets but there were still hundreds of people seeking entry to into the stadium.

Zifa vice-president, Gift Banda, former Warriors captain Benjani Mwaruwari, ex-Bosso striker, Zenzo Moyo and Warriors liaison officer Eddie Chivero and a host of journalists had a tough time getting into the stadium due to the huge crowds that swelled at half time.

The crowd even had Highlanders coach, Madinda Ndlovu green with envy as he marvelled at the huge turnout and he can only work twice as hard to see such numbers turning out for a Highlanders match. Pirates captain, Happy Jele expressed pleasure and surprise at the huge backing from Bulawayo.

Bulawayo certainly had a weekend to remember as the match attracted football lovers from all over the country with some coming from as far as Harare, Beitbridge and Mutare to witness the game.

The match proved the hunger people have for quality football and most certainly their love for Orlando Pirates who should consider visiting Bulawayo another day to thank their fans. Sunday News.