Hopewell Chin’ono: ZIDERA is not the main factor in Zimbabwe’s demise

I have written extensively before arguing that The Zimbabwe Democracy and Economic Recovery Act (ZIDERA) is indeed unhelpful, but I refuse to accept that it is the root cause of our suffering, it isn’t.

Doing so would be intellectually dishonest and an act of blind partisanship or selfishness or both.

Even President Emmerson Mnangagwa said this in January of 2018, he said that we can fix our country if we resolve our own internal contradictions and distortions like corruption, incompetence, nepotism, grand theft and many such evils that he said needed to be done away with through a reform program.

ZIDERA was only an after effect, five years later after our economy had started spiralling out of control in 1997 when the war veterans had been given an un-budgeted US$4000 stipend per person and thousands of dollars in disability allowances.

Typically of our way of doing things, that fund was looted through the use of false declarations that were aided and abetted by Chenjerai Hunzvi who today lies at the national heroes acre.

We were failing to service our World Bank and IMF debts through economic mismanagement before ZIDERA was in place.

Where do we place the sanctions imposed on us by the millions of dollars spent on diamond rings by people like Grace Mugabe and her ilk, they bought a million other trinkets which has become a habit of our political elites to this very day?

Money that was taken directly from the central bank, the very same bank that is dispensing Bond Notes to people who had deposited their money in US Dollars.

I refuse to be hoodwinked by arguments that seek to camouflage the deep-rooted corruption and incompetence in our government, something that even former President Robert Mugabe and the current President Emmerson Mnangagwa have publicly acknowledged. 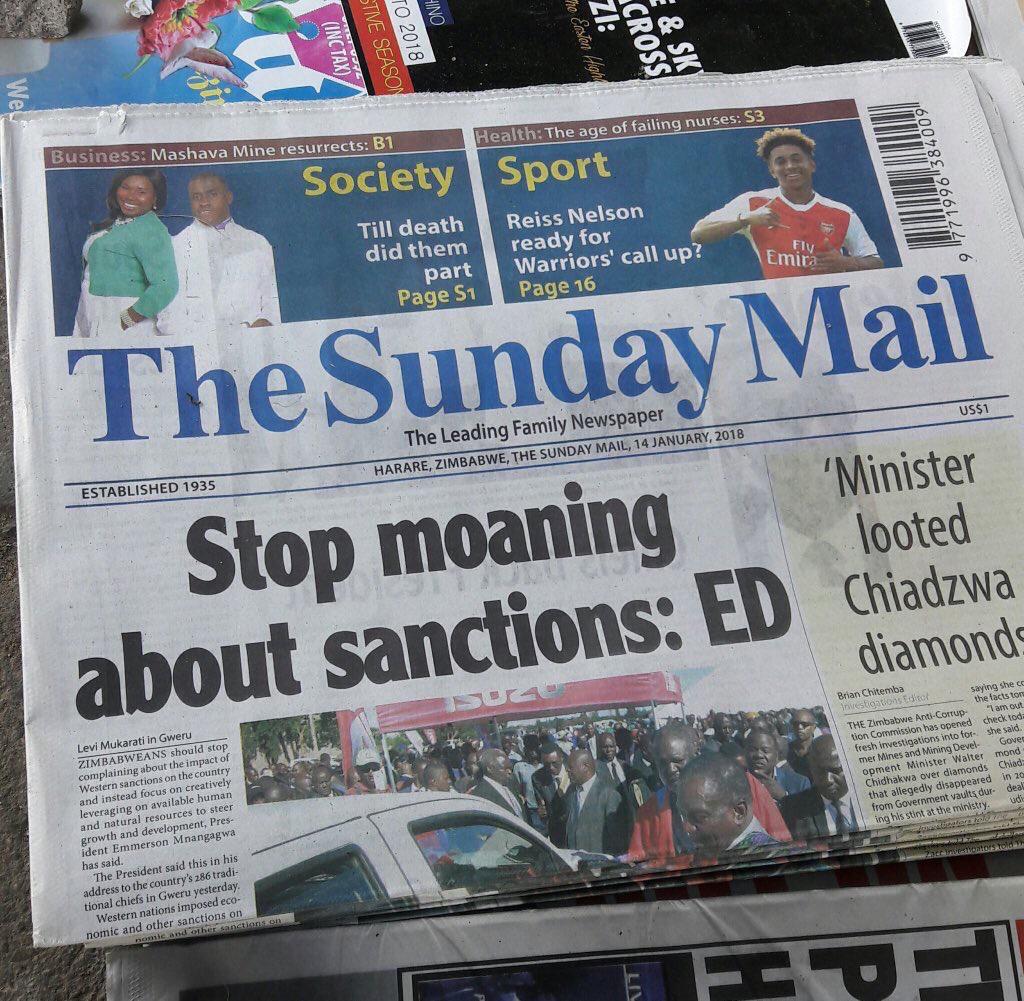 Those who are peddling the ZIDERA argument fail to quantify it because they know very well that they are being disingenuous with their one track argument, it is a single story of our economic demise.

How much has been lost to the Zimbabwean economy through corruption, incompetence, grand theft and nepotism versus what has been lost through ZIDERA?

We also conveniently forget about our un-budgeted Congolese adventures that cost the taxpayer over US$300Million just before the turn of the century.

I find it incredulous that one can rant about ZIDERA and yet disappears once we start talking about apparent corruption, incompetence, and embezzlement and overspending by the Zimbabwean government.

I also find it crazy that one can rant about ZIDERA and yet they disappear when we talk about the genuine grievances underpinned in ZIDERA like reforming our media, repealing repressive laws, aligning our laws to what is no longer a NEW constitution.

The “new constitution” is now six years old for goodness sake, and yet we are not aligning our laws to the supreme law! WHY?

Those are the real sanctions, if you are serious about this country moving forward, that is what you should be talking about, not harping on about a ruse used to mask the real reasons for this mess.

We have been spending more than what we have earned and yet the same ZIDERA merchants are quiet when delegations of 30 to 40 fly a whole Jumbo Jet from Harare to New York for an Oceans summit.

Progressives should never allow the sanctions narrative to be hijacked by dishonest citizens who fail to see any wrong with our very own internal sanctions.

I would never want to be on the side of a dishonest and crooked history of lies regardless of how much one is being offered to sell their soul!

Remove the local sanctions first then we can take your ZIDERA yelping seriously, otherwise spare us those crocodile tears.

We have given farms to people who are not farming, those are the personal sanctions that I am talking about, we are having to import green beans from Malawian peasant farmers, and yet I do not hear that being talked about from the other side.

Why? Could it be because they are beneficiaries and maybe they are part of that rot?

Only people who are able to look at both ends of the argument with the same scrutiny can talk about ZIDERA, not uncritical sycophants!

ZIDERA is unhelpful and not good for us, but unfortunately it is being legitimized by the local sanctions imposed on us by the current ZANUPF government.

As soon as our government removes the drivers for corruption, incompetence, nepotism, and repressive laws and it aligns our laws to the current constitution whilst reforming the media, everyone will rally behind them.

I am not talking about personal demands or opinions here, I am talking about what the President said he would do after taking power in November of 2017.

When some of us asked for action after he came into office, we were told to wait because he needed an electoral mandate, he now has it, what is stopping him now from resolving the decades old distortions and contradictions?

We supported his agenda because it reflected what we had been fighting for during Robert Mugabe’s rule, although some people confused that support for partisan alignments.

Fourteen months later, we are still in the 1st Republic and Old Dispensation, nothing significant has changed.

I respect Strive Masiyiwa as an astute businessman and philanthropist, but even he knows that our problems are more complex than ZIDERA.

I have read and listened to his ZIDERA intervention, it is part of millions of understandings and narratives on the issue, but it stands out because of who he is not because of its legitimacy or cogent character.

I know that ZIDERA affects his borrowing and credit rating as a businessman with international financial institutions, but the internal sanctions affect millions of young people who have gone to University and have done nothing other than sell mobile phone airtime in the streets because of these self imposed sanctions.

If you want to know what a new dispensation really looks like, turn to Ethiopia where a 42-year-old Abiy Ahmed has captured Africa’s imagination after becoming Prime Minister, and not merely talking but delivering on expectations of his own people!

That is why Strive Masiyiwa is now looking at pouring his millions into that country as Foreign Direct Investment (FDI).

When we are done with Ethiopia, let us get answers as to why a country like Cuba that has been under sanctions for 56 years under the American Trading With the Enemy Act, has managed to have such a world class health care system that has become the envy of the Western world.

How does ZIDERA compare to the Cuban brutal trade embargo, one of the most debilitating economic tools ever used on any country in the 20th century. If we still can’t answer these questions honestly, then it is not yet Uhuru for us, and we will continue to live under this Big Deception!

I hope that the intelligence folks and those around the President are telling him the truth that his New Dispensation is now being mockingly called the New Deception, because the failure to feel the public pulse was the root cause of Mugabe’s demise.

Patriots support ideas and not individuals, they also tell the truth even where it is inconvenient!

The ordinary man and woman wants to rally behind the government to call for the removal of sanctions (ZIDERA), but what makes them hesitant is the lack of respect for the social contract between the government and the electorate.

Hopewell Chin’ono is an award winning Zimbabwean international Journalist and Documentary Filmmaker. He is a Harvard University Nieman Fellow and a CNN African Journalist of the year.
He is also a Fellow at the University of Oxford’s Africa Leadership Institute.

Hopewell has a new documentary film looking at mental illness in Zimbabwe called State of Mind, which was launched to critical acclaim.  It was nominated last week for a big award at the Festival International du Film Pan-Africain de Cannes in France.

You can watch the documentary trailer below.

Hopewell can be contacted at [email protected] or on Twitter @daddyhope

Local giants in the shade, challengers on the rise