DRC on edge as presidential election results are delayed

Preliminary results from Democratic Republic of Congo’s tumultuous presidential election will be delayed past yesterday’s deadline, the head of the election commission has said. 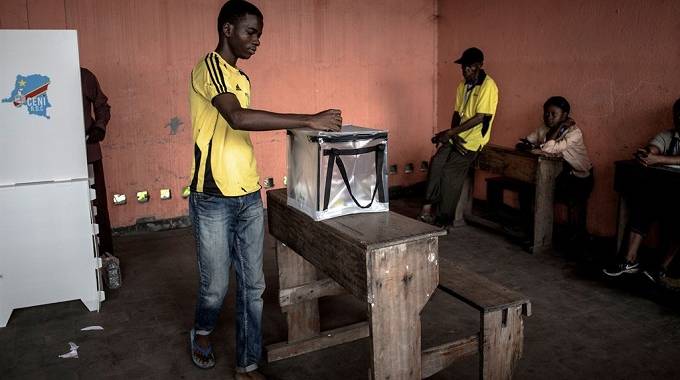 The announcement on Saturday has prompted fears the vote result could be manipulated, with analysts saying prolonged uncertainty could trigger deadly clashes, similar to the violence that broke out in the central African country after the 2006 and 2011 elections.

The commission, known as CENI, had received only 47 percent of vote tally sheets as of Saturday, its president, Corneille Nangaa, said.

It not yet clear when the results would be ready, he said, adding: “It will not be possible to announce the results tomorrow.”

Nangaa said the delay was caused by logistical problems posed by the DRC’s size, with the country encompassing an area approximately as large as Western Europe.

The country’s powerful National Episcopal Conference of Congo (CENCO), which represents the country’s Catholic bishops, warned popular anger could result in the event the final result was not “true to the verdict of the ballot box”.

DRC’s powerful Catholic Church, which deployed more than 40 000 election observers, had said Thursday it knew who had won the vote but did not name him as the country’s electoral regulations forbid anyone but the electoral commission to announce results.

In a letter to Nangaa on Saturday, CENCO president Mr Marcel Utembi said that, given the delay, “if there is a popular uprising it would be the responsibility of the CENI”.

The lengthy counting process has raised fears among opposition politicians and non-governmental organisations that the results could be manipulated to put Shadary in power.

Fayulu, Tshisekedi and the ruling coalition all claim to have won the vote.

The New York Times, citing an unnamed Western diplomat and a presidential adviser, said on Saturday that the church has determined that Fayulu won the election, with a lead of 30 points over Shadary.

Kabila’s ruling Common Front for Congo (FCC) coalition has accused CENCO of “seriously breaching” the constitution and electoral law by “illegally declaring voting trends” in favour of a given candidate.

Analysts warned of a heightened potential for violence should the uncertainty over Kabila’s successor continue.

“The state will want some more time to rig it, that’s what they are playing for, time,” said Reuben Loffman, a lecturer in African history and specialist in DRC history at UK-based Queen Mary University of London.

“If they release the results now they will immediately get exposed … the church would immediately come on to them,” he said.
Independent Central Africa analyst Kris Berwouts, meanwhile, said Kabila’s administration was “cornered” in the wake of the election.

“The plan was to organise the elections and independent of who people voted for and proclaim Shadary as the winner,” said Berwouts, author of Congo’s Violent Peace: Conflict and Struggle since the Great African War.

“Everybody at this point is extremely aware of the potential for violence … that potential exists because the regime organised the elections to win them and that seems to have become difficult … it will be extremely difficult [for the government] to keep things as they are,” he said.

Meanwhile, international concerns are mounting over the transfer of power in sub-Saharan Africa’s largest nation. The United Nations Security Council met on Friday to discuss how to react, but was unable to reach an agreement, according to an internal report seen by Reuters.

Both the United States and the European Union have urged Kabila to ensure a peaceful change of power in recent days.

On Friday, US President Donald Trump announced he had ordered the US military to deploy soldiers to Gabon, one of nine countries which border the DRC, to protect US citizens and diplomatic facilities should violence break out.

The DRC has never had a peaceful transition of power; its first democratically elected leader, Patrice Lumumba, was assassinated in 1961, one year after the country gained independence from Belgium.

Lumumba was succeeded by Mobutu Sese Seko, whose decades-long rule was marked by authoritarianism, brutality and corruption.

He was forced out in a 1997 coup by Laurent-Desire Kabila, who was in turn assassinated in 2001. – Al Jazeera

Ramaphosa to have ‘frank discussion’ with Zuma