Today I woke up to the South African Sunday Times reporting that the Zimbabwean Industry, and Commerce Minister, Mangaliso Ndlovu, has threatened to cancel operating licenses of businesses that are charging for goods in US Dollars.

First of all, it is not illegal to charge for goods and services in US Dollars, the greenback is in the basket of currencies that the central bank (RBZ) sanctioned for legal use in February of 2009.

Secondly, there is a rational explanation to why companies are charging in US Dollars for goods and services, they are importing raw materials using foreign exchange, and the central bank has no hard currency that can be accessed by these businesses when they need to restock!

‘It is politics stupid!’ Chin’ono on ZAAPA…

How will they restock if they charge for goods and services in a dead “currency” like RTGS and yet they use foreign exchange to import raw materials or finished goods?

The Reserve Bank of Zimbabwe clearly stated that the Bond Note was not a currency and as such, nobody can transact with it outside Zimbabwe. 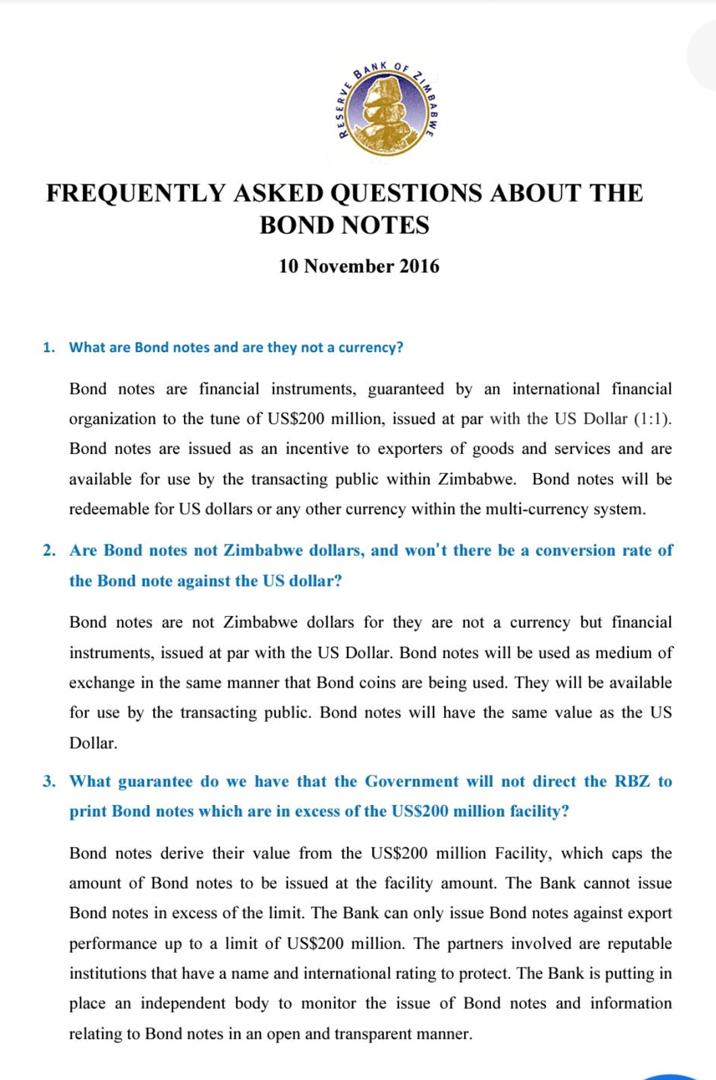 Finding lasting solutions should be the preoccupation of cabinet ministers and not issuing unhelpful threats.

Intimidation and threats scare away investors, Foreign Direct Investment is a coward, it will only come where there is economic order, sanity and where the Rule of Law is applied and not Rule by Law. 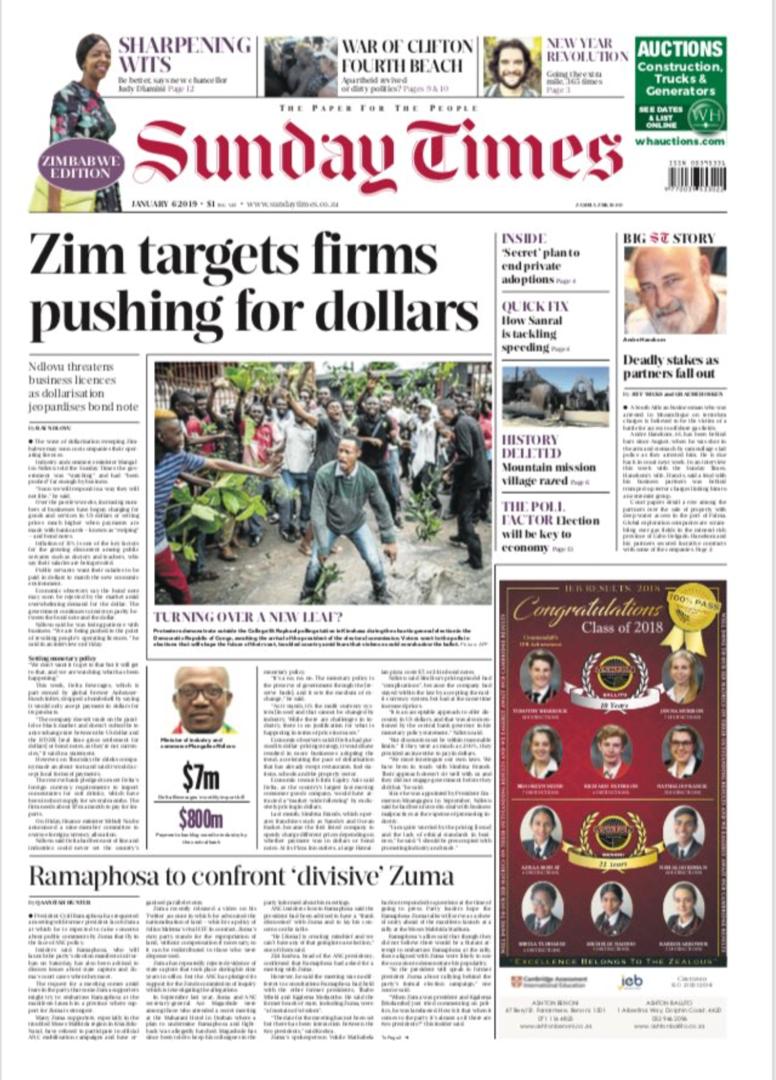 Telling a villager that he cannot insist on 4 goats or 1 cow for a tonne of maize will first of all drive maize sales underground, and you do not change that with another directive, maize production in the village will eventually stop if Rule by Law continues.

We all know what happened when Robert Mugabe tried these scare tactics in 2006.

Everything shut down and the supermarkets were empty, the Southerton industrial belt collapsed and to this very day many of the factories have nothing except cobwebs.

There was also a huge political price to be paid, Robert Mugabe was clobbered at the polls by Morgan Tsvangirayi and had to resort to brutal violence to retain power.

We should LEARN from our history, it is the best teacher and nothing else can surpass the lessons it offers.

Repeating the same thing that failed 13 years ago means that we have learnt nothing during the passage of time and also that we have lost 13 years of our lifetime.

Until we understand that fact and we start applying common sense and logic, we are not yet open for business.

And who leads that government? The President himself.

We are now looking at Belarus and Kazakhstan for economic respite, it shows a very deep level of not understanding the global economy, there won’t be any bright light from that tunnel.

If our friends of more than 50 years ago, Russia and China are not rushing in, it should tell you that the patient is ill.

Apply the right medicine and the patient will get better and attract the right suitors, otherwise we will end up doing deals that will leave an unbearable and unfortunate economic debt to future generations.

To my ZANUPF friends, be careful that you might be taking part in the last rites of your political party’s journey into oblivion, by not self correcting the tragic mistakes that have become the hallmark of ZANUPF.

The military can only do so much to protect its comrades and interests, but at some point nature will refuse to be controlled by guns and tanks.

You have a small window of opportunity to do the right thing, don’t allow yourselves to end up in a Gaddafi situation because it can happen.

Gaddafi was warned so many times, but like many dictatorships before him, he too thought that he would last forever, nothing lasts forever folks!

This country is now made up of a youthful majority, they have no jobs, and those with jobs are striking and not going to work.

That is a very dangerous ticking time bomb, even the fathers and mothers of these youths are tired too.

The last thing they want to read about in newspapers is a Minister issuing empty threats to cover up the Government’s incompetence.

The President promised to provide strong leadership during the election campaign, where is it sir?

We were promised that corruption will be a thing of the past and yet the country is choking with it.

What is the difference then with Robert Mugabe’s Rule where the politically connected prospered and the weak suffered in silence? 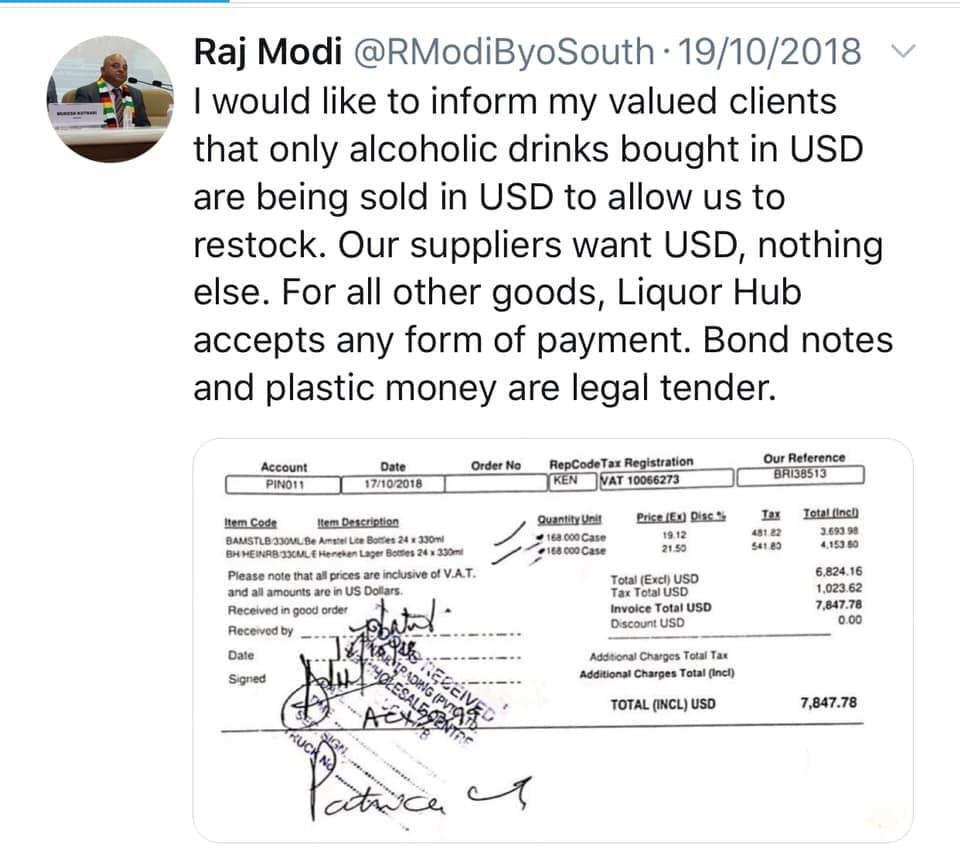 Shouldn’t charity begin at home or at the Trade and Commerce Ministry in this case?
Shouldn’t the Deputy Trade Minister lead by example?

It simply shows a Government that is struggling to come up with a cogent policy framework that is underpinned by the daily realities of life in Zimbabwe.

The President has many sub-group and individual interests at play across a society that is trying to do one of the most difficult transitions, but he needs to remind these groups and individual interests that it is indeed in their best interest to have a Zimbabwe whose economy is working and not a country that is always on the edge of social, political and economic tension.

One day that tension will blow up throwing all manner of unimaginable consequences.

Zimbabwe is not an Island, it cannot only subject itself to its own internal distortions and contradictions and expect to survive the world.

We must understand the relatedness of things in politics and the world economy, our neighbors and beyond will not come to the sort of party we are putting up at the moment, that is why the trade Minister finds himself in this embarrassing situation of having to regulate the country’s trade and commerce through threats.

We all need to read about the Chinese, Russian, and many post-Colonial countries in Africa and Latin America in order to understand how lack of firm leadership unraveled things.

Remembering what countries like Rwanda, Ethiopia, Tanzania, Ghana, Chile, Nigeria, Uganda, and many others went through before they got to where they are today is critical.

Countries in Southern Africa might be headed for a post-Apartheid violent social upheaval if a country like Zimbabwe does not manage a relatively peaceful transition from the immediate post-colonial administration.

He is a Harvard University Nieman Fellow and a CNN African Journalist of the year.
He is also a Fellow at the University of Oxford’s Africa Leadership Institute.

It was nominated last week for a big award at the Festival International du Film Pan-Africain de Cannes in France. You can watch the documentary trailer below.

Hopewell can be contacted at [email protected] or on Twitter @daddyhope

Lawrence Kamwi: Time to move beyond mere wishes and promises; let’s have truth

‘It is politics stupid!’ Chin’ono on ZAAPA warning to Mambo’s…