German football club Bayern Munich has fined its midfielder Franck Ribery after he posted a series of angry and profanity-laden tweets.

The French player, 35, was responding to criticism after he shared a video of himself enjoying an expensive steak coated with gold.

He hit out at “jealous” people and said he owed nothing to the “haters”.

The club’s sporting director did not specify how much Ribery had been docked but described the fine as “heavy”.

‘Bayern is my home’ – Liverpool target…

“He used words that we… cannot accept and that Franck does not have the right to use, as a role model and player,” Hasan Salihamidzic told reporters on Sunday. 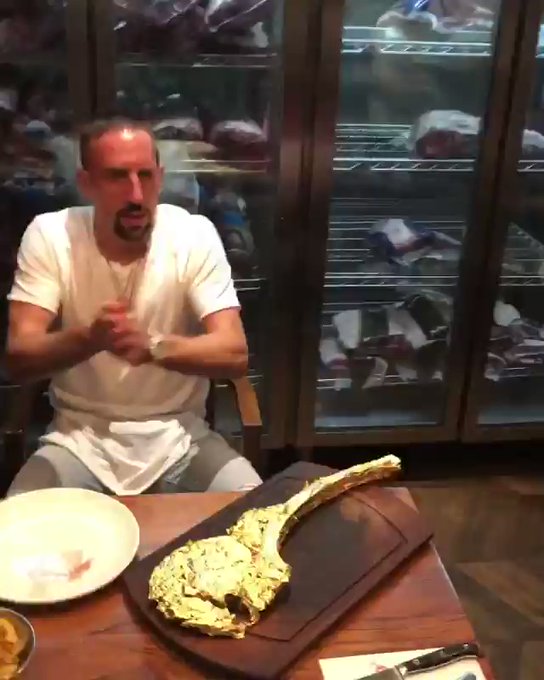 “I had a long talk with Franck and I let him know that we would impose a heavy fine on him and he accepted it,” he added.

The video showed the player at a restaurant in Dubai owned by Turkish celebrity chef Nusret Gokce, who is also known as “Salt Bae” on social media.

Ribery can be seen rubbing his hands as the huge steak, which reportedly cost £1,000 ($1,273), is prepared in dramatic fashion at his table.

It was met with a barrage of criticism from those who said the video was ostentatious.

“My success is, above all, thanks to God, me, and my loved ones who believed in me,” Ribery said in one of his posts.

The footballer criticised the media for ignoring his charity work.

He said he was free to spend his money how he liked. On this occasion, the club’s sporting director said Ribery had been invited to the restaurant and so did not pay the bill.

Why are footballers obsessed with Salt Bae?

Gokce owns several luxurious restaurants in the US, the Middle East and Turkey, and videos of him carving meat have been watched by millions of people.

He has served a number of celebrities, including footballers such as Cesc Fabregas and Kevin de Bruyne,

But this is not the first time that a well-known figure has been criticised for dining at one of his restaurants.

Almost two-thirds of people in the crisis-hit country have reported losing weight as shortages of food worsened in recent years.

Footage of Mr Maduro at the restaurant was widely shared by his critics who said he was out of touch with the problems facing Venezuela. BBC News.