Nigerian star Burna Boy has taken to Instagram to vent against his low billing on flyers for this year’s Coachella festival in the US. 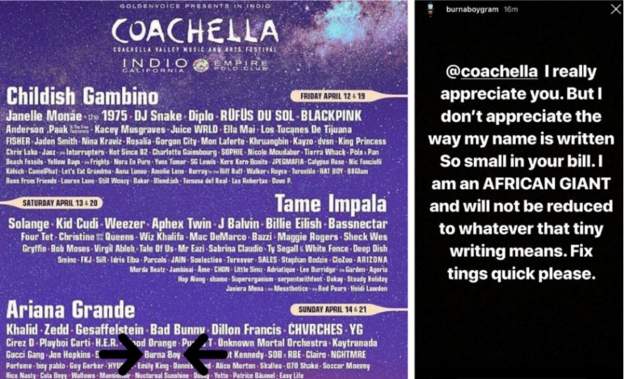 “I am an African giant and will not be reduced to whatever that tiny writing means,” the Afrobeats muscian wrote in a since-deleted post:

Coachella is one of the most famous festivals in the world and it’s reported that nearly 250,000 people went to it in 2017. It’s also regarded as a tastemaker.

This year’s inclusion of Burna Boy and fellow Nigerian Mr Eazi is a further sign that industry bigwigs in the US are waking up to the huge popularity of Afrobeats.

In the last two years, Sony and Universal Music have both established offices in Nigeria and struck publishing and distribution deals with up-and-coming musicians.

Coachella have not commented on Burna Boy’s statement. BBC News