Mukoko hit-maker, Tytan, at the weekend sparked a conversation online after posting a picture of him getting a tattoo written Olinda – his partner’s name on his forearm.

Posting an image of the inked hand on his social media pages, Tytan wrote: “What in the name of Uzumba did I just do? From today onwards Olinda, you’re not allowed to even dream of anyone else other than me. Even if I die, you’ll remain single till we meet again.”

Having your significant other’s name tattooed on your body is a no go area for many in the event that they separate.

Olinda threatens to sue blogs writing about Tytan being…

Also, a tattoo is difficult and very expensive to remove. So when people saw this gesture by Tytan, some hailed him while others felt he would likely regret it in the long run describing it as madness.

“The day she will divorce him, he will cry,” wrote one commentator. 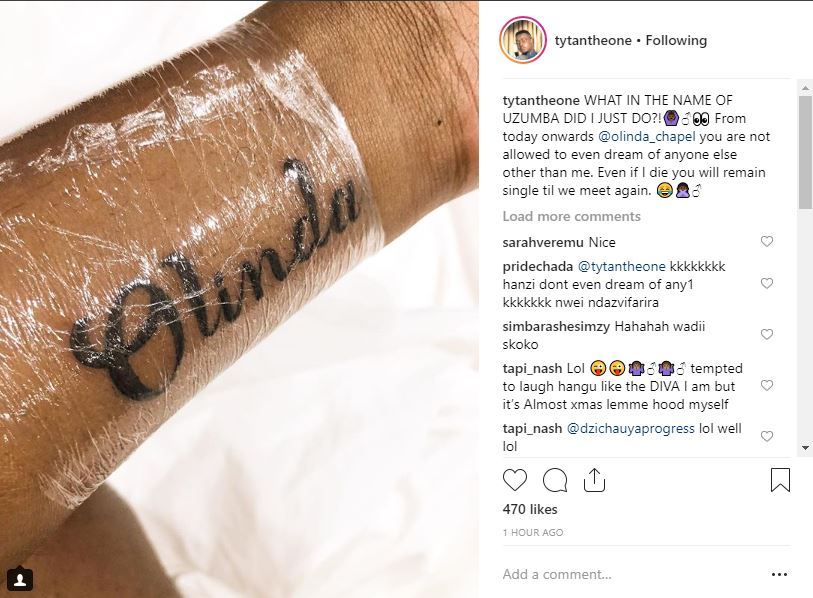 Reacting to Tytan’s post, Olinda, who is pregnant with his child, said: “Kana ariwako tanga wamunyora pamhanza (If they’re yours, put a tag on their forehead). Wangu anyora ega amana (My man wrote on his own). Shuwa munhu kupengeswa nelove kudai (This person is crazily in love)”.

One Chef Rumbie commented: “I love that. This shows you (Tytan) aren’t in your marriage with the thought of ‘what if we separate’. It shows the highest level of commitment.”

Some said Tytan inking Olinda’s name was no guarantee that she would not leave him while others urged him to take it slow in the relationship.

A Tytan challenge quickly spiralled on social media with people writing their partners’ names on their hands.

Tytan has followed in the footsteps of Hollywood stars like Angelina Jolie who inked former husband – Billy Bob Thornton’s name on her left arm and Marc Anthony who had Jennifer Lopez’s tattoo on his wrist.

Turkey in talks with UN about Khashoggi investigation

Khashoggi, other targeted journos named Time “Person of the Year”