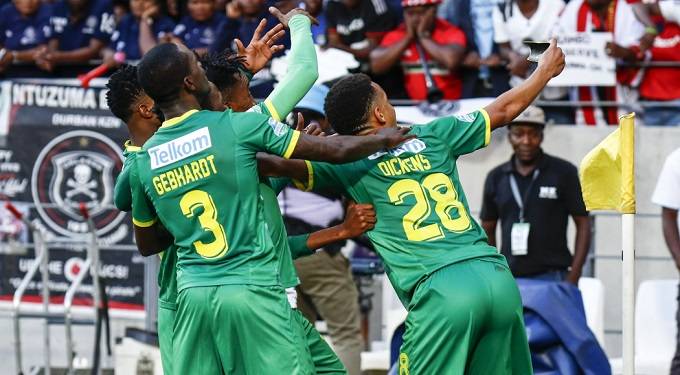 The win saw Bakgaga clinch the Telkom Knockout title and their maiden major cup in the club’s history.

The first chance of the game fell for Thembinkosi Lorch following a mistake by the Bakgaga defence in the sixth minute.

The Pirates forward was brilliantly denied by Baroka’s Zimbabwean goalkeeper, Elvis Chipezeze, who made a low save.

Pirates suffered a major blow when Marshall Munetsi was given a straight red card after making a dangerous tackle just before halftime.

Baroka then took advantage of their numerical superiority as they took the lead on the strike of halftime. Jemondre Dickens scored with a fine volley into the far corner to make it 1-0 to Baroka after a goalkeeping error from Pirates shot-stopper Siyabonga Mpontshane.

Baroka were leading 1-0 at the interval in Port Elizabeth.

The Soweto giants deservedly levelled matters from a well-taken free-kick 12 minutes into the second half. Justin Shonga’s free-kick hit the upright and Musa Nyatama reacted quickly to fire home from close range and make it 1-1, much to the delight of the Pirates fans.

Pirates continued to attack in the closing stages of the game, but Chipezeze made two great saves to deny Pule and Shonga.

Chipezeze’s late saves ensured that the game ended in a 1-1 draw in regulation time and extra-time followed.

Baroka were awarded a penalty in the first half of extra-time after Onkabetse Makgantai was fouled inside the box by Mpontshane.

Mduduzi Mdantsane then stepped up and the Baroka captain beat Mpontshane from the spot-kick to make it 2-1 to his side.

Pirates never lost hope as they pushed for the equalising goal and they managed to score in the second half of extra-time.

Lorch netted with a header to make it 2-2 after some great work by Shonga and the goal ensured that the game ended in a 2-2 draw and a penalty shootout followed.

Baroka emerged 3-2 winners on penalties with Pirates attackers Thabiso Kutumela, Lorch and Shonga failing to score from the spot-kick. — SuperSport

The King whose special place in the palace provokes debate

Are soccer agents to blame?