‘Fire me if I was wrong to meet Mnangagwa’ 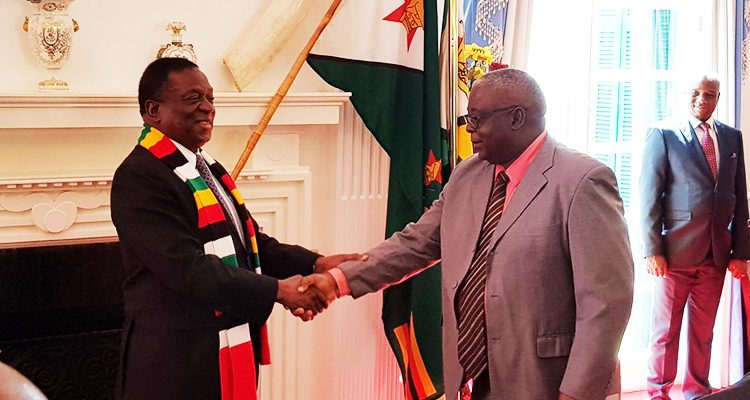 He has also challenged those who feel he was wrong to fire him from the party.

Mudzuri was the only MDC official presented to Mnangagwa at State House by National Assembly Speaker Advocate Jacob Mudenda and Senate president Mabel Chinomona during an introduction of 9th Parliament presiding officers to the head of State.

Furious fellow MDC MPs, among them Charlton Hwende and Murisi Zwizwai angrily confronted Mudzuri at a local hotel in the capital over the issue.

Former Zanu PF minister denies being raped by Mnangagwa as a…

Reacting to the confrontation, Mudzuri told the Daily News he felt he had been treated disrespectfully.

“I am an old man who has been in this party for a very long time at the top leadership but to be treated like this and in public is just not on because it will paint a picture of a party with disunity with leaders fighting each other when it is not the case,” Mudzuri said.

Pressed to say if he believes he is being persecuted because he harbours ambitions to challenge party leader Nelson Chamisa at the MDC congress set for next year, Mudzuri insisted that it was sheer lack of respect by some leaders.

“Congress is coming and everyone who has ambitions is allowed to contest for anything but that cannot be reason for disunity because we need each other.

“As a leader in the party, I would not be happy to have the party divided by congress; we need to unite now more than any time to make sure that we are able to replace Zanu PF as a ruling party.

“I really do not understand what is happening in the party but personally I would not want to respond to the question of whether or not I want to contest for presidency as it will cause unnecessary problems. I want unity, respect and maturity,” he said.

In a video that has since gone viral on social media, Hwende and Zwizwai hectored Mudzuri, demanding to know why he was the only MDC legislator to pay a courtesy call on Mnangagwa.

A defiant Mudzuri has, however, dismissed his rivals as “petty politicians”.

“It is with sadness and unfortunate circumstances that my fellow junior parliamentarians would want to play petty politics on something that is part of my terms of reference as a party deployed member.

“My confusion to all this stems from the fact that, if what I did was ‘illegal’ to my fellow parliamentarians, then I want to understand what we are still doing in parliament as a party and wasting taxpayer’s money.

“I went to State House not to appease President Mnangagwa, but to respect the office of Parliament,” said the former Harare mayor.

“If am wrong and they are right, I would be proud to be fired from the party because I represented the party in Parliament business.

“It’s sad that my very colleagues were fully engaged in Parliament business at HICC on post budget consultations, a budget presentation that saw MPs under attack from police. What hypocrisy!

“I believe that I did not go to State House to betray anyone; nor did I do it nicodemously, but in the full knowledge of my colleagues who then faked theatrical accusations.

“The nation is faced with acute economic challenges under a failed leadership of Zanu PF. That must be our focus, but to abuse my person this way is very unfortunate,” Mudzuri said. DailyNews