England staged a superb late comeback to beat Croatia at Wembley to reach the finals of the inaugural Uefa Nations League. 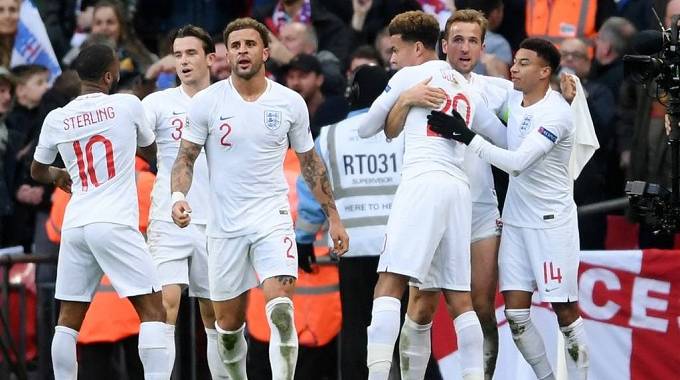 Croatia, England’s World Cup semi-final conquerors in Moscow in July, looked set to inflict their curse once more and relegate Gareth Southgate’s side from the elite group when Andrej Kramaric’s twisting finish put them ahead via a deflection off Eric Dier after 57 minutes.

England needed two goals to win the group and reach the semi-final and final stages in Portugal next June and at least inflict a small measure of revenge on Croatia for that World Cup disappointment.

And they responded brilliantly to get the win their performance deserved and secure qualification for the next stage of the tournament as substitute Jesse Lingard scored from almost on the line with 12 minutes left.

England manager Gareth Southgate will have feared an old flaw was returning to haunt his side when Kramaric put Croatia ahead just before the hour after seemingly taking an age to twist and turn before beating Jordan Pickford.

It was cruel on England and punishment for failing, as they did in Moscow, to make the most of vast first-half superiority as they created a series of chances but contrived to miss them, with Kane and Raheem Sterling the chief culprits.

England could have been forgiven for believing the fates were against them as they trailed to their League A Group Four opponents, who have become something of a bogey side over the years.

Instead, they responded with courage and character as the clock ticked down to rescue glory and a place in Portugal from the prospect of relegation into the lower reaches of the Uefa Nations League.

The victory also guarantees England a place in the Euro 2020 play-offs, a fallback in the event they fail to qualify for that tournament through the traditional route.

Southgate can take his share of the credit for two attacking substitutions, sending on Lingard and Jadon Sancho with England’s backs against the wall, the reward coming in the shape of that decisive late rally.

It hardly counts as retribution for the disappointment of the World Cup semi-final but it was a demonstration that this England side is developing under Southgate, this victory acting as a measure of their progress.

The obvious joy of England’s players and supporters after that dramatic finale was another indicator that the Uefa Nations League, mocked and maligned at its inception, is capturing the public’s imagination.

It is not yet close to being ready to be spoken about in the same breath as the major tournaments such as the World Cup and the Euros — but England’s adventure so far has produced hard evidence that the idea behind its creation, to add an extra edge beyond traditional friendlies, has been a success. BBCSport

‘Lunga could return against Chiefs’