A headman in Chiredzi slapped Prosper Manyengeni with a fine of two goats after starting a veld fire that blazed through 20 hectares of parched grasslands, decimating pastures and sparse native woodlands, as the so-called fire season hots up. 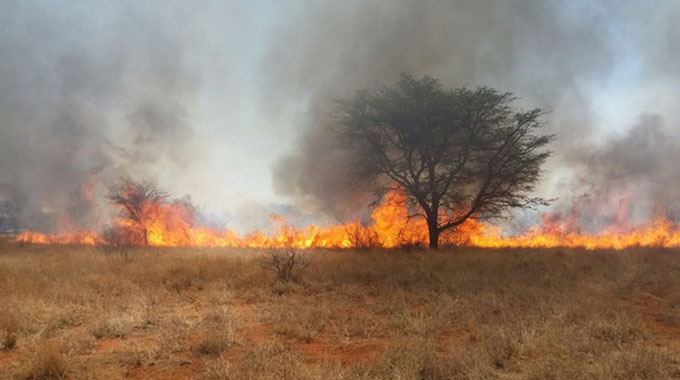 A satellite fire tracking system by local non-governmental Fire Fight Trust picked up the fire on October 4, and the Environmental Management Agency’s foot soldiers, which are spread throughout Zimbabwe to detect, educate and prevent environmental crimes, investigated the incident.

“Further investigations have revealed that the fires were experienced in ward 1 Chiredzi,” Mapako said by text message. Mapako added that the satellite detections appeared somewhat less exaggerated compared with on-site assessments — the fire burned over a larger area.

“First site, incident area was burnt 5km from Dikitiki Primary School, it is in the communal area and the suspect Prosper Manyengeni who was opening a new field was identified. He was charged 2 goats by headman Munda while area destroyed was around 15 to 20ha,” said Mapako.

He continued: “The second incident’s hactarage could not be established, but there were signs of severe damage to the grazing area. No household, property or livestock was burnt. Villagers accused one Silas Mavanhu Mutombeni who is a known charcoal dealer in the area.

“The third incident includes a child of Nestai Makuni who played with fire resulting in the burning of the grazing space.”

Zimbabwe is considered a net carbon sink, thanks to its sprawling indigenous and plantation forests – a major purifier of climate-damaging gases such as carbon dioxide — which cover about 45 percent of the total land area, according to Government data. On emissions, the country barely registers on the radar, accounting for just 0,05 percent of the global total.

But a lack of sufficient preparations and skill to prevent small fires from becoming big fires that decimate native woodlands has become a major concern.

Wildfires are a major driver of change in land use patterns, altering the forest cover, plant and animal composition, as well as weaken the country’s capabilities to function effectively as a storer of carbon.

Two goats fine – and lots of awareness – but fire burns.

In Chiredzi, the two goats fine is almost laughable, Many would think it was disproportionate to the scale of the crime committed. But this is a village court — goats and chickens, key treasure for a rural household, will do just fine.

And every so often such fires are started by innocent village farmers — just ignorant — who have no intention at all to burn down the entire village! Headman Munda this time opted for two he-goats, for seemingly naive Manyenyeni.

But ignorance is no defence. A lot more fires are started by careless smokers and “thugs” on the mice hunt. Perhaps villagers aren’t getting enough information on the dangers of starting fires in windy, dry conditions.

“My big question is (on) the effectiveness of current fire awareness campaigns,” quipped Lawrence Masungunye, in a discussion of the fires that continue to burn throughout Zimbabwe, regardless of increased efforts to prevent them.

The general consensus is that rural communities now know almost enough about the risk of open fires, since this is where most of the fires linked to land clearing occur.

A lot of educational and awareness campaigns have been going on in those areas for a long time. But something is still missing.

“Our weaknesses have to do with response mechanism, who should stop a fire and with what?” said Mwedzi.

Suggestions fly in, encouraging to strengthen the capacity of rural farmers (not clear how) to respond to fires, more awareness and so forth.

In the Save Conservancy in Chiredzi, EMA’s Mapako spoke of how a ravaging fire ashed its way through 1 000 hectares of grasslands and forests, pillaging a series of 50ha plots in the vast unnamed farm.

About 1,5 million hectares of land — much of it grasslands, plantation forests and natural woodlands — go up in flames each year in Zimbabwe, despite its small geographical size.

According EMA, the figures have soared from just 400 000ha at the end of 2001, when Government speeded up land reforms, to resettle over 300 000 native farmers on virgin land.

Farmers have gone on to cut down trees, clearing the land for agriculture. Fire is commonly used in this process also, even outside the so-called three-month to October “fire season”, the period in which anyone is allowed to start a fire outside their homes legally.

But fire is now becoming a key part of the climate problem in Zimbabwe. A Government plan drawn up under the Paris climate accord says the country aims to sequestrate unquantified amounts of carbon dioxide through its forests.

The plan revolves around Zimbabwe getting paid for keeping its trees standing — or not destroyed by fire — under a UN forestry programme called REDD+. The plan is already underway in the country’s west, under the Hwange-Sanyati Biological Corridor Project, funded by the World Bank to the tune of $29 million. Anymore burning will not be tolerated. The Herald