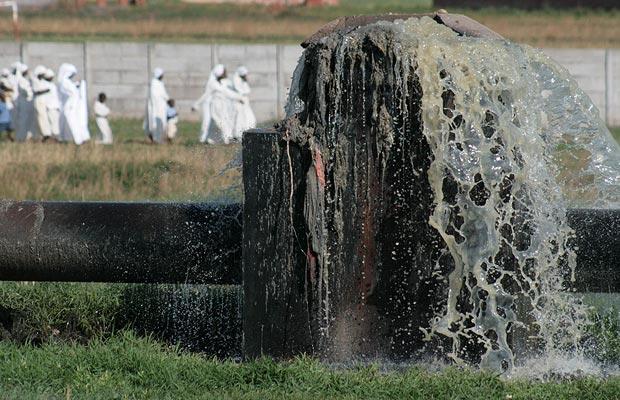 An average of 21 tonnes of sand is being removed daily from Firle Sewage Treatment Plant in Harare, a situation that has greatly contributed to increased blockages and contamination of water sources, Harare City Council acting director for water Engineer Mabhena Moyo has said.

Speaking at a cholera indaba organised by Zimbabwe Broadcasting Holdings’ Classic 263 in partnership with the Zimbabwe Institute of Engineers in Harare yesterday, Eng Moyo said the population has outgrown existing sewer and water infrastructure.

He said ordinarily, no foreign object other than sewage is expected in the sewerage, but objects such as sand, spoons and towels were finding their way into the system.

“The current cholera outbreak was not as a result of contaminated Harare tap water, no. Even to this day we have continued carrying out quality tests and the water is meeting the required standards. However, the outbreak was caused by contamination of underground water by sewage following a blockage.

“On a daily basis we are removing an average of seven truckloads of sand. We suspect that some residents are using sand to clean kitchen utensils, which then finds its way into the sewer system, resulting in increased blockages.”

He said because of increased population in Harare, the treatment plants were also overloaded resulting in a deficit of 200 mega litres of unprocessed sewage in the system per day.

“Our treatment plants are currently overloaded and we need to build additional plants to ease the pressure as well as closing sewerage ponds in Donnybrook and Marlborough because they also pose health risks to residents,” he said.

Engineer Beverly Nyakutsikwa, who is also a member of ZIE, said the link between water and sanitation infrastructure and water borne diseases could not be over emphasised. She said infrastructural development must move at the same pace with population growth to avoid over-stretching existing infrastructure. The Herald.