There is something about Rufaro Stadium under flood lights. Some magical moments have been produced in this Theatre of Dreams. Memorable matches, memorable performances! Like the one when a young Gift “Magyver” Mudangwe ran rings around the Dynamos defenders leaving veteran journalist Jahoor Omar waxing lyrical about his performance.

He wrote, “The name Gift Mudangwe is not a household name in the football fraternity but ask the Dynamos fans who watched the match last night, they will now say they know him.” What a match it was but before Mudangwe, there was Takaiteyi Muskwe often misspelt as Muswe another teenage prodigy who came, conquered and left a permanent imprint on our collective memories.

Allan Hlatshwayo the great football writer was there to witness this moment of magic. He wrote; ”Unfortunately there was a small crowd to watch a new star born last night. His name is Takaiteyi Muskwe, a Jack who rose to become a king.

Lot Chitakasha: Lessons from AFCON…. my thoughts and…

Remembering Rodrick Muganhiri…. genius on and off the…

“The rare opportunity in the team for the young man will forever give coach Obediah Sarupinda a headache in his future selections. The dribbling wizard kept Karls United defenders, Ernest Mutano, Reg Payne, Gift Makoni and Joey Antipas busy the whole night.”

What an endorsement it was from the legendary journalist. The man often referred to as the Teacher had been enchanted. He had every reason to. But who is Takaiteyi Muskwe the prodigy who grabbed the headlines in 1982? Taka was born in Murehwa but spent his childhood in Mufakose, that ghetto which was also the home of some of Zimbabwe’s best footballers.

Joel Shambo, Archford Chimutanda, Stanley Ndunduma, Memory Mucherahowa, Stanley Chirambadare, it is the A-List of Zimbabwe football. They do not make them like this anymore. Takaiteyi took pride of place among these greats. He did his primary school at Tendayi and Mukurumbira schools before proceeding to Mufakose1 High school.

It is during these formative years that he began his football career. “I started playing first team football when I was in Grade 4 at Mukurumbira Primary, at Mufakose High, I was in the first team while in Form 1. My teachers had so much faith in my abilities…” said Taka.

Mufakose is also the home of money games, a ghetto tradition which often takes place on the dusty pitches dotted around the country. In fact, it was during one such game that Taka had his breakthrough. One fan organised a challenge match against super league players such as Joel Shambo and Stanley Ndunduma among others who were on the off season.

“I played a blinder and I gave the defenders a torrid time, we won the match by four goals to two.” A pleasant surprise awaited Taka the following Monday. A high powered delegation led by the Caps United head coach Obediah “ Wasu” Sarupinda , Captain Joel Shambo, Stanford Mtizwa and Stanley Ndunduma descended on his humble residence. They wanted Taka to sign for Caps United.

His parents were a bit hesitant but after some sweet talk from Wasu, the Samanyika had a way with words, they agreed. This began the journey, the journey that culminated in that beautiful night at Rufaro Stadium. At Caps United, he started off in the reserves with other good players like Witmore Sarupinda, Todd Chitimbe, Weston Mvembe and Francis Nechironga.

Caps United had some quality players during this era and Taka’s position on the right wing was nailed and sealed by Stanley Ndunduma. He had to be very patient. Then the injuries struck. Stanley Ndunduma was out. His supporting act Charlie Jones was out. Crisis? Rotten luck for the Green Machine at a time when they were facing top of the league Karls United?

Far from it, it was actually a blessing in disguise. Taka was thrown into the deep end. His time had finally come and boy, did he grab it with both hands! “Joel Shambo came to me and said , mun’ina , play your usual game, the way you play at training, just play that way, do not change..” said Taka.

With the Captain’s words of encouragement, Taka delivered a performance which had Allan Hlatshwayo eulogising, he had arrived! After that night, Taka became a permanent feature of the first team. Ndunduma was still an impediment but Taka learnt a lot from him. 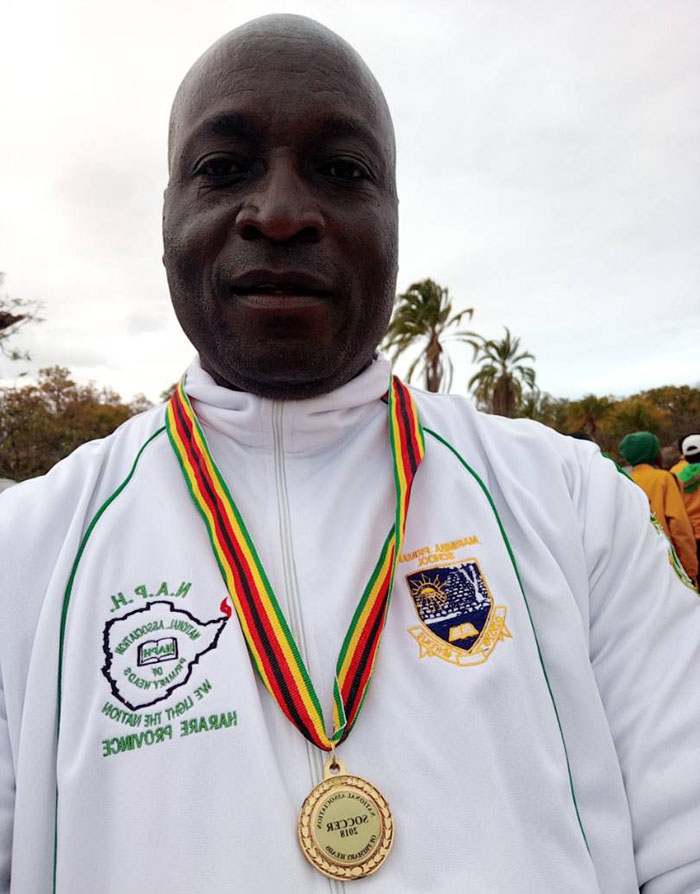 Cameo roles in the team were guaranteed. Caps United moved quickly to secure their future star by giving him a job. “I had passed my O levels and they gave me a job at Caps Holdings as a casual worker. The plan was that I would join the apprenticeship programme the following year as a trainee pharmacist but it was not to be. The Human Resource manager changed and the new one shifted the goal posts, he enrolled a relative and asked me to wait another year. I was devastated.”

Alive to the fact that football is a short career, Taka’s brother who was a trained teacher advised him to train as a teacher. He secured a place at Mutare Teachers College. “I could have gone to Seke Teachers College but I wanted to be as far away as possible from Harare, I was still bitter about my treatment by Caps United…”

While training, Takaiteyi played for Manica United getting some rave reviews from the press in Mutare. He finished his training and moved to Rusape to start his teaching career in 1987. In Rusape, he played for GMB Tigers and UBS again bringing the magic of his dribbling skills to those lucky enough to have watched him.

Takaiteyi who is now a Headmaster at Marimba Council Primary School has been an Educationist since 1987. He has taught at St. Peters Tokoyo in Rusape, became substantive deputy head at Nyandoro in Highfields, Kubatana in Epworth and Makundano Primary school in Mufakose. What a career he has had, representing the Nation on two fronts.

Muskwe, who also attained a level 2 coaching certificate under the instructions of Jimmy Malomo, and is also a Class one referee, is the Head in charge of Sports in the National Association of Primary School Heads. He has some brilliant ideas about football development.

“Our football leadership is currently too political and as such political decisions are made in the name of football. We have former players who are knowledgeable, they should lead the game. As teachers, we have also killed football in schools. The idea of playing Galas instead of a league format in schools which we arrived at to cut on costs is detrimental. We have reduced football to a single day event, we are starving children of action.”

He adds, “We also need to address the curse of age cheating. Football in schools should be about development and teachers should abandon the win at all cost modus operandi. Academies are doing a good job, but the role of schools should not be neglected in football development.

Teachers understand children, they have the pedagogy, they have the psychology, they understand the sociology of child development, their role must be more prominent. They cannot surrender this role to Academies..” He indeed fights in the corner of all educationists. I have said it and I will say it again.

Zimbabwe football is rich with former players who are able to lead the sport but they are in the shadows. Takaiteyi Muskwe, the veteran educationist is one of them. Taka has four children, Tafadzwa, Tapuwa, Tawanda and Takaiteyi junior. He has been blessed with four grand children but separated with the mother of his children in 1999.

He is currently in a relationship with Future Mujee and plans to remarry soon. Dear reader, this is the brief story of Takaiteyi Muskwe, the teenage prodigy who had Allen Hlatshwayo waxing lyrical 32 years ago. It was a night when, “ the jack became the king..” as the veteran writer aptly put it.