Bobi Wine is learning that shifting from performing protest songs to protesting from the benches of Uganda’s parliament will require a different kind of resilience.

Wine, real name Robert Kyagulanyi Ssentamu, appeared in a military court on Thursday showing signs of physical torture, with reports that he was unable to walk, talk or even register the charges read out to him. He was charged with the illegal possession of a firearm and ammunition after he was involved in clashes with president Yoweri Museveni’s supporters.

Wine was in the northwest of the country in the Arua municipality on Monday Aug. 13 to show support for a new candidate in a local by-election.

Museveni was also there to throw his weight behind the ruling party’s candidate. Their supporters clashed as protestors pelted Museveni’s car with stones, breaking the rear windscreen, Uganda’s military said in a statement.

Tweeting a picture of a bloody body slumped over in a car seat, Wine said that police shot and killed his driver, accusing the police of mistaking the driver for Wine. 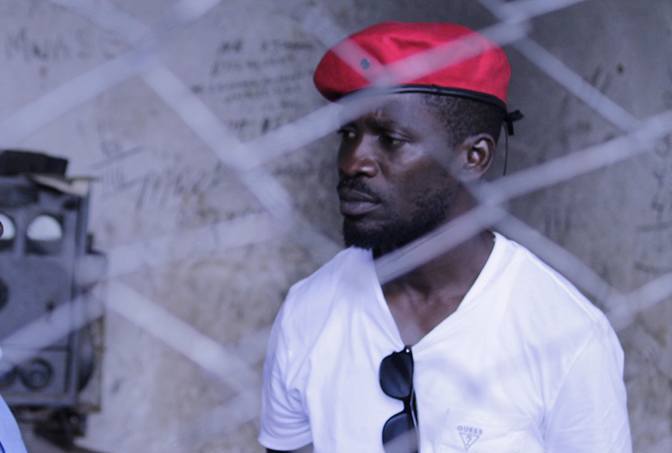 Police searched Wine’s hotel room, arresting him along with other opposition leaders. A total of 34 people were arrested, but the others were all charged in a civilian court.

Wine has experience with Museveni’s 32-year regime. Uganda’s communications commission banned his hit 2017 song Freedom, making it illegal to play on both television and radio. In the song, he picked up many of the protest themes that first made him popular among Uganda’s youth.

We all know you fought a bush war/
But imagine a child who was unborn when you came/
Has also long become a parent.

Wine already formed his own caricature state “ghetto republic” over a decade ago. It was headquartered in one of Kampala’s largest slums, Kamwokya, and became a place where he and other musicians evolved from catchy crowd pleasers to politically charged songs.

On a wave of thousands of fans, Wine styled himself as the “ghetto president,” and contested a June 2017 by-election on a ticket that challenged the incumbent’s greed. Criticisms of alleged drug abuse and an unsuitable lifestyle for conservative Uganda seem to have done little to slow his rise. Now in parliament he’s stuck to his mandate, recently leading criticism of Uganda’s new social media tax.

At 36, Wine appeals to a youthful electorate excluded by the polices of their 74-year-old president. With Uganda’s median age at 15 years, Wine could emerge as the strongest opponent to Museveni in the 2021 election. He won his seat running against both the ruling and opposition parties by positioning himself as the voice of the youth, scoring a landslide victory.

Mnangagwa splashes over US$1 million on new limo