NAMIBIA handed Zimbabwe their third consecutive defeat in this year’s Rugby Africa Gold Cup, a loss which left the Sables facing the prospect of being relegated from the continent’s elite group. 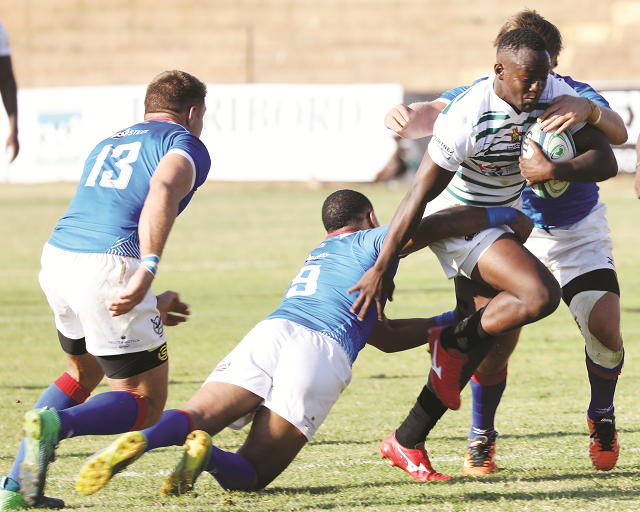 A spirited performance by the Peter de Villiers-coached Sables who became the only team to score four tries against Namibia in this year’s Gold Cup was not good enough to lead them to victory at Hartsfield Rugby Ground yesterday.

Instead, the Sables must now overcome Uganda in Kampala on 18 August to remain in the Gold Cup, which is a grouping for the top rugby playing countries in Africa outside South Africa. The Sables never recovered from conceding an early try and trailed 27-7 heading into the break.

Crucially though, the Sables picked up a bonus point for scoring four tries and victory against Uganda should be enough to ensure they remain in the Gold Cup with the worst being relegation to the Silver Cup.

De Villiers acknowledged that the next encounter against Uganda, the last match for Zimbabwe this year is the most significant one as that will determine if the Sables survive the chop from the Gold Cup.

“The next game is the most important game, today was about small victories when we couldn’t make it anymore and the small victory was to get one bonus point off this game as we planned it and we got it,’’ De Villiers said.

He attributed the loss to the slow start by the Sables, which saw them play catch up for most parts of the game and experience also played a huge part.

He attributed the loss to the slow start by the Sables, which saw them play catch up for most parts of the game and experience also played a huge part.

“We showed some signs of brilliance, there are positives out of this game, it’s not the result that we wanted but we managed to get a bonus point which could really help us to stay in the Gold Cup,’’ Mutamangira said.

The captain is convinced that with the youngsters in the team, Sables will be hard to beat in the coming years.

“Obviously we want to win but scoring 28 points against Namibia really shows that this team is good enough to beat any team in the Gold Cup. We have youngsters in the team, this team has got huge potential that in the next year or two it will be the team to beat,’’ he said.

Namibia were the first to score, right wing Lesley Klim going over after a successful lineout in his team’s half, the Zimbabwean defence not doing enough to prevent the try, flyhalf Cliven Loubser with the successful conversion. Zimbabwe’s four tries were scored by wings, Tafadzwa Chitokwindo, Shayne Makombe, flank Connor Pritchard and prop Farai Mudariki. Brandon Mandivenga and Lenience Tambwera booted in two conversions each.

No self-isolation for Mnangagwa: Minister

Namibia’s first lady pledges to give her wealth to charity