A man who stabbed a hooker for demanding her money is lucky to be alive after a mob pummeled him. Happening live in front of the B-Metro lenses, the man, Itai, stabbed a woman identified as Sharon in full glee of the public that reacted angrily and beat him up. 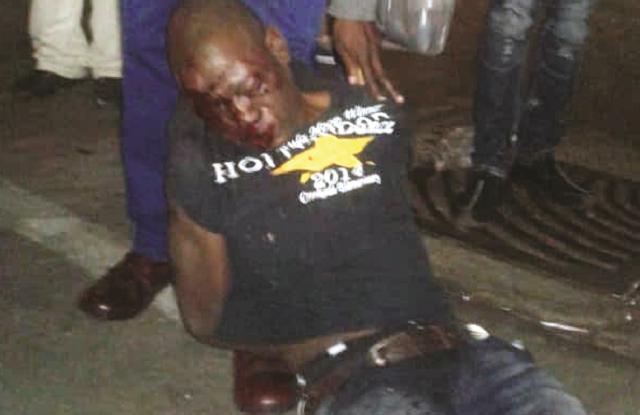 He was saved by the police while Sharon lay on the ground in pain as others also came to her rescue.

Nothing much could make sense about a woman and a man who had earlier been intimate and were seen going to the nearest shops and suddenly a bloodied incident ensued.

After being helped to stability by onlookers, Sharon explained to B-Metro what happened.

“He hired me for a sex session, after we finished he asked me to accompany him to look for change (money) and when we got to the corner of 9th Avenue and Herbert Chitepo Street he changed the story saying he won’t pay because I was tasteless and my item was too watery,” said Sharon.

Sharon went on to explain how their sex act went like and the emotional abuse she endured.

“We had unprotected sex and he promised to pay me $25. He showed me the money he had, as a result I was convinced that he would pay more but he became angry when we got at the corner of 9th Avenue and Herbert Chitepo. He stabbed me at the same time calling me a desperate prostitute and warned that he would kill me,” she added.

While the reporter tried to make sense of what was happening, Itai shouted that he had paid for her services.

“I paid her but what angered me is that she invited her boyfriends to rob me so in self defence I had to hit her with fists and she lost consciousness in the process. I did not stab her,” said a bloodied Itai.

However, the mob did not buy his story.

“You are lying! You wanted to kill her and you did not want to pay for her sexual services,” shouted a man as he joined the mob in kicking him.

Itai bled profusely and had to thank the police who came to his rescue. Soon after that an ambulance came and the pair was taken to United Bulawayo Hospitals (UBH). B-Metro