There is a brewing fight on Twitter after Paul Kagame replied to a tweet from sensational Zimbabwean troll, “Matigary.”

The fight was caused by “New Zimbabwe”, which published a very misleading story where they claim Nelson Chamisa took credit for Rwanda’s economic “success” at a recent rally.

Matigary tweeted to President Paul Kagame asking him if Nelson Chamisa was his economic advisor since, as per the spurious “New Zimbabwe” article, Chamisa was taking credit for Rwanda’s economic success.

Paul Kagame replied saying he does not identify Nelson Chamisa, and that there has never been a meeting between the two. He went on to claim that Rwanda’s economic success started way before the formation of MDC in 1999. Rwanda’s foreign office even responded to the “New Zimbabwe” article, labeling Chamisa a liar among other insults.

I took my pen to write about this, as this is a very important development which I know Zanu-PF’s propaganda machine will jump on and use to their bolster their efforts to rig the Zimbabwean elections. They will paint Chamisa as a juvenile and a liar who is being exposed by presidents and governments across the globe including Kagame and Rwanda.

But before they do that, I write to expose why Paul Kagame, a dictator and master propagandist even cared to address this incident of utter yellow journalism.

The first anomaly in this story is Paul Kagame’s pettiness. Paul Kagame actually replies a tweet from a troll! To this day no one knows who “Matigary” is.

Some have speculated that “Matigary” is George Charamba. Whilst this might be an educated guess, no one has verified the true identity of this man. And a whole president goes on to reply to his tweet. If “Matigary” is indeed George Charamba, then we know this was a coordinated effort.

Let’s give Kagame the benefit of the doubt and say he responded to a tweet from a troll because it was based on a real news article from a newspaper.

So why did Paul Kagame jump to defend himself from this blatant piece of “fake news?”

Kagame comes across as a very defensive leader, always checking his Twitter feed to answer to trolls. He is very insecure at this time.

What urges Kagame to want to snatch credit for Rwanda’s economic prosperity from Chamisa? If indeed Rwanda is a success, and Kagame is the Godfather of Rwanda why is he jittery? The truth is that Rwanda is the 19th poorest country on earth with a per capita income of around $700.

Kagame is a well-known tyrant who silences all of his critics in Rwanda and abroad by means evil and crude. He has detained opposition leaders in Rwanda, won the last election with over 99 percent of the vote. A recent referendum amended the constitution of Rwanda to allow Kagame to rule until 2034. 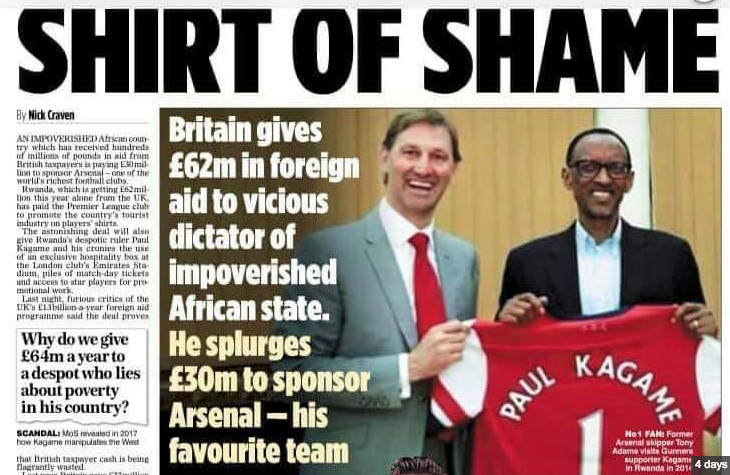 We know why Kagame would be combative at this time. He has been slapped by the British press this week for taking aid funding from Britain to sponsor Arsenal FC one of the world’s richest soccer clubs. Rwanda receives significant aid from Britain.

Part of the reason why Britain continues to lavish Rwanda with developmental aid is “white guilt” associated with the Rwandan genocide, where Western governments feel they did not do enough to avert the crisis that killed millions of people in Rwanda.

Kagame continues to blackmail the West for turning a blind eye on Rwanda during the genocide to amass a lot of western aid and general goodwill from Western capitals.

But things changed this week when the British press slammed him for taking 30 million pounds of the 68 million pounds he received from the British government to sponsor Arsenal FC as a sleeve sponsor for the 2018-19 Premier League season.

And he’s relieved all this pressure and stress on Nelson Chamisa. Interesting, isn’t it?

No matter how “The Herald” or any of Zimbabwe’s state newspapers will try to spin this against Chamisa, Paul Kagame is not one of the sources of the international legitimacy they are seeking. Wrong turn. He is a dictator with his own serious demons to fight, and nothing will change that.

For now, he thought if he distracts Rwandan news to a petty fight with Zimbabwe’s opposition leader, newspapers will turn away from the Arsenal saga. The only problem is that this tactic might not work this time. The British press is livid at Kagame.

There is already mounting pressure on Arsenal FC to reverse the deal with Kagame and give him back the funds that his impoverished country desperately needs.

Kagame is a dictator. The only surprise here could be why a democrat like Chamisa would find himself praising a monster with hands dripping of fresh blood. We expect better, Nelson.

Chamisa: ‘2022 is a year for citizen action.. we must deliver change’