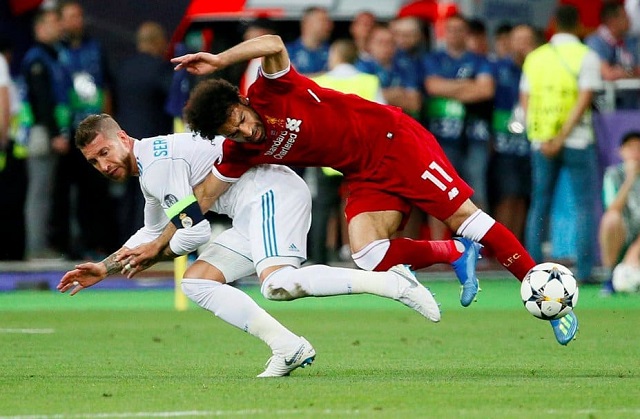 The seemingly crude tackle on the Egyptian in the first half resulted in the Liverpool star leaving the pitch in tears with a shoulder injury. There were also fears that he could miss the World Cup in Russia that starts next month.

A number of Liverpool fans and even some neutrals felt Ramos, a known hardman at the heart of the Real Madrid defence, had deliberately played the man and should have been punished with a sending off by Serbian referee Milorad Mazic.

However, Chawanda said he doubted Ramos deliberately injured Salah, arguing that the battle was on techniques and tactics.

He is one of the best players in the world: Nakamba heaps…

He said no one would be moaning had it been Ramos who had fallen and dislocated his shoulder.

“The much anticipated final has come to pass, packed with drama and incident. I will not talk about Karius’ costly blunders, or Bale’s (Gareth) victorious heroics, but the most debated tangle between Mo Salah and Ramos. The end result to the incident is regrettable in football, an injury to a player,” Chawanda wrote on his Facebook timeline.

“My opinion and observation brings me to this conclusion; it was a battle of techniques and tactics, the attackers and the defenders. Ramos had two options, go down and let him go ahead of him and gain advantage (poor defending), or let him go down with him. It was not a foul, as the referee clearly saw that Mo Salah was the instigator of the tangle. I doubt that Ramos wanted it to end in injury. No one would be moaning had it been the defender falling down and breaking a shoulder. In football, you win it, lose it or it kills you. Let’s now move to Russia for the 2018 World Cup.”

After the game Ramos sent a get well soon message to the Egyptian.

“Sometimes football shows you its good side and other times the bad,” Ramos tweeted. “Above all, we are fellow pros. Get well soon Salah. The future awaits you.”

Meanwhile, Salah himself has expressed confidence that he will make it to Russia despite earlier fears.

“It was a very tough night, but I’m a fighter. Despite the odds, I’m confident that I’ll be in Russia to make you all proud. Your love and support will give me the strength I need,” Salah wrote on Twitter. The Chronicle

He is one of the best players in the world: Nakamba heaps praise on Mo Salah