Prince Harry and Meghan Markle have been declared husband and wife, following a ceremony at Windsor Castle.

The couple exchanged vows and rings before the Queen and 600 guests at St George’s Chapel.

Wearing a dress by British designer Clare Waight Keller, Ms Markle was met by Prince Charles, who walked her down the aisle.

Following their marriage, the couple will be known as the Duke and Duchess of Sussex.

Harry and Meghan: No other option but to step back, says…

Meghan could face estranged father in court over leaked…

Among the guests were Oprah Winfrey, George and Amal Clooney, David and Victoria Beckham and Sir Elton John. 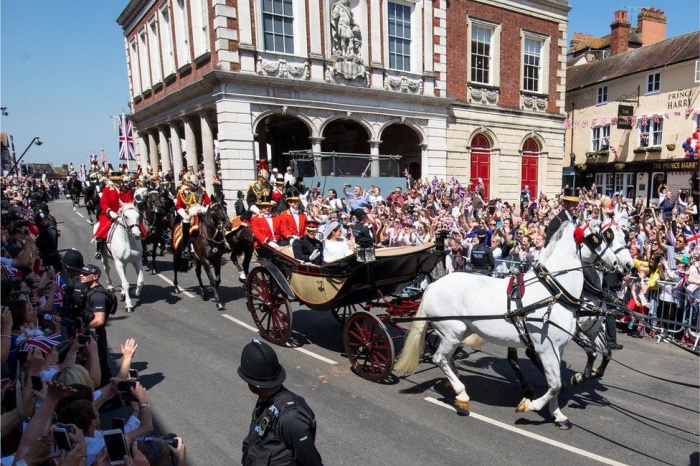 Ms Markle had 10 bridesmaids and pageboys – including Prince George and Princess Charlotte.

She wore Queen Mary’s diamond bandeau tiara, loaned to her by the Queen.

The look was completed with a veil measuring 5m and embroidered with the flowers of each country in the Commonwealth.

Prince Charles walked Ms Markle down the aisle, after her father, Thomas, was unable to attend for health reasons.

In her vows, Ms Markle did not promise to “obey” her husband, while the prince broke with royal tradition by choosing to wear a wedding ring.

Prince Harry’s ring is a platinum band with a textured finish and Ms Markle’s has been made from a piece of Welsh gold.

During the service, the couple pledged themselves to one another, saying: “For better, for worse, for richer, for poorer, in sickness and in health, to love and to cherish, till death us do part.”

The Most Rev Bishop Michael Curry, the 27th presiding bishop and primate of the Episcopal Church, from Chicago, gave an address, and the Rt Rev David Conner, Dean of Windsor, conducted the service.

Karen Gibson and The Kingdom Choir performed Ben E King’s soul classic Stand By Me during the service.

As the bride and groom signed the register, 19-year-old cellist Sheku Kanneh-Mason – who won the 2016 BBC’s Young Musician – performed three pieces – by Faure, Schubert and Maria Theresia von Paradis, with musicians from the BBC National Orchestra of Wales, the English Chamber Orchestra and the Philharmonia.

The gospel choir also performed Etta James’ uplifting version of Amen/This Little Light of Mine as the newlyweds left the chapel.

After the service, the duke and duchess travelled through Windsor along a route lined by up to 100,000 well-wishers.

Harry and Meghan: No other option but to step back, says duke

Duchess of Sussexduke of Sussex'