Fresh protests against Israel are expected in the Palestinian territories on Tuesday, a day after Israeli troops killed 58 people in the Gaza Strip. 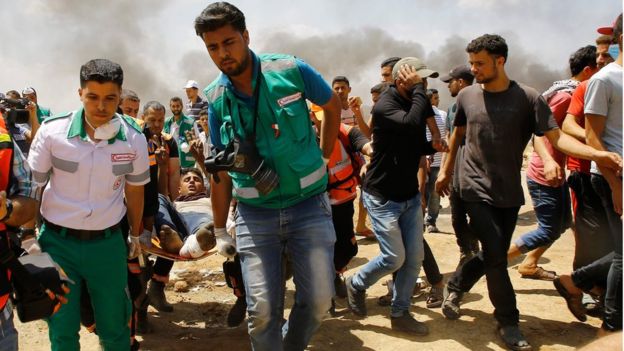 Monday was the deadliest day since a new wave of protests began at the Gaza border fence seven weeks ago.

Tuesday marks the 70th anniversary of what Palestinians call the Nakba – the mass displacement of Palestinians in the war following Israel’s creation.

Renewed tension is expected in Gaza, as the dead are buried in the enclave.

Monday’s violence came as the US inaugurated its first embassy in Jerusalem, a controversial move which has incensed Palestinians.

A ‘new day’ in Israel after Netanyahu unseated

They claim East Jerusalem as the capital of a future Palestinian state and see the US move as backing Israeli control over the whole of the city – which Israel regards as its indivisible capital.

Palestinian officials said that, as well as those killed, about 2,700 people were injured in Monday’s violence – which they condemned as a massacre. It was the deadliest day in Gaza since the 2014 war.

Israeli PM Benjamin Netanyahu said his military was acting in self-defence against Gaza’s Islamist rulers, Hamas, who he said wanted to destroy Israel.

What happened at the Gaza border?

Palestinians were demonstrating on Monday as they have been for six weeks as part of a protest, orchestrated by Hamas, called the “Great March of Return”.

However, Monday’s protests – and those planned for Tuesday – are the culmination as they mark the anniversary of Israel’s creation in 1948 and commemorate the hundreds of thousands of Palestinians who subsequently fled their homes or were displaced in the war that followed.

Israel said some 40,000 Palestinians had taken part in “violent riots” at 13 locations along Israel’s security fence along Gaza’s eastern border.

Mr Netanyahu defended his military, saying: “Every country has an obligation to defend its borders.

“The Hamas terrorist organisation declares its intention to destroy Israel and sends thousands to breach the border fence in order to achieve this goal. We will continue to act with determination to protect our sovereignty and our citizens.”

An Israel Defense Forces (IDF) spokesman said soldiers had fired on people carrying out “terrorist activity and not on demonstrators, who were dispersed by usual means such as tear gas and according to the rules of engagement”.

What has the international reaction been?

There has been fierce condemnation from some countries, but Israel’s key ally, the US, has backed it:

Was the violence linked to the opening of the embassy?

Not explicitly, though the protests and the opening of the US embassy were both timed to coincide with Israel’s 70th anniversary on Monday.

Hamas did not initiate the weekly protests but became the driving force. At the end of March, Hamas’ leader in Gaza, Yahya Sinwar, said the demonstrations were aimed at removing what he called the “transient border” with Israel.

Hamas calls for Israel’s destruction and is in a permanent state of conflict with the Jewish state.

Why is the embassy move so controversial?

The status of Jerusalem goes to the heart of the Israeli-Palestinian conflict.

Israeli sovereignty over Jerusalem is not recognised internationally and, according to the 1993 Israel-Palestinian peace accords, the final status of Jerusalem is meant to be discussed in the latter stages of peace talks.

Israel has occupied East Jerusalem since the 1967 Middle East war. It effectively annexed the sector, though this was not recognised by any countries until Mr Trump’s declaration in December 2017.

Since 1967, Israel has built a dozen settlements, home to about 200,000 Jews, in East Jerusalem. These are considered illegal under international law, although Israel disputes this.

The Palestinian president called the new embassy “a US settlement in East Jerusalem”.

Various countries once had embassies based in Jerusalem but many moved after Israel passed a law in 1980 formally making Jerusalem its capital. BBC News

A ‘new day’ in Israel after Netanyahu unseated

Israel’s Netanyahu returns to court as graft trial ramps up