President Cyril Ramaphosa and members of the governing party’s top six were locked in “urgent” meetings in Durban on Monday night, with African National Congress (ANC) regions that have been affected by the recent spate of political killings in KwaZulu-Natal. 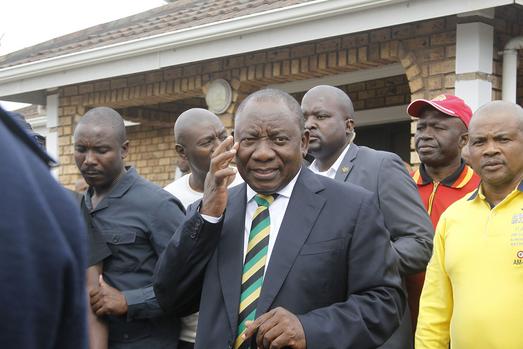 All three regions are yet to hold their regional conferences in preparation for the party’s provincial conference.

Detractors in the regions have said that the regional conferences and the provincial conference cannot take place while killings and manipulation of party processes that keep their faction out of decision-making processes continue.

Two ANC members and one Inkatha Freedom Party member were gunned down in separate incidents around the province last week, adding to the more than 80 politicians who have been murdered in KZN since 2011.

WATCH: Zuma speaks for the first time, pleads with people to…

The number of ANC members killed in incidents that are alleged to be politically motived now sits at around 30 since 2016.

Speaking to the media at the Coastland Hotel on Durban’s South Beach on Monday night, where Ramaphosa was meeting, Zizi Kodwa said the president had visited the family of former ANC councillor Musawnkosi Mchunu on Monday morning. Kodwa is the ANC’s former national spokesperson and now heads the office of the presidency.

Mchunu was shot outside his home in KwaPata, Pietermaritzburg, on Friday night. Ramaphosa told the crowd that had gathered on Monday morning that Mchunu was the fourteenth ANC supporter to be killed in the Moses Mabhida Region.

In a separate incident on Friday night, IFP PR councillor and Zululand District chairman Samkelo Dlamini was gunned down in Ulundi.

Earlier in the week, Sifiso Cele, an ANC Oshabeni branch treasurer at Ray Nkonyeni Municipality from the party’s Lower South Coast region, was also gunned down at his Margate home.

Kodwa said Monday night’s meeting centred on how to resolve the killings.

“This is not so much about law enforcement, the people who are being killed are ANC members who are on their way to ANC meetings or are councillors of the ANC in what appears to be an orchestrated elimination of ANC leaders,” he said.

The attacks were orchestrated to destabilise the party in KwaZulu-Natal, he said.

“The effort of the leadership here, that they have convened this urgent meeting of all structures in KwaZulu-Natal, is to find a solution. Politically, how do we deal with this issue, which poses a serious threat to the unity of the ANC?” he said.

Kodwa said it was too early to speculate that the killings were linked to regional conferences. He said the problem was complex and the lack of arrests and convictions of perpetrators added to the complexity.

“It is early days to link any killing to a conference,” he said.

“We want to see people being convicted and sent to jail.”

The Moerane Commission of inquiry was established in late 2016 by KZN premier Willies Mchunu to investigate political violence in the province. It finished its yearlong probe in March and its final report is awaited. IOL

Ramaphosa says no one can be forced to be vaccinated

Ramaphosa admits rampant state graft while he was VP