At least 24 people are reported to have been killed in suicide bomb blasts in the north-east Nigerian town of Mubi. 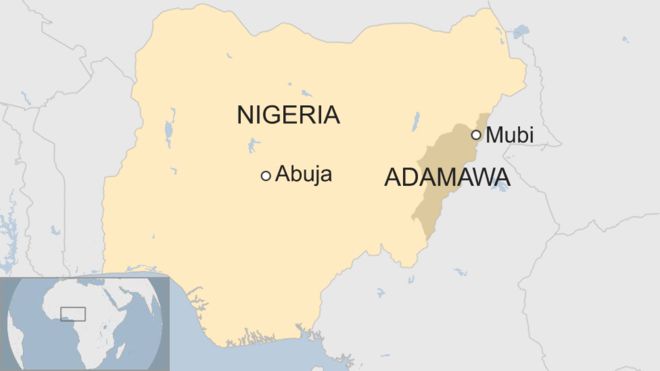 The explosions happened in and around a mosque as Muslims were preparing for afternoon prayers.

No-one has yet said they were behind the bombings, but the Islamist militant group Boko Haram has launched previous attacks in Mubi.

Boko Haram has waged a campaign of violence to try to create an Islamic state in northern Nigeria since 2009.

The violence has killed about 20,000 people and displaced more than two million.

Cameroonian soldiers go on trial over shooting of women and…

State police commissioner Abdullahi Yerima said the first blast took place at the mosque at about 13:00 (12:00 GMT) and a second bomber detonated a device nearby as worshippers fled.

Witness Abdullahi Labaran said the first bomber had mingled with worshippers and detonated his explosives shortly before prayers began.

He said people in the mosque then fled towards a market where the second bomber struck.

Many other people were injured and hospital sources said the death toll could rise.

Mubi has suffered regular attacks by Boko Haram. Last November more than 50 people were killed when suspected militants detonated a suicide bomb inside a mosque in the same town.

The group is known to target mosques whose preachers disagree with its views. BBC News