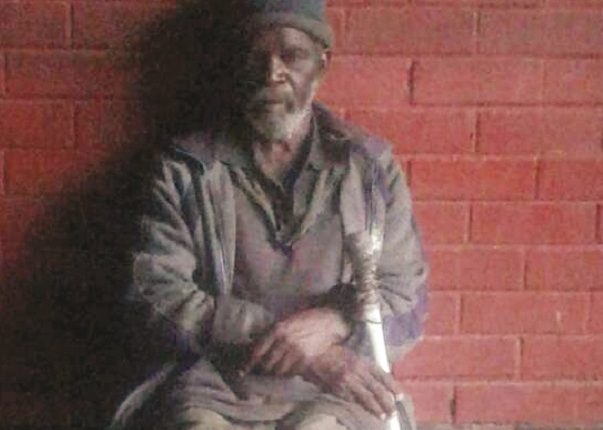 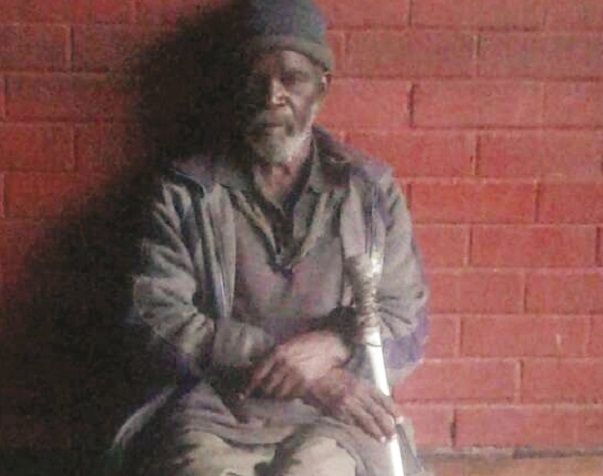 At first I had a feeling of hesitance but after some careful thought I had to make my way to Madlodlo Beer Garden in Makokoba, Bulawayo where I was told this former football great spends most of his time selling old newspapers.

We found him there sitting just by the gate selling old newspapers. The man who had accompanied me introduced me to the frail looking and energy sapped Nicholas Sibanda.

He welcomed us well. Sibanda was dressed in an old jacket and a shirt that looked heavy with dirt.

The not-so-good attire reflected the dire situation that the former Matabeleland Highlanders player battles with on a daily basis. His glamorous life has turned into a sorry sight as he survives on selling old newspapers. He says on a good day he raises about $3.

“I sell an old copy of newspaper for 10 cents and when my customers get paid I can raise about $3 which is a lot of money for me. With $3, I can buy my relish and opaque beer,” he says while scratching his swollen legs.

Due to swollen legs he has difficulty walking, sadly he has no money for medication.

“I have no money to consult a doctor. I was advised to seek help from social welfare but I could not get any assistance,” he says.

He says he now lives in fear as his siblings died in a strange way and believes witchcraft is at play.

“We were nine children in our family — four girls and five boys. Seven of them died in mysterious ways. After their death we consulted a sangoma who told us (family) that we were bewitched. I now live in fear as I do not know when death will strike me,” he reveals.

He says after that he made a vow that he will never set his foot at his rural home in Nkayi.

“It’s not like I have turned my back on my family or ancestors but I arrived at this decision so as to save my life. And even my surviving sister also made such a strong vow that even when traditional rites are done she will never attend,” he said.

He took Sunday Life Sport to his home nearby where he shares a squalid room with three other room mates. He opens up about his place of dwelling.

“I used to stay at Burombo Flats and then I came here after I was chucked out as they wanted married people. I have been living here for more than 20 years,” he shares.

Sibanda is appealing for help of any kind.

“I am kindly asking for clothes and food and a proper place to stay because here it’s not all that habitable,” he says.

Sibanda is a widower and he reveals that his wife passed on in 1979. He says they were blessed with four children but one passed on.

“One of my sons is based in South Africa while two are living here in Zimbabwe. I hope one day they will remember me and start to help me,” he says.

After much attention on his personal life, we turned focus to football. He says he was born and raised in Nkayi inMatabeleland North province.

He started his football career at a social club — Imbizo in Nkayi and was a utility player. In 1959 he came to Bulawayo and joined Matabeleland Highlanders.

“I remember that I played alongside Tommy Masuku and Mfakazi Moyo and these two were the pillar of the club as they were the shoulders to lean on for new players and they were also a source inspiration,” he says.

Sibanda has wealthy knowledge about Matabeleland Highlanders, which was later named Highlanders.

“The first split of the club was back in 1963 which nearly ended the club’s existence. Thanks to the arrival of legendary left back Edward Dzowa and Paul Tsumbe and a number of other players they made sure the club survived,” he reveals.

This was at a time semi-professional football and a multi-racial league was being introduced and forming the Big Three meant resources could be channelled to one club. The project however, did not last long. As if that split was not enough another problem emerged.

“At first they did not want us to retain our franchise in Bafa because they argued that with the formation of Big Three to play in the national league, there would be no Matabeleland Highlanders.

“People wanted to turn professional but there were some sceptical people at Highlanders who did not want to see the franchise fold. There is a guy like Falala who worked for Bulawayo City Council who fought hard for Bosso to retain its name and franchise. Falala helped us get a uniform and Dzowa was instrumental too in recruiting players,” he shares.

As the Big Three project did not last long, Cobras was formed.

After that Mashonaland United later to be Zimbabwe Saints, reverted to its original name and was to later to change to City Pirates. He cherishes the moment when they won the national league.

“I was a great moment when we won the national league and Chibuku Trophy,” he says.

He spoke glowingly of the ever colourful Silas Ndlovu philosophy at Highlanders when he was in charge of the club.

“That man had football brains. He brought new training methods and sound leadership that brought results. Under his astute

leadership Highlanders won its first major Cup -Chibuku Trophy in 1973 and since then Highlanders’ brand has grown as ithas attracted a huge support base,” he says.

“He believed in budding talent and inculcated the clubs’ ideology and culture to the youngsters,” he says.

The most difficult player he faced was Hwange’s legend Mwape Sakala.

He left Matabeleland Highlanders and joined Pumula City Crackers and spent four years with the side. He then joined a Division One side Valencia. But due to lack of sponsorship the outfit folded and this forced him to pack his backs to join Stud FC.

His worst match was when he handled a ball in the eighteen area yard.

“It was a hellish moment for me after I committed a mistake that resulted in a goal against us and I was scolded for that,” he recalls.

At the time age was taking its toll, as a result he called it quits in 1970 at the age of 32. The Sunday News