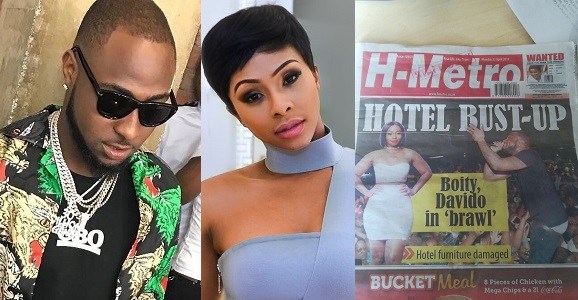 There is something about parties hosted by Harare socialite and businessman Genius ‘Ginimbi’ Kadungure. They always end with a lot of drama.

Usually, Ginimbi’s parties – mostly birthday celebrations – hog the limelight because of some female attendees who will be skimpily dressed and behaving inappropriately.

This time around at the latest Ginimbi fete – the Davido All White 30 Billion concert in Harare – it was less of that, but more of sexual advances gone wrong and fights, mostly over men or over celebrities’ belongings.

At this shindig, Ginimbi had invited South African Television personality, Boity Thulo, to bring glamour to the event that was headlined by Nigeria’s Davido who had let Zimbabwean fans down twice.

Ginimbi, a close associate of Davido, was determined to bring smiles on the faces of Zimbabweans and went all out to ensure Davido would finally come to Zimbabwe. Likely this is why he invited Boity (eye candy).

Everything you need to know about Davido and his 30 Billion…

Davido receives millions in one hour, after asking fans for…

Mzansi celebs rally behind Boity after savage assault by…

Interestingly, when it was announced that she had been included on the lineup, some like comedian Carl Joshua jokingly hinted that this was a move to lure Davido to join in on the party.

And true to Joshua’s word, it seemed Boity captivated him as it is reported that he had a nasty confrontation with her at the Meikles Hotel where they were both booked, moments after the Ginimbi organised concert had ended.

According to our sister newspaper H-Metro, in the early hours of Sunday morning, after the show, the two are said to have had a bad clash which left some of the Meikles hotel furniture damaged.

Reports are that police were then called in to calm the situation.

However, it is not really clear what started the clash but a grapevine version says Davido told Boity, in an unconventional way, that he wanted to get in her bed, something that did not go down well with Boity, reported H-Metro.

It is then reported that Boity started throwing tantrums, shouting at Davido. Ginimbi, who had invited the two foreigners to Zimbabwe for the gig then tried to intervene, but Boity reportedly slapped him.

Reports are Davido was also manhandled by Boity during the fracas which angered a member of Davido’s entourage. The member apparently started threatening Boity, telling her never to visit Nigeria if she wants to live.

A screenshot circulating on social media that narrates the incident reads: “Then Davido’s boy was like, ‘I’ll kill you if you come to Nigeria, you’re dead, don’t even come. In fact, my dad is a very powerful man. I’ll make sure you don’t even pass by the airport”.

In response, Boity is said to have said: “I don’t care about Nigeria.”

Called for comment, Ginimbi said he was not aware of the alleged fight as he was not at the scene. He however, confirmed he had heard about the rumour of the messy fight.

“I don’t know what happened, I was not there. I also heard about it just like you did,” said Ginimbi.

The Davido concert that was filmed by acclaimed international music channel Trace is now trending on social media platforms for all the wrong reasons.

Despite his alleged confrontation with Boity, Davido, at one point during his performance, was captured confronting revellers over his belt that seemed to have been taken off him by overzealous fans who had pulled him off the stage.

After getting hold of the belt, the fans started fighting for it, a scene that led Davido to abort the show for a while as he tried to recover his belt.

Also, security that was manning the VIP gate was attacked by random heavily built men who wanted to make their way into the venue forcibly.

Also, some ladies in the VIP section were captured exchanging blows with one heavy built man also manhandling one of the ladies. Such was the behaviour at the Davido 30 Billion concert that has left many questioning what has become of nightlife in Harare. The Chronicle

Davido receives millions in one hour, after asking fans for 100m naira