Dynamos coach Lloyd Mutasa, a firm believer in the Holy Scriptures, has a strong feeling their divine appointment with victories in their league matches has come and starts with their battle against Yadah Stars at Rufaro tomorrow. 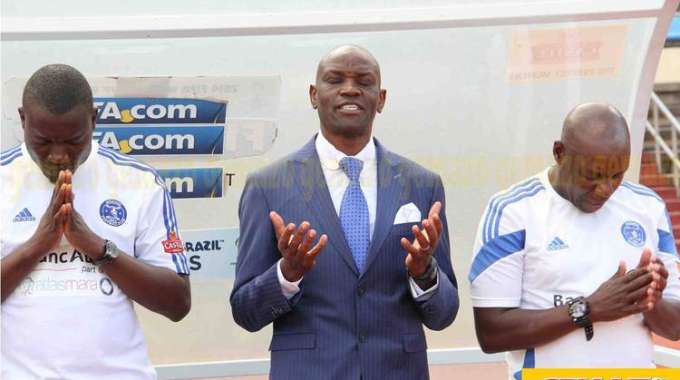 Fellow giants Highlanders, who have been enjoying a purple patch under Madinda Ndlovu, take on Chicken Inn at Barbourfields in a Bulawayo Derby likely to draw a full house while CAPS United will be hoping to continue their dominance over Taurai Mangwiro’s Triangle at Gibbo tomorrow.

But of the Big Three, it is Dynamos who are under intense pressure to start collecting points after going five games this year winless.

The Glamour Boys, as they have often done in recent years, have made a lifeless start again this season and Mutasa has been praying and working hard for a change of fortunes.

The former midfielder has been telling his boys to put their frustrations behind them and focus on reviving their campaign.

“We have always been crying that we are bad starters and we said this season we wouldn’t want to be slow starters,’’ said Mutasa.

“But look where we are, we started badly and we are saying with the way we have been executing our duties things are looking positive and the youngsters are itching to go.

“Everyone wants to get the three points and I think it’s high time as an institution we start collecting maximum points so that we catch up with the others.

“Football has always been a pressure game, but I wouldn’t want to say I am feeling it right now. You look at the arsenal that is at your disposal, you look at the potential that you have and if you have what to takes to compete then pressure will be another thing.

“In other words, I am saying we would want to bounce back. We have got the arsenal to do that. I am sure it’s only about time. God’s time is the best and I am sure we are close to it.”

Dynamos have only managed a paltry two points from five games.
They fired blanks in their last match at ZPC Kariba which ended in goalless draw.
But Yadah Stars coach Thomas Ruzive yesterday said the former champions should brace for a tough outing.

They are coming into this game against a backdrop of a 1-2 home defeat to Triangle.
“I think we have started the season well. Our guys know what it means to win games at this stage and we would want to recover from the defeat we suffered at the hands of Triangle in our last game.

“So this is a game where we are aiming for maximum points. I am happy my boys are responding very well to our training methods. They are very eager and focused. The supporters should come and enjoy football on Sunday,” said Ruzive.
Yadah have exciting prospects in players such as Leeroy Murape, Morris Musiyakuvi, Wilson Chakanyuka, Munyaradzi Chiwara, former Warriors fringe striker Simbarashe Sithole and veteran goalpoacher Ralph Matema.
They have also enlisted the services of former DeMbare midfielder Cliff Sekete.

But all eyes will be on the Bulawayo derby.
While Ndlovu has already made his intentions to revive the team’s exciting brand of football, Chicken Inn coach Joey Antipas yesterday said the Gamecocks were determined to dent their campaign.

Chicken Inn have won six of the 14 league meetings between the sides since 2011 with Highlanders only victorious twice.
Antipas, whose side suffered their first loss at Ngezi Platinum last week, was bullish ahead of the derby.

“We have done our best to prepare for that game. But as you know with derbies, anything can happen. These games are usually tense but the team that plays well on the day has big chances of winning.

“Bosso are in good form, they are unbeaten but remember there is always a first time for everything. We will try to work much harder to get maximum points,” said Antipas.

Of Genius and his Davido ‘All Black’ Party