President Emmerson Mnangagwa has made tackling corruption his campaign platform but documents made available to Nehanda Radio show that within 55 days of the military coup that saw a change of government the wife of coup leader now Vice President Constantino Chiwenga was granted a multi-million dollar contract to provide travel arrangements for the Office of the President and Cabinet.

“Please be advised that you have been engaged to provide travel services and other services as prescribed by the Office of President and Cabinet.”

Chiwenga, Mubaiwa saga, an expose of how Tagwirei…

Kawondera meets ailing ex-wife Mubaiwa for the first time in…

On a recent trip to China, Mnangagwa snubbed the troubled national airline for a more expensive private jet. While the debt-ridden Air Zimbabwe had reportedly offered to take Mnangagwa’s delegation to China for $1,9m it was reported he opted for a luxurious private jet that cost $2,3m.

Even when he travelled to Davos, Switzerland in January this year, Mnangagwa hired a private jet.

Nehanda Radio also has documents showing that a company called Home Essentials run by a Janice Mitton (Director) was also granted a lucrative contract to provide services to State Residencies including Zimbabwe House.

The letter to Home Essentials, also signed by RC Ndhlukula (Deputy Chief Secretary to the President and Cabinet) and c.c to Mr G.G Chijarira (Principal Director HR and Administration) says;

“You have been engaged to provide floral arrangements services and other services as prescribed by Her Excellency the First Lady at State House and Zimbabwe House offices. Please be advised that this extends to state functions determined by the Department of Protocol and State Occasions.” 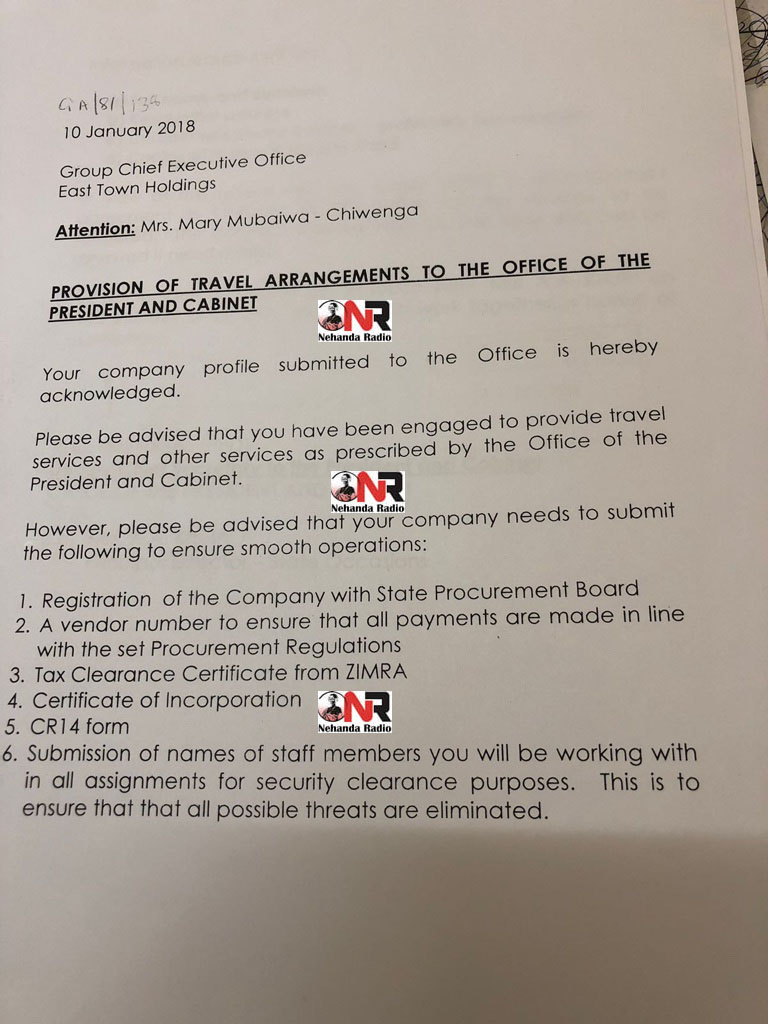 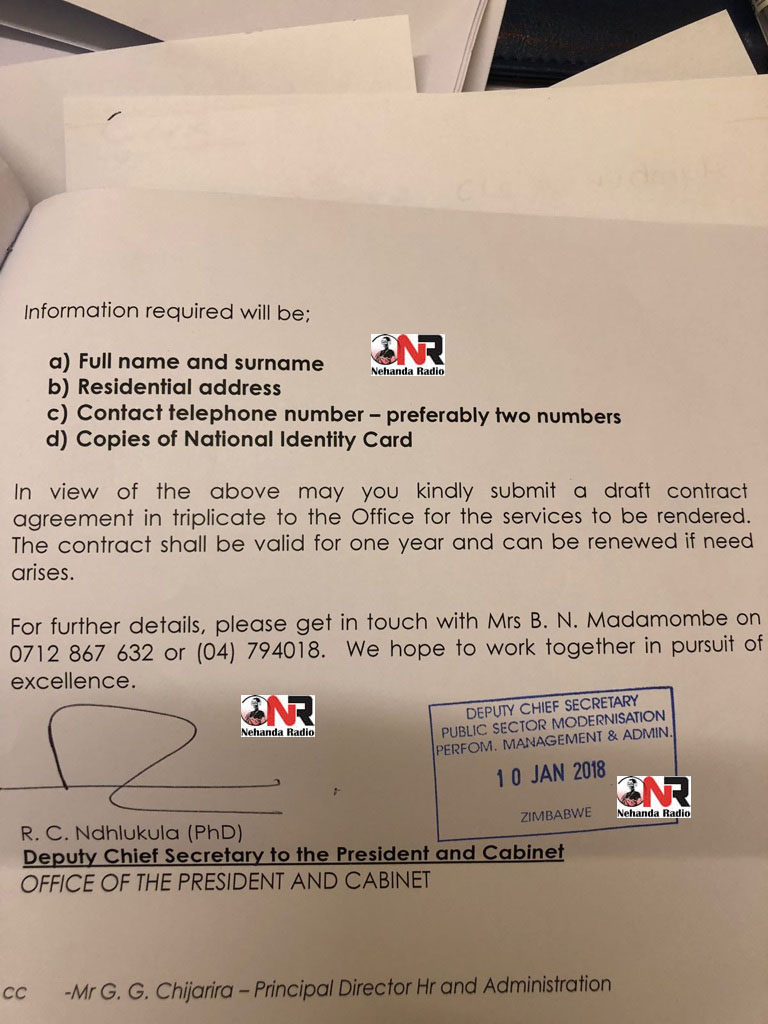 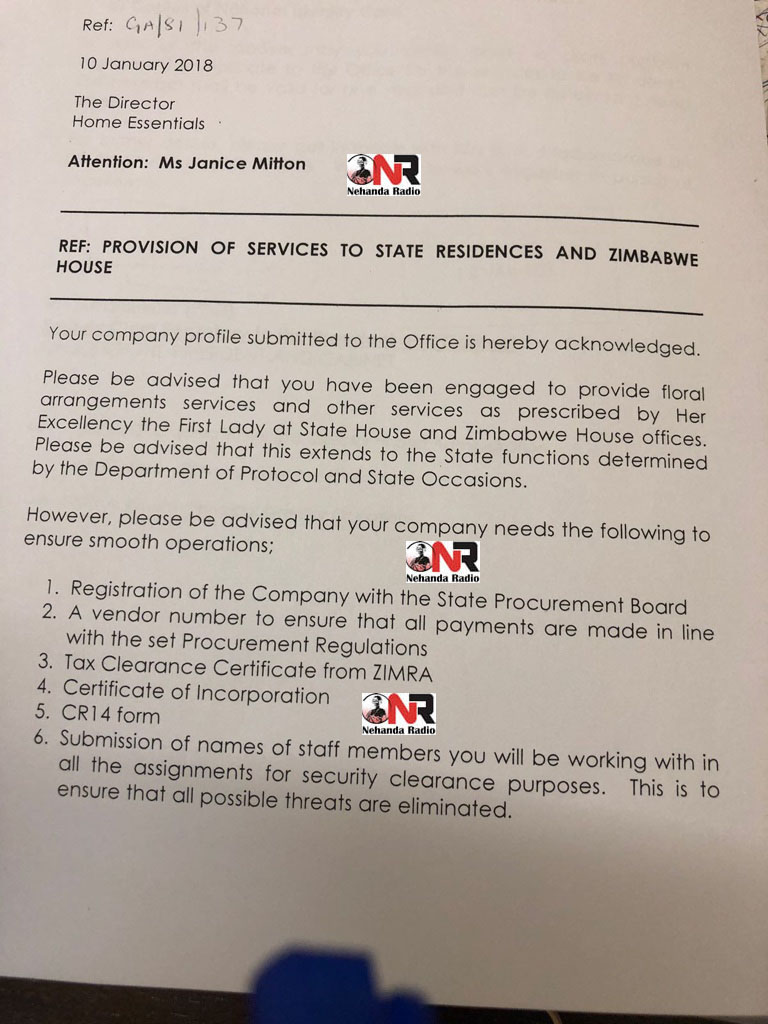 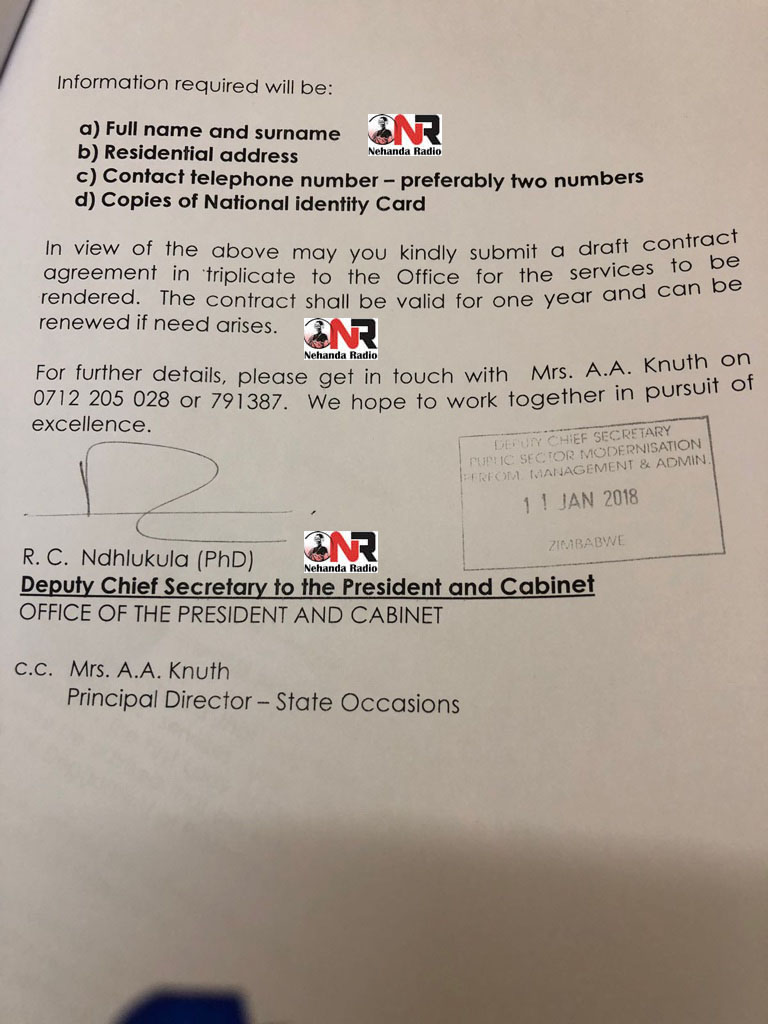 Both letters for the two contracts go on to state that the companies need to submit the names of staff members “you will be working with in all the assignments for security clearance purposes. This is to ensure that all possible threats are eliminated.” Other requirements for the companies were listed as;

*Registration of the company with the State Procurement Board (SPB)

Bizarrely the companies were engaged to provide services and then asked to later register with the State Procurement Board (SPB), the agency that is supposed to award the contracts in the first place.

Following the expiry of the term of office of the State Procurement Board, in January this year, Mnangagwa appointed an eight-member board for the Procurement Regulatory Authority of Zimbabwe (PRAZ) to oversee State procurement in the country.

Efforts to get a comment from PRAZ, Mrs Chiwenga and Ms Mitton where not successful. We will continue to seek their comment on the awarding of the tenders. Nehanda Radio

Carelse-Juul team ‘gang up’ against Zifa

Chiwenga, Mubaiwa saga, an expose of how Tagwirei ‘corruptly’ captures…