Rugeje threatens a repeat of 2008 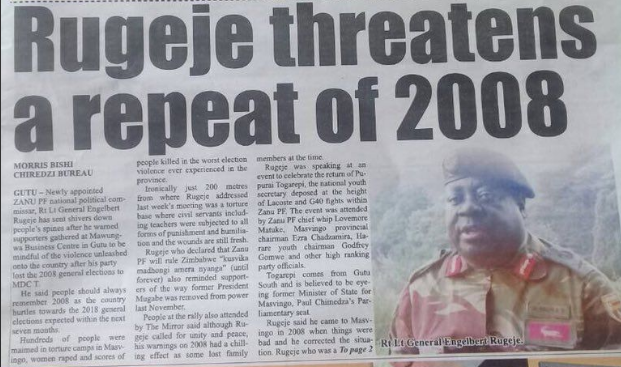 Newly appointed ZANU PF national political commissar, Rt Lt General Engelbert Rugeje has sent shivers down people’s spines after he warned supporters gathered at Mawungwa Business Centre in Gutu to be mindful of the violence unleashed onto the country after his party lost the 2008 general elections to MDC T.

He said people should always remember 2008 as the country hurtles towards the 2018 general elections expected within the next seven months.

Hundreds of people were maimed in torture camps in Masvingo, women raped and scores of people killed in the worst election violence ever experienced in the province.

Ironically just 200 metres from where Rugeje addressed last week’s meeting was a torture base where civil servants including teachers were subjected to all forms of punishment and humiliation and the wounds are still fresh.

Zanu PF Game of Thrones: Chiwenga ally booted out as…

People at the rally also attended by The Mirror said although Rugeje called for unity and peace, his warnings on 2008 had a chilling effect as some lost family members at the time.

Rugeje was speaking at an event to celebrate the return of Pupurai Togarepi, the national youth secretary deposed at the height of Lacoste and G40 fights within Zanu PF.

Togarepi comes from Gutu South and is believed to be eyeing former Minister of State for Masvingo, Paul Chimedza’s Parliamentary seat.

Rugeje said he came to Masvingo in 2008 when things were bad and he corrected the situation.

Rugeje who was a serving member of the Zimbabwe National Army at the time said he again led the party’s campaigns in the 2013 general elections and Zanu PF made a clean sweep of the 26 seats on the table.

“We are getting towards important elections this year. I came here in 2008 when things were bad. I don’t know where Masvingo had got this spirit and I came and sorted things out. I came back again in 2013 and led the campaign team and I moved around the province addressing rallies and the results were impressive and this saw the current Party president giving Masvingo the post of political commissar. I expect you to give Zanu PF all seats in Masvingo now that I am full time in politics,” said Rugeje.

Political commentator Dr Fidelis Duri, described Rugeje`s speech as tragic as it did not augur well for the country’s new political dispensation that seeks to restore international confidence and attract investment to the country’s ailing economy.

He said the speech gives credence to views held by sceptics that Zimbabwe is indeed under military rule and there will be no free and fair elections in the country this year.

“Rugeje’s threats are unfortunate, in terms of foreign policy and President Mnangagwa’s appeal to local and foreign investors for investments. Reengagement requires guarantees of a safe and secure economic and political environment,” said Dr Duri.

MDC Alliance spokesperson Professor Welshman Ncube said the group has carried out two coups in a space of 10 years and they don’t change.

“You must understand that Rugeje was the one assigned to commit murder and torture in Masvingo min 2008 and these are the same people who carried out a coup against Tsvangirai in 2008. It only shows the nature of Zanu PF where a leopard never changes its spots,” said Ncube.

NPP spokesperson Jeffreyson Chitando said Rugeje should not behave in such a manner as his own relatives can also be caught in between the violence. Masvingo Mirror