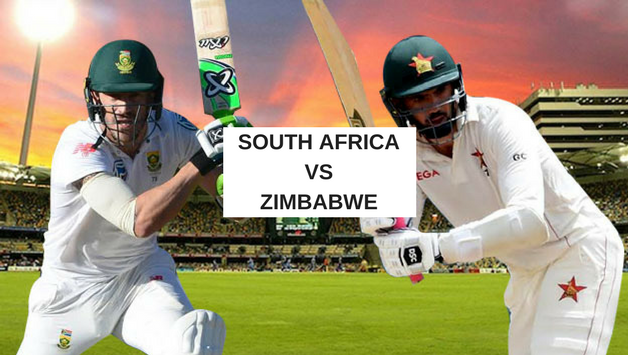 This Test match was meant to last four days. It didn’t last too much longer than four sessions. In all, it lasted 907 balls, which made it the third-shortest Test match since World War II, not counting the contrived events of the Centurion Test in 2000.

It was also the first two-day finish since 2005. Zimbabwe were the losing side then too, by an innings and 294 runs against New Zealand, and they lost this one by an innings and 120 runs, as South Africa rolled them over for 68 and 121 in a combined 72.4 overs.

Morne Morkel was South Africa’s bowling hero in the first innings, picking up his seventh five-wicket haul in Test cricket and his first in five years.

He was only needed for four overs after South Africa made Zimbabwe follow on.

Keshav Maharaj didn’t bowl at all in the first innings; he did the bulk of the wicket-taking in the second, finishing with figures of 5 for 59.

South Africa had reduced Zimbabwe to 30 for 4 overnight, and if their fast bowlers had benefited from the effect of the pink ball’s behaviour under lights in the post-dinner session yesterday, it was back to clear skies and bright sunshine on day two.

Yet the ball kept seaming – it was a testament to how South Africa’s fast bowlers were hitting the pitch harder, and more frequently landing the ball on the seam, than their Zimbabwean counterparts.

It only took 3.1 overs for South Africa to get their first wicket of the day, Morkel going round the wicket to the left-handed debutant Ryan Burl and getting one to nip back in to knock back his off stump

. Burl, driving well in front of his body, left a big gap for the ball to sneak through. Four balls later, Morkel had completed his five-for in only his ninth over.

This time Sikandar Raza jabbed a long way from his body without moving his feet, and nicked to AB de Villiers, who will keep wicket for the rest of this Test match with a hamstring injury having laid Quinton de Kock low.

The medium-fast Andile Phehlukwayo, jagging the ball this way and that, and the genuinely quick Kagiso Rabada shared the last four wickets between them.

The pick of these was Rabada’s working-over of Graeme Cremer. Having gone wide of the crease and angled the previous two balls into the stumps, he delivered one from the same angle, only this time it straightened off the pitch.

Forced to play at it, Zimbabwe’s captain nicked behind.

Zimbabwe made a better start to their second innings, not losing a wicket in 13 overs before tea. They didn’t get through that period entirely unscathed, though.

In the fifth over, Morkel got one to bounce steeply at Hamilton Masakadza as he pressed forward to defend, and the ball dealt him a numbing blow to the right elbow.

Masakadza retired hurt, leaving Chamu Chibhabha and Craig Ervine to steer Zimbabwe to tea with an unbroken partnership of 28.

Ervine looked particularly confident, sweeping Maharaj and then stepping out to hit him over the long-on boundary.

They had extended their stand to 46 when Rabada had Chibhabha caught behind with one that bounced steeper than the batsman expected.

Ervine and Brendan Taylor added 21 before the latter gave Maharaj his first wicket, a reverse-sweep ricocheting off pad and into the right hand of the diving Hashim Amla at slip, half an inch above the ground.

That wicket was the first of four in four overs, and two of them came off shots that shone a particularly harsh light on Zimbabwe’s batting.

For the second time in around three hours, Burl was out playing an ambitious drive away from his body – this time the ball seamed away and he nicked Phehlukwayo behind.

Then Raza, stepping out and getting nowhere near the pitch of the ball, slogged and skewed a catch to backward point off the outside half of his bat.

All that was left was for a couple of South African bowlers to pick up personal highlights. Vernon Philander was perhaps unlucky to only get one wicket in the first innings; he would only get one in the second too, but it would be a beauty, an away-seamer that beat Jarvis’ outside edge and hit off stump.

Then Maharaj bowled Nos. 10 and 11, Chris Mpofu and Blessing Muzarabani failing to connect with big hits, to bring up his third five-wicket haul in Test cricket. – cricinfo