Smiling faces, tears of joy and a day well spent outside the difficulties of a childhood growing up in a high density area, was the order of the day when Santa Claus visited Bulawayo’s oldest suburb Makokoba on Wednesday. 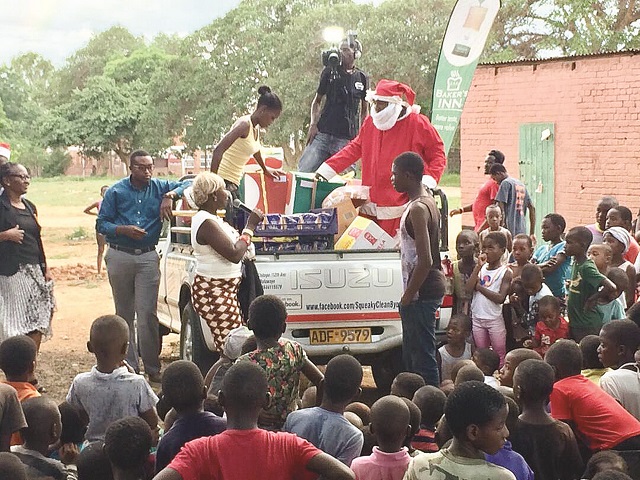 The Christmas character known as Santa Claus worldwide, but in Zimbabwe is known as Father Christmas came bearing gifts for scores of children who had gathered at Thabiso Youth Centre.

They were accompanied by their mothers and mostly grandmothers who are finding it hard to make ends meet to feed the young ones during this Christmas period.

Christmas must be a time when people wear new clothes, eat cake, and special meals such as rice and chicken.

However, the economic challenges in recent years have negatively affected how some locals celebrate Christmas. While some have little money to spend, Christmas, has over the years, been celebrated on a tight budget.

What more for the children who live with unemployed grandmothers who fend for them by selling tomatoes and other wares from the front gates of their houses in Makokoba?

The “bulk” of the little money that they earn in their petty trade goes to paying school fees for the child in the next year and buy food to feed them with a basic meal every day.

So when Father Christmas rolled into Thabiso Youth Centre, it was a special occasion for them as they got to see live, the fictitious character. Father Christmas was MC Cde Phil, clad in the signature red suit complete with a white beard.

It was a sight to behold as the excitement in children was evident in their eyes which lit up when they saw Father Christmas on a horse.

Well-wishers had donated clothes, toys, food and basic commodities to help distribute to 150 children at the youth centre.

Veteran artiste Lewis Ndlovu who put together this whole Christmas treat said he was happy with the response from well-wishers. He said they selected orphans and vulnerable children from Makokoba.

The children who were selected were given hampers that comprised four exercise books, two pens, khaki and plastic covers, a mathematical set, two Amahewu, Arenel assorted sweets, Choc Chip biscuits, two packets of Simba chips, two packets of Jiggies, a toy for boys and dolls for the girls, plus a loaf of Baker’s Inn bread and clothes.

He said: “When I came back from the UK, I sold the idea to friends and started working on it, looking for sponsorship which we got. We then did the selection of children that took us about three weeks.”

In the end it was a day well spent for the children as they were entertained by various groups such as St Patrick’s Parish Priest and Band, Masgand, Ingwenyama, KIDS (Khanyisa Isibane Drumming School) and Drums of Peace, giving them a time to remember.