Tanza Centre was a hive of activity on Saturday night as sungura ace Alick Macheso celebrated his 49th birthday. 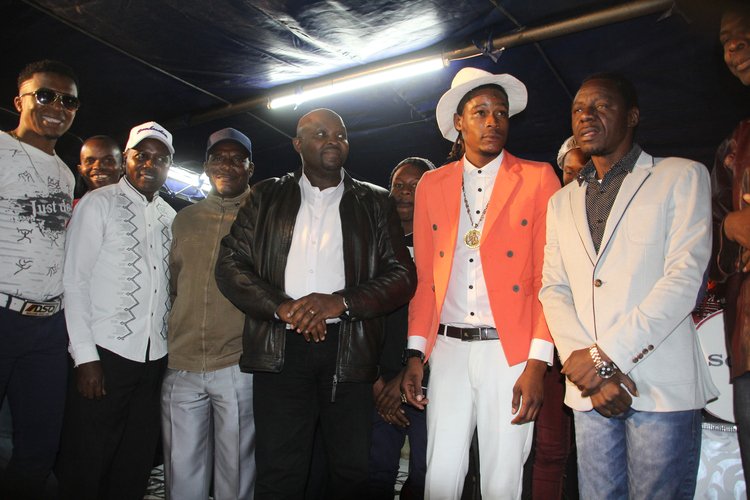 Merrymaking was the order of the night as hundreds of music lovers braved the chilly weather to watch musicians performing at the event that had a mixed bagof events.

By 10pm the venue was packed with fans that were excited to celebrate with Macheso.

Some merrymakers that had come anticipating to have a night of fun failed to last the distance after taking one too many and were visibly sloshed in the early hours of the event.

Others preferred to have fun in the club at Tanza, away from the main stage while waiting for Macheso to come to perform.

Despite paying entry fees, they were having fun in the club without following what was happening at the opening space where there was music and dance.

Faheem took fans down memory lane with his father’s yesteryear hits like ‘Tsaona’, ‘Kwatakabva Kure Nenhamo’, ‘Mai Linda’ and his own compositions.

The young entertainer, who suffered a major blow recently after splitting with his uncle Never, gave his best.

Zakaria, who is basking in glory with his album ‘Takakomborerwa’ that featured Macheso and Simon Mutambi, performed songs that made him a household name.

Though he gave a good performance, some music lovers felt he needs to improve on stage work.

“Listening to his CD and coming to live show is one and the same thing. He is definitely good, but he needs to improve on his stage work,” a fan said after the musician’s performance.

Dancehall musician Seh Calaz, who recently embarked on a’comeback’ campaign, performed his popular tracks much to the delight of the fans.

Mubhanditi, as the musician is fondly known, performed with a live band, though it is still struggling to come up with a solid act.

As usual, Zhakata was on top of his game on the night.

His yesteryear hits like ‘Mugove’ electrified his stage work.

A local dance group, Sesifikile, added icing to his cake with dances that gave merrymakers value for their money.

Their dancing routines left merrymakers convinced that they are one of the best local dance groups.

While Zhakata was still performing his last song ‘Mugove,’ all musicians joined him for the cake cutting session.

Baked by a local cake company, it had designs of guitar, keyboard and a drum set.

Musicians and promoters had time to reflect how they worked with Macheso over the years.

Zakaria thanked music lovers for their support to the ‘Tafadzwa’ singer.

“He is living a good life because of you fans. I want to thank you all for the support you are giving him. I always tell people that I feel happy seeing his success,” he said.

However, Madzibaba only gave a speech but could not share the stage with Macheso, despite having several songs they did together over the years.

Zhakata said it is encouraging to see hundreds of music lovers coming to support Macheso.

“It is a good thing to see people coming in numbers to support him. That simply shows he deserves the support,” said the ‘Mugove’ singer.

Macheso said though his wife Nyadzisai was not at the event, she was very supportive.

“She is at home with our grandchildren, but she has sent me with a ‘thank you’ message to all our beloved fans. It is not easy to have all these people and musicians coming to celebrate with me. I am grateful,” he said.

However, the musician could not share his cake with fans, only promoters, musicians and friends who made it to the stage got a taste of the cake.

Soul Jah Love said it was good to have a veteran musician who leads by example.

The two promised fans a duet, but to date it has not been released and on the night they could not say anything about it.

“I have been sent by your fans in Marondera to congratulate you for another year. It simply means we are expecting more as you grow,” said Masaiti.

He said after a request by fans in Marondera, he will also host a similar event next weekend at his place.

“They are ready to celebrate with him in Marondera,” he said.

After cake cutting, Soul Jah Love was the next musician on stage.

Soul Jah Love and Bounty Lisa Though their marriage is said to be on rocks, the two went on stage together.

Efforts by this reporter to get comment about their affair were fruitless as they went to their car and drove off soon after their act.

He was even evasive to fans who were cheering at him while leaving the venue.

Away from the surprise, the musician managed to give his best.

Though he had no live band, his backing group Conquering Family had some dancers that spiced up his act.

Soul Jah Love was one of the crowd’s favourite acts.

The musician played most of the songs that have been hits.

However, he could not give his wife Bounty Lisa time to perform a song.

Macheso was the last musician to perform. He started his performance with song ‘1940’.

Speaking at the sidelines of the event, the musician’s publicist Tich Makahamadze said it was a good experience to celebrate his birthday in style.

“We want to thank our fans for the unity they showed as well as musicians for coming to support us.

“I am sure if we remain united like this we will definitely make it in the music industry,” he said.

He said the unity has come as a major boost to their album that will be released sometime in August.

“All is taking shape for the album release and with this support we get encouragement. This August the album will be coming out,” he said.

Makahamadze said after the birthday, they will continue with their shows, sampling songs from the new album.

“New songs are being performed at our shows and the outreach will continue till the day we release the new offering,” he said. The Herald