Lionel Messi: Barcelona hero proves he is still the best around with 500th goal

Barcelona blew La Liga’s title race wide open with a sensational 3-2 victory in El Clasico at Real Madrid on Sunday night, and the identity of the match-winner was no surprise whatsoever: Lionel Messi. 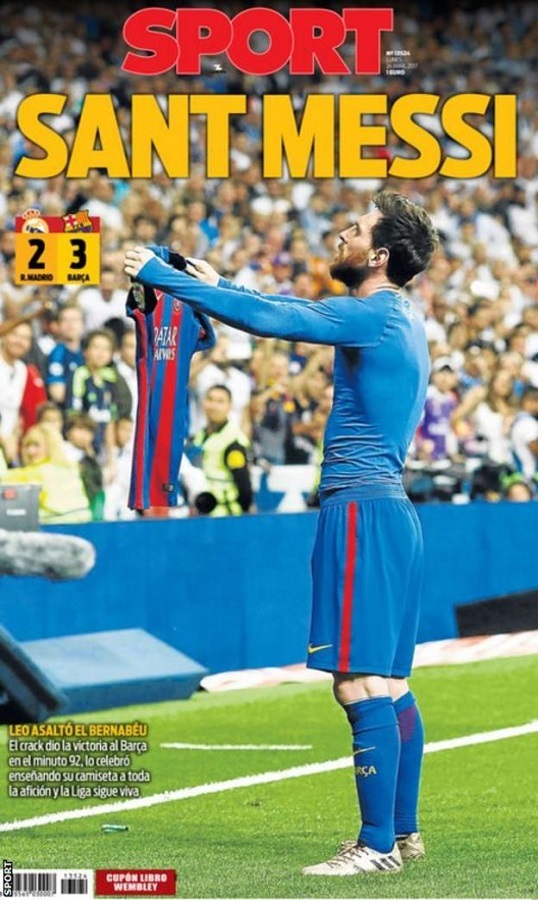 The Argentine ace netted twice, including the winner with just 12 seconds of stoppage time remaining, to allow his team to leapfrog the hosts at the top of the table – even though the title is still under Real’s control because they have a game in hand.

Not only that, but he is now up to 500 goals for Barcelona. Not bad for a player who is supposedly on the decline.

It wasn’t just Messi’s goals which made this a special performance, because he was more or less unstoppable all night.

In fact, the only way that Real could stop him was by fouling him, with Sergio Ramos earning a straight red card for a wild two-footed lunge while Casemiro was a little lucky to escape dismissal for repeated fouls and Mateo Kovacic also earned a yellow card for fouling the Argentine.

Despite forcing his opponents into such desperate measures, Messi still managed six shots on goal, four of which were on target – more than any other player. He also embarked upon seven dribbles, again higher than anyone else, and his 72 touches of the ball were more than any Real player (Dani Carvajal had 71).

And all of that came despite Messi playing most of the game with a badly bloodied mouth following a first-half collision with Marcelo (accidental according to white-shirted fans; deliberate according to those in red and blue) which saw him briefly leave the field for treatment.

Mundo Deportivo, meanwhile, hailed Messi as ‘unique’ and described his winning goal as a ‘work of art’, while also complaining – in a style typical of the constant back-biting between these two clubs – that Casemiro and Marcelo should also have been sent off for their challenges on Messi.

Messi’s dramatic late strike at the Bernabeu was not only a special moment because it was a Clasico match-winner, it also marked his 500th senior goal in Barcelona colours – and helped reassert his status as the world’s best.

He has reached that figure in just 577 games, and amazingly he has been going along at a rate of more than a goal per game ever since being converted from a right winger into a more central position by Pep Guardiola in 2009.

Not surprisingly, Messi’s 500 goals make him easily Barcelona’s leading all-time scorer, more than doubling the tally of next-best Cesar Rodriguez Alvarez, who managed 232 between 1942 and 1955.

His greatest single goalscoring season came in Guardiola’s last at the club, 2011-12, when he netted 73 goals in 60 games, and 2012 also saw him set an all-time record by scoring a ridiculous 91 goals in the calendar year – breaking the previous best of 85 set by ex-Bayern Munich star Gerd Muller.

Messi’s goalscoring heroics have led to a long list of personal honours, including five Ballon d’Or awards for the best player in the world.

Messi answers his critics in style

Messi’s incredible performance on Sunday night was the perfect response to critics who have recently been arguing that he is in decline, with his talents supposedly on the wane as he approaches his 30th birthday in June.

Those criticisms particularly pinpointed Messi’s ongoing struggles with Argentina and his disappointing latter contribution to Barca’s Champions League campaign, which came to an end with last week’s 3-0 quarter-final aggregate defeat by Juventus.

Although Messi scored 10 goals in the Champions League group stage, including hat-tricks against both Celtic and Manchester City, he was conspicuous by his absence in the knockout stages. He played poorly in the away leg losses at Paris St-Germain and Juventus, and contributed just a penalty in the remarkable comeback against PSG – which ultimately counted for nothing following their exit in the next round.

Most of the reports of Messi’s allegedly impending slide towards mediocrity came from the international press, with one English newspaper columnist claiming that he was ‘imploding’ after getting suspended for Argentina by swearing at a linesman, and now playing second fiddle to Neymar (who was himself suspended for Sunday’s Clasico).

Outspoken former France manager Raymond Domenech should also be feeling pretty foolish, having recently claimed that Messi was on the wane and “gradually losing his gifts”.

In fairness, the Spanish media never really joined in with the rhetoric of Messi’s so-called decline, noticing that he was not only the leading marksman in this season’s Champions League but also top scorer in La Liga.

Indeed, his 47 goals this season in all competitions make him the highest scorer in Europe’s top five leagues. Not bad for a player who, we were being told, is past it.

Messi’s goalscoring feats this season are even more impressive when you consider that he is effectively playing as a midfielder in Barca’s new tactical set-up.

Although the formation was too fluent (to be kind… some would say chaotic) to be precisely pinned down, Sunday’s game at the Bernabeu saw him loosely appear at the point of a midfield diamond, with Ivan Rakitic to his right, Andres Iniesta to his left and Sergio Busquets offering security behind.

Manager Luis Enrique, who will leave the club at the end of the season, has tried out various formations this season, with Messi’s position fluctuating from the right wing to central midfield and occasionally an out-and-out striker.

But he is generally playing deeper than previously, dropping back into midfield to link the play in a team which has often struggled for overall effectiveness. His playmaking role is shown by the fact that he ranks sixth in La Liga for assists (8), and fifth in ‘key passes’ (2.3 per game).

There is also a sense that Barca are sometimes dangerously close to being a one-man team, with Messi carrying the load for a squad who lack clear tactical direction and struggle to find a purposeful style of play, especially against opponents who press them high up the pitch to cut out their ability to build from the back.

In truth, Messi is not exempt from criticism for the poor overall team structure, with his lack of defensive discipline sometimes forcing the rest of the players to fit in around him, and Enrique looking as though he is trying to devise a system which allows his star man to do as little defending as possible.

What next for Messi?

Despite his latest match-winning heroics, there is some doubt over Messi’s longer-term future because he only has one year remaining on his current Barca deal and negotiations over a new deal have been dragging on for months.

That has sparked hopes among potential suitors that he may be lured away from the club he has represented from boyhood, with Manchester City reported to be keen on reuniting him with Guardiola while the riches of the Chinese Super League have also been dangled as a juicy carrot.

However, there could finally be an imminent breakthrough for Barca, with Messi’s father Jorge – who also manages his son’s business affairs – arriving in the Catalan capital last week to meet with club president Josep Maria Bartomeu.

Of course, Messi’s future could partly depend on the identity of the new manager to replace Luis Enrique, and it will be fascinating to see how next season’s man at the helm accommodates Messi – in particular, whether his move into midfield will become permanent.

There is also uncertainty at international level, with Argentine recently sacking manager Edgardo Bauza after just eight games in charge.

Sevilla’s Jorge Sampaoli is the favourite to take over, and his first priority will be getting Messi fully onboard as the Albiceleste attempt to rescue a mixed World Cup qualifying campaign which has left their place in Russia next summer in jeopardy.

But before all that, though, thanks to his remarkable performance on Sunday night, there’s still a La Liga title to be won.