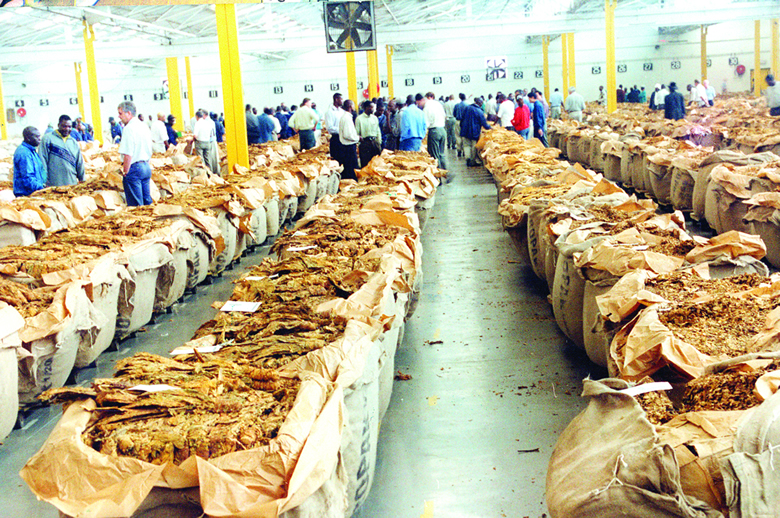 Scores of tobacco farmers spent the Easter and Independence holidays at the three tobacco auction floors in Harare, while waiting for their banks to release cash upon their reopening on Wednesday.

While some of the farmers had to seek refuge at their relatives’ homes in the capital city, and in other satellite towns namely Chitungwiza, Norton and Ruwa, others were not so lucky.

The unlucky ones were forced to stay put at the auction floors until the banks re-opened for business on Wednesday.

This year, the Tobacco Industry and Marketing Board (TIMB) licensed three auctioneers to buy the golden leaf — as the tobacco crop is affectionately known — from farmers.

These are the pioneering Tobacco Sales Floor owned by TSL Limited; Boka Tobacco, founded by the late business magnate Roger Boka; and Premier Tobacco Auction Floors — the smallest of the three.

Shape up or ship out, RBZ tells banks

It was a sad tale of despair all round at the auction floors as farmers braved the five-day holiday away from their families, waiting to access the elusive cash from their banks.
Zimbabwe is deep in the throes of a cash crisis linked to several factors.

At the core of the liquidity crisis is the country’s inability to produce enough for export. With imports chewing a huge chunk of Zimbabwe’s earnings, it has been difficult for banks to keep the country well oiled in terms of its cash requirements.

As a result, depositors have not been able to get their cash on demand.

Currently, banks are limiting cash withdrawals, with some dispensing as little as US$20 per week.

Last month, the Reserve Bank of Zimbabwe (RBZ) directed banks to be more generous with tobacco farmers whom the nation is banking on in terms of its foreign currency requirements.

Last year, tobacco earned US$1 billion in export revenue receipts ahead of platinum and gold.

The previous season in 2015, export earnings were around US$855 million as sales volumes increased 12 percent on prior year to 152 million kilograms (kgs), with cigarette makers in China buying 62 million kgs for US$513 million or 60 percent of total earnings.
So far this season, farmers have sold tobacco worth about US$126 million.

For the typical indigenous farmer, having money in the bank is not good enough.

They still need physical cash to transact in their respective communities where plastic money is still an alien concept.
To cater for their cash requirements, the RBZ recently directed that tobacco farmers should be given US$1 000 per initial sale, hoping to put smiles back on their faces in the wake of the cash shortages.
This has, however, turned out to be a pie in the sky for a lot of the tobacco farmers who still cannot access the cash as per central bank’s directive.
Before the Easter and Independence holidays, most banks could only manage to dispense US$300 per day for initial sales, with some farmers even failing to access that amount.
As a result, most farmers spent close to a week at the auction floors in a bid to withdraw the full US$1 000. Last month, police had to be called in to quell protests at the tobacco auction floors when farmers ran riot when banks reduced the withdrawal limit to US$300.
Banks were clearly overwhelmed last week.
Some of the banks could only manage to serve 40 clients per day due to dwindling cash reserves.
By the time people took a break for the holidays on Thursday last week, hundreds of farmers were yet to receive payment for their initial sales, a month after the auction floors opened on March 15.
As for Prosper Mutabe from Nembudziya in the Midlands Province, even though he has relatives in Harare, they could not accommodate him over the Easter and Independence holidays because they had made prior holiday arrangements outside the big city.
At the same time, he could not go back to his rural home empty handed because his workers were also expecting their dues in the hope of making the Easter holiday a memorable one for their families.
“I came from Gokwe and my relatives who stay in Harare have gone away for the holidays so I am stuck here,” he said.

“Back home, my workers need their payment in cash, but I am failing to access my money. I thought selling my crop this year would come with good fortunes because the price was fairly good, but here I am — struggling,” he said.

Many other farmers had sad stories to tell about sleeping in the open.

To make matters worse for them, it was exceptionally cold throughout the holiday.

Those without any cash to spend were issued with US$1 sadza coupons at the auction floors, allowing them to have meals on credit, which would be repaid once their accounts are credited.

The only other source for cash for most farmers became the cash-back facility at some retail outlets. But then again, the RBZ has set the maximum limit for any cash back facility by retailers and wholesalers at US$20 or $20 bond notes only, which means that option has become unviable for the tobacco farmers.

Because of desperation, some of the farmers have had to move their bank accounts from one bank to another in the hope that they would get better service.

To some, it became the case of jumping from a frying pan into a fire as their payments were still to reflect in their new accounts at the time of going for the holiday break.
Jesta Maunganidze, a farmer from Makonde in Mashonaland West, was one of those who had to regret the accounts switch.

“Those who bought my tobacco told me to change my account because they were failing to process payment using the account I had given them, but up to now, four days later, the transaction is failing to reflect. I cannot go back home like this, so I will wait to hear what they have to say,” she said.

“There have been some bottlenecks in the systems that need to be ironed out so that farmers do not have to spend so much time at the auction floors,” he said.

“This is why farmers are spending days at the floors until they get their last batch of cash. The challenge is that they are given so much money per day, so banks reduce the daily limit so that they are able to serve more customers,” added Ambrose.

RBZ governor, John Mangudya, has come to the defence of banks, saying balances in their nostro accounts were continuously declining hence they were unable to release all the cash on time.

“Tobacco is paid for upfront. Sometimes banks might take time to credit the merchant account because it is not yet funded. The merchant’s account has to be debited for the farmer’s bank account to be credited, but you will notice that banks’ nostro accounts have to be funded,” Mangudya was quoted saying recently.

Zimbabwe Commercial Farmers Union president, Wonder Chabikwa, said tobacco farmers should be prioritised in getting their cash because they are the country’s only hope of improving the liquidity situation.

“This is worrisome because we had agreed that farmers who deliver their first crop would get US$1 000 (for initial sales) and US$500 for the second so that farmers can cover their cash needs like labour. They failed to do that because farmers still cannot get money from banks,” he said.

“This is inconveniencing the farmers. We are worried that what we agreed upon is not being implemented, all players should work together to prioritise the farmers because we cannot afford to kill the goose that lays the golden egg,” he added.

There is a school of thought that says by demanding cash when they could use Point of Sale facilities, tobacco farmers are exerting unnecessary pressure on an already desperate financial situation whereby the country is facing one of its worst liquidity crises since dollarisation in 2009.

Apart from the cash crisis, the tobacco selling season has also been dampened by the malfunctioning of the e-marketing platform on the initial day of sales, forcing TIMB to revert to the old manual system.

The selling season has also been dogged by the deteriorating quality of tobacco due to incessant rains in the country’s tobacco growing areas.

While this has an effect of pushing down prices of the golden leaf, it also dampens the spirits of farmers who would have toiled in the fields in anticipation of better returns.

As of Wednesday last week, tobacco seasonal sales rose by 42 percent, raking in US$126 million, compared to the same period last year as deliveries increased ahead of Easter and Independence holidays.

TIMB said the volume of tobacco sold was up 42 percent to 47 million kg compared to 33 million kg valued at US$89 million kg during the same period last year.

The average price per bale was US$2,68 , down from US$2,70 recorded over the same period last year.

The tobacco selling season is expected to improve the liquidity situation and assist in addressing the cash shortages. Financial Gazette

Shape up or ship out, RBZ tells banks