The smaller than expected crowd that turned up at National Electoral Reform Agenda (Nera)’s Wednesday rally indicates the alliance will face difficulties in acting as a bloc in 2018’s elections, political observers said yesterday. 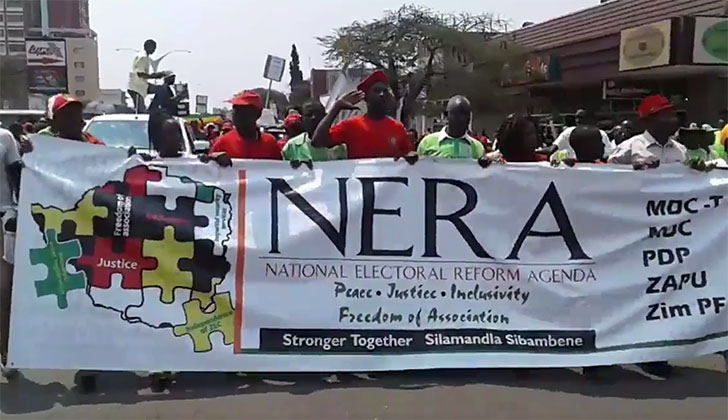 They said the fact that a handful of people attended the rally to receive feedback on the demand to disband the Zimbabwe Electoral Commission (Zec) ahead of the elections shows that Nera — a grouping of 18-plus opposition political parties — lacked supporter at national level.

Patson Dzamara, brother of pro-democracy activist Itai, who disappeared more than two years ago, said it was disappointing that Nera failed to attract the numbers it predicted.

“I wonder what more incentive we need to face (President) Mugabe’s morbid regime head-on. Elections are around the corner and Zimbabweans are still dilly-dallying. At this rate, we may not make it through,” he said.

Some 100 or so protesters gathered at an open space outside the Central Business District (CBD) — popularly known as Freedom Square — after police banned the planned street march into the city centre.

Riot police armed with truncheons and water cannons patrolled the CBD to prevent the protest march.

However, Morgan Tsvangirai-led MDC said the use of teargas and rubber bullets by police inexperienced in crowd control added to the shock value and pushed even more sympathisers away from Nera demos.

“The people of Zimbabwe are traumatised by the brutal and thuggish treatment that is routinely meted out to demonstrators by the police and other security agents,” MDC spokesperson Obert Gutu said.

Analysts opined that Nera risked facing major defeat as an alternative after the poor turnout at the rally, questioning if the party will form a tacit electoral agreement ahead of the 2018 vote.

Analyst Takura Zhangazha said Nera must fully understand and explain to their party members the full import of a grand opposition coalition.

“Any talk of a coalition is of limited consequence if the opposition parties that seek it are inherently weak or ruled by diktat,” he said.

“Regrettably, most of our opposition political parties have hidden behind the popular and organic cloak of social democracy while placing neo-liberalism — privatisation, free markets — at the centre of their ‘alternative’ policy proposals.

This has led them, even if they will deny it, to be speaking the same broad policy language of the ruling party. The only difference is the fact that the latter couches its neo-liberalism in an on the surface ‘radical nationalism’ and in pursuit of an ancillary state capitalism.” Daily News

In the midst of political confusion

Obert Gutu: I am not going to be involved in any political party politics