By Gift Phiri and Bridget Mananavire

Thousands of families could be relocated from Penhalonga, just outside Mutare, amid claims that rich diamond deposits have been discovered in the area — although the government is dampening expectations. 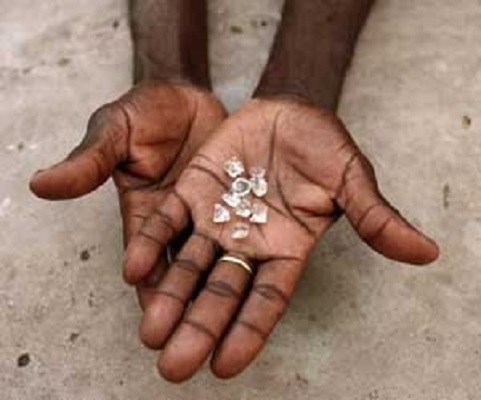 This comes as production at the Marange diamond fields, also in Manicaland, has plummeted to an all-time low due to the government’s ill-advised move to grab the operations of mining firms there.

At the same time,  one of the firms extracting gems in Marange, Jinan, is said to be already winding up its operations — pulling its $4 million equipment from the area at the weekend.

Deputy mines minister Fred Moyo told the Daily News yesterday that it was premature to conclude that there was a new discovery of diamonds in Manicaland.

Chiadzwa Part 2: A story no one would ever tell… what…

He said the government-run Zimbabwe Consolidated Diamond Company (ZCDC) was still exploring for diamond-bearing kimberlite, with the chance of success unclear at this stage.

But ZCDC officials convened a meeting with villagers at Tsvingwe Primary School, in Penhalonga, last week to inform them that the State company “suspected” that there were diamonds in the area.

However, shocked residents were unequivocal that they did not want diamond mining in their area, given what has happened in Chiadzwa.

This was after ZCDC officials had told villagers that those to be affected by removals would be compensated.

Moyo said if ZCDC officials had said that, then they had jumped the gun.

The founding director of the Centre for Natural Resource Governance (CNRG), Farai Maguwu, said the government was lying when it said it “suspected” there were diamonds in Penhalonga.

“The fact is that exploration has already taken place there. Unless there is a very strong and well co-ordinated resistance by the community, our beautiful Tsvingwe, as we know it, is gone.

“If diamonds are discovered in Borrowdale Brooke, where the big people live, what will ZCDC do? What happened in Chiadzwa will not be allowed in Penhalonga. We say no to extractivism and say yes to life,” Maguwu told the Daily News.

More than 1 000 families were relocated from a village adjacent to the Chiadzwa diamond field in Marange to Arda Transau in 2009, to pave the way for mining.

Although Arda Transau had been touted as a new township with tarred roads, shops and health clinics, eight years on villagers are bitterly disappointed that the promised education and health facilities were all bottled smoke.

Seven mining companies licensed to mine the Marange area were ordered in March last year to leave by the government after Mugabe made damning allegations that the firms had spirited away $15 billion in diamond revenue.

This saw the government taking over all diamond operations in the area through the ZCDC, which is now eyeing the Tsvingwe fields.

Some of the affected diamond companies, Mbada and Anjin Investments, have since dragged the government to court over the matter.

Meanwhile, Jinan was winding up its operations in Chiadzwa at the weekend, with its equipment which is enroute to the Democratic Republic of Congo (DRC), temporarily stuck at Forbes Border post in Mutare.

Despite being touted as the country with one of largest alluvial diamond deposits in the world, Zimbabwe has failed to account for the revenue from Chiadzwa diamond mining.

Mugabe last year shocked the nation when he claimed that more than $15 billion had been lost in Chiadzwa, although to date no official findings have established where the money went. Daily News

Chiadzwa Part 2: A story no one would ever tell… what US$15 billion could have…