A US-backed force of Syrian Kurdish and Arab fighters say they have taken full control of a key airbase held by the Islamic State group (IS) near Raqqa. 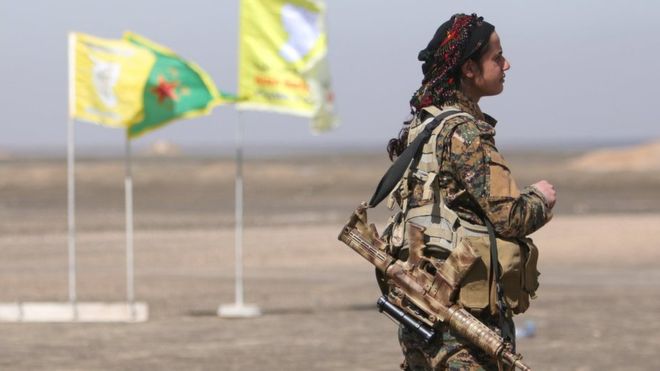 Its capture is seen as a significant step in the fight to drive the jihadists out of the city, which has become their de facto capital.

Talal Sello, a spokesman for the Syrian Democratic Forces (SDF), said they had seized Tabqa airport from militants.

The Kurdish-led fighters are continuing to advance towards the city itself.

However, civilian rights groups have expressed safety concerns for citizens still living in the area.

The UK-based Syrian Observatory for Human Rights said coalition air strikes have killed at least 89 civilians over the past week.

The capture of the military airport is the first major success for the SDF since the US-led coalition airlifted its fighters to place them behind IS lines last week, the BBC’s Arab affairs editor Sebastian Usher reports.

The Tabqa airbase was seized by IS militants in 2014 from the Syrian army. The jihadists then carried out one of their worst atrocities – a mass execution of captured soldiers.

Its capture by SDF fighters was part of an offensive aimed at also taking control of the Tabqa dam – the largest in Syria – as well as Tabqa town.

Earlier, there was fears of serious flooding after IS warned that the Tabqa dam could collapse. However, the dam appears intact.

The US-led coalition denied the jihadists’ claims that it had targeted the facility with air strikes, leaving it vulnerable to failure.

“The dam has not been structurally damaged to our knowledge and the coalition seeks to preserve the integrity of the dam as a vital resource to the people of Syria,” a spokesperson told the BBC.

On Sunday there had been conflicting reports about damage to the dam – about 40km (25 miles) upstream of the Raqqa on the Euphrates river – with civilians reportedly fleeing to higher ground.

Although IS media channels warned the dam could burst, the militant group later reportedly sent cars around Raqqa with loudspeakers, telling people it was intact and they had no need to evacuate.

IS took full control of Raqqa in January 2014, and it has since become the capital of its self-proclaimed caliphate of land across Syria and Iraq.

Raqqa was Syria’s sixth-largest city before the conflict, with a population of about 220,000. IS has banned civilians from leaving the city without permission, watching international TV, or talking by phone to anyone considered an enemy of IS, citizens inside have said.

IS forces in Raqqa are believed to have been swelled by thousands of jihadists who have left the Iraqi city of Mosul since it was besieged by Iraqi and coalition forces.

Aside from being strategically important and providing electricity to the region, the Tabqa dam complex is believed to be used as an IS headquarters where leaders plot attacks outside Syria, according to the Pentagon.

The United Nations recently warned that damage to it could lead to massive-scale flooding.

There were similar concerns last year for a dam outside Mosul, an IS stronghold in northern Iraq.

If the Mosul dam burst, floodwaters could kill 1.47 million Iraqis living along the River Tigris, the US embassy said. However, the dam has so far remained in operation.

US warplanes are supporting the Iraqi army’s mission to retake Mosul from IS. BBC News

Bafana needed the ‘Shakes’ up from overseas

US says it did not approve Turkey’s Syria offensive