Five people, two of them police officers, believed to be Highlanders’ Football Club supporters, died while five others were critically injured in an accident along the Bulawayo-Gwanda Road on Saturday night. 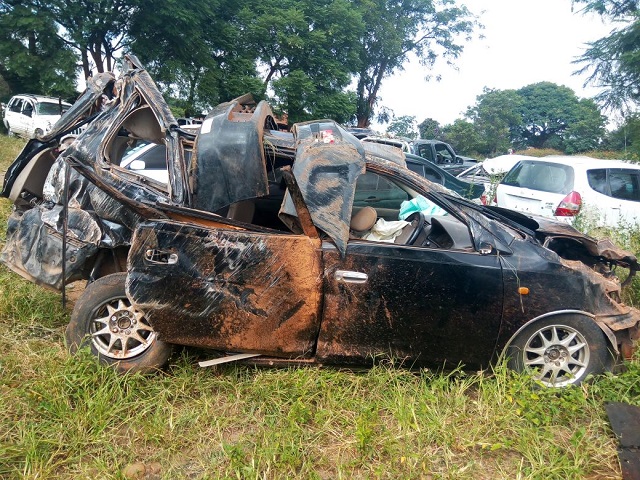 The accident occurred at around 8PM at the 20km peg, just before the meandering escarpment popularly referred to as ‘Danger’ when the driver of a Toyota Gaia they were travelling in lost control of the vehicle and rammed into a tree.

The nine passengers and driver were coming from Barbourfields Stadium where Highlanders had taken on Caps United in the final of the ZNA Commander Charities’ Shield.

Bosso lost the match 2-3 after a penalty shootout following a 0-0 stalemate in regulation time.

11 armed robbers caught in the act

The injured victims are admitted to United Bulawayo Hospitals (UBH).

“I can confirm the death of five people who were involved in a car accident at the 20km peg along Bulawayo-Gwanda Road near the danger point. The driver lost control of the car and it veered off the road before it hit a tree. Two people died on the spot while two others died upon admission to hospital. The other one who was in the intensive care unit died today (yesterday),” said Nyathi.

He said they were travelling in a black Toyota Gaia and there were 10 people on board.

Chief Supt Nyathi appealed to motorists to be cautious. A source said the crew was coming from a soccer match at Barbourfields Stadium.

“They were travelling in a black Toyota Gaia driven by Constable Nation Mpofu (33), who sustained bruises all over the body and is said to be in a stable condition,” he said.

He said the vehicle belongs to one Edmore Chinungwa (43) of Spitzkop North in Gwanda.

Two of the deceased persons are yet to be identified.

In September last year, six Bosso supporters died while two others were seriously injured when a pick-up truck they were travelling in veered off the road and hit a tree along Falcon Road in Esigodini. The Chronicle

11 armed robbers caught in the act