Trump has not asked FBI about wiretapping claims

President Donald Trump has not spoken to the FBI about his claim that his predecessor wiretapped his phones. 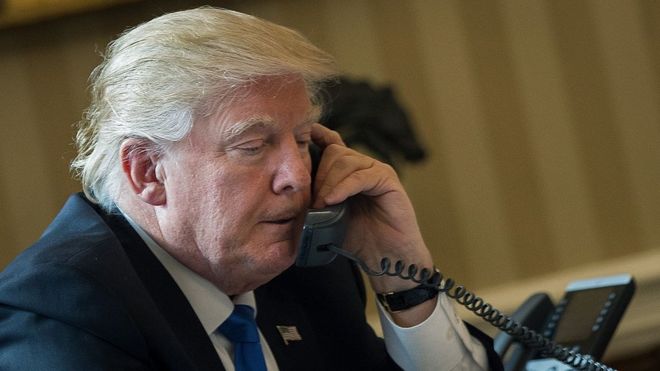 Mr Trump on Saturday accused Barack Obama of ordering surveillance at Trump Tower in New York during the election, but has offered no evidence.

FBI Director James Comey has reportedly rejected the allegation – one report said he was “incredulous”.

But White House spokesman Sean Spicer said on Tuesday the president has yet to speak to him about it.

The “smartest way” to address this is for Congress to extend its current investigations to include this issue, he said.

Mr Comey has asked the US justice department (DOJ) to publicly refute the president’s claim, according to the New York Times and NBC.

He is said to have asked for this because the allegation implies the FBI broke the law. The DOJ has not commented.

When pressed about wire-tapping at the daily news briefing, Mr Spicer said the president has “absolutely” no regrets about the explosive claims.

“The House and Senate intelligence committee have the staff and the capabilities and the processes in place to look at this in a way that’s objective, and that’s where it should be done”.

He added that the media should let the Senate and House intelligence committees “do their job” and “then report back to the American people”.

Mr Spicer argued that if Mr Trump spoke to Mr Comey it could be viewed as interfering with an investigation.

US Senator John McCain on Monday also called for Mr Trump to release any evidence he has to support his claim.

“I think the president of the United States, if he has any information that would indicate that his predecessor wiretapped Trump Tower, then he should come forward with that information. The American people deserve it,” said Mr McCain, a Republican from Arizona.

The president has offered no evidence to back his claim that he was monitored.

James Clapper, the director of national intelligence at the time of the election, said there no wire-tap activity mounted against Mr Trump or his campaign.

Mr Trump’s allegations are the latest twist in a controversy over whether his campaign had been in contact with Russia during the election.

Both the House and Senate intelligence committees are currently looking into the possibility of Russian interference during the 2016 election, inquiries launched in January.

But now the White House has asked both Congressional committee to also examine whether Mr Obama abused his powers.

Democrats have accused Mr Trump of using the claim to distract from his staff’s ties to Russia.

A US president cannot legally order the wiretapping of a US citizen.

A warrant, if it existed, would most likely have been ordered by the Department of Justice. BBC News